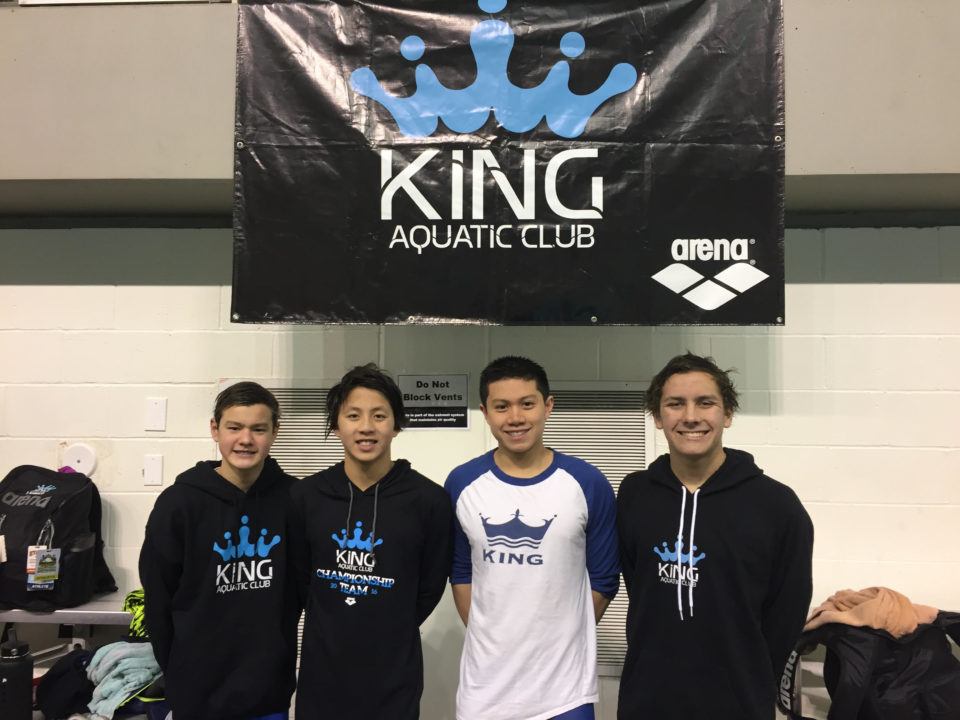 Dang and Lu were members of the former record-setting relay and today’s record-setting relay. Dang rolled to a 55.48 on the breast split this time, which was a few tenths faster than the split he posted last time around. Lu, on the other hand, made the switch from back to free. He was the big difference maker, splitting over a second faster than the free split on their previous relay with his 47.26.

Putting this out here until news of the Toronto meet gets reported.

With Penny and Taylor’s results from world champs and Rebecca Smith’s (1:52) and Kayla Sanchez’s (1:55) results from today. Those four Canadian 16&under girls would break the 4×200 world record from their times this month.

That’s impressive!! What’s their secret up there these days? Do the girls put maple syrup on their Wheaties?

3/4 swim at the High Performance centre… Taylor trains in Scottsdale… they have some fast guy named Ryan . . .

Smith and Sanchez have only been at the centre since September.

What teams have E relays, mine doesnt even have B ones

My kid was on our H relay last weekend… we have a lot of 11 & u boys. Besides once you have your A squad most parents don’t care which team they end up on. Personally would rather my kid get a lead off on a slower team so they can PB in 50 Back or 50/100 Free.

It’s a shame Ethan Dang is already peaking. I had high hopes for him to go to Tokyo, but not anymore. I don’t know if he’s mentally checked out. It could be his coach’s fault. Whatever it is, I’m just sad to see such good talent go to waste.

Daniel and Ethan won’t be training partners very often. Daniel Roy lives in Spokane other side of state than Ethan Dang. Daniel swims for KING so he has someone to travel to big meets with and relays. Daniels coach in Spokane left his old team left so he joined KING.
Amazing but Daniel does most of his training on his own! Great Kid and so is Ethan!

3
0
Reply
Coach of Many
Reply to  PNS Swim

Shark, who are you to cast any judgement on this kid? You obviously know nothing about him or his coaches. Ethan will be just fine. You, who knows.

Shark Aquatics you have no idea what you are talking about. He’s a 14 year old boy and still going best times. Keep those comments to yourself. I hope your comments motivate the young fella because he has a lot more going for him than someone who posts something like what you just did. Maybe he’I’ll send you a postcard from Tokyo.

OK but don’t be too sad. Rather than judging a child for their perceived future worth for our entertainment, and then questioning their character or coach, or fretting about their mental state when they don’t meet arbitrary benchmarks, I try celebrating and being inspired by their impressive efforts and accomplishments in the here and now. Tomorrow is never guaranteed. All I know is, Ethan Dang and his teammates are still setting NAGs and he’s swimming times I never even dreamed of at that age, or ever. He looks happy enough in that pic and I’ll bet he and his friends had a good celebration at McDonald’s or 31 Flavors or wherever, and that mom and dad are glad he’s having… Read more »

Peaking? Last time I checked he was still the 13-14 NAG record holder in 200mBR. He may not break those SCY NAG records, set by the 6’8” Reece Whitley, but is still THE fastest 12&U and one of the fastest 13-14 breaststrokers in the US history. I hope he uses these negative comments as extra motivations to break more records, and more importantly, the stereotype that Asian American boys peak early in swimming.

Shark Aquatics I’ve read some ridiculous posts on here over the years, but that one takes the cake. What leads you to believe that he is peaking? He broke Reece Whitley’s NAG a few months ago. Are you crazy? Probably just trolling

Alright Shark Aquatics I got somethings to say:
1) Ethan is a very motivated
2) He is only 14 and now has started to grow
3) He’s not even training on the top level of King
4) He hasn’t even started lifting weights yet
5) He’ll be training with Daniel Roy this summer, he’s faster long course anyways
Bud I don’t know who you are, but next time do your research. Show him some respect because I bet you wish you had some NAGs under your belt.