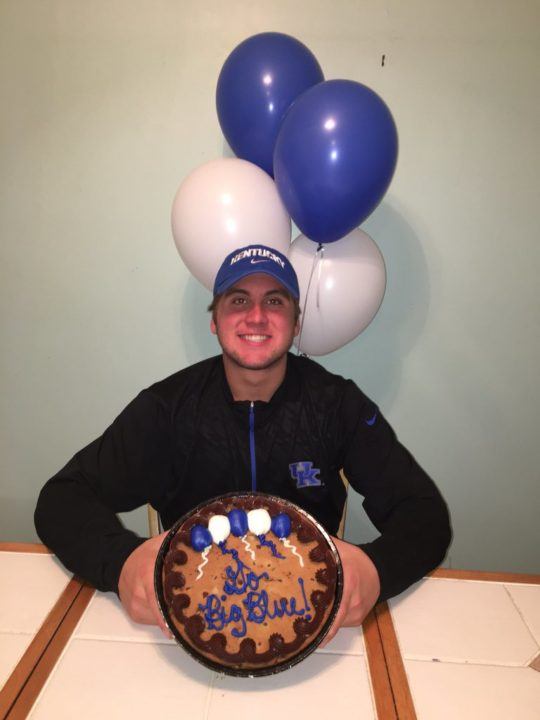 Kentucky senior All American Mason Wilby (above) won both the 100 and 200 fly to lead Kentucky over Miami (OH) on Saturday. Current photo via Mason Wilby

The University of Kentucky welcomed the Miami University men (OH) to Lancaster Aquatic Center in Lexington on Saturday for a dual meet. The Wildcats cruised to victory over the defending MAC champion Redhawks, 191 to 102, despite exhibitioning all of their entrants in the 400 IM and 200 free relay to end the meet. This was the second meet of the week for Kentucky, who had a big mid-week showdown with the Indiana Hoosiers.

Leading the way for the Wildcats was All-American Mason Wilby, who swept both butterfly races. In the 200 fly, Wilby’s signature race where he finished 13th at NCAA’s a season ago, the senior used a strong middle 100 to distance himself from the field and touched first in 1:48.80. He later returned to win the 100 fly as well, touching clear of the field in 49.71. Wilby also led off Kentucky’s winning 200 medley relay in 23.07 and finished second in the 200 back in 1:48.91. Joining Wilby on that winning medley relay was senior Kyle Barker, freshman Victor Martin Roig and sophomore Max Berg, who anchored in 19.91 to stop the clock in 1:30.45.

Sophomore Max Berg was also a double winner on the Wildcats, sweeping the 50 and 100 free. The Montpellier, France native dominated the 50 free in 20.45, winning by over three quarters of a second. He then returned to win the 100 free in 44.68. Berg seems to be starting to hitting his stride in his second meet of the season for Kentucky, after posting a 20.92 and a 45.52 leadoff split in UK’s dual with Indiana last Wednesday.

Two Kentucky freshmen also made noise in their home debut. Nicholas Caruso, a former club teammate of Wilby at Gator Swim Club in Gainesville, Florida, touched first in the 1000 free in 9:15.05. Caruso later returned to finish second in the 500 free with a 4:31.01. Fellow classmate Jackson Mussler also impressed, using a dominant back half to take the 200 back in 1:47.62. Mussler, an in-state recruit from the Lakeside Seahawks in Louisville, also finished fourth in 200 fly with a 1:51.36 and third in the 100 fly with a 51.41.

Miami was led by sophomore Henju Duvenhage, who claimed victory in the 400 IM with a 4:05.89 after the Kentucky exhibitions. Duvenhage, a South African native who won the 200 IM, 400 IM and 200 fly and last year’s MAC championships, also was Miami’s top finisher in the 200 fly, touching fifth in 1:52.47.

The Miami sprint group was also strong on the day, with seniors Ben Chatwin and Cole Grosshans posting a 2-3 finish in the 50. The two seniors also paired with junior Pedro Gueiros and sophomore Jack Herczeg to win the 200 free relay in 1:22.69. Last season Miami had the strongest sprint group in the MAC, placing those four swimmers in the A final of the 50 free and winning the 200 free relay by almost a full second over Southern Illinois.

Kentucky’s men now have two weeks to prepare before heading south to Auburn, AL for a huge two-day tri meet with Auburn and NC State on October 22-23. The Miami men now have nearly a month off from competition before heading to Oakland University in Michigan for a dual on November 13th.