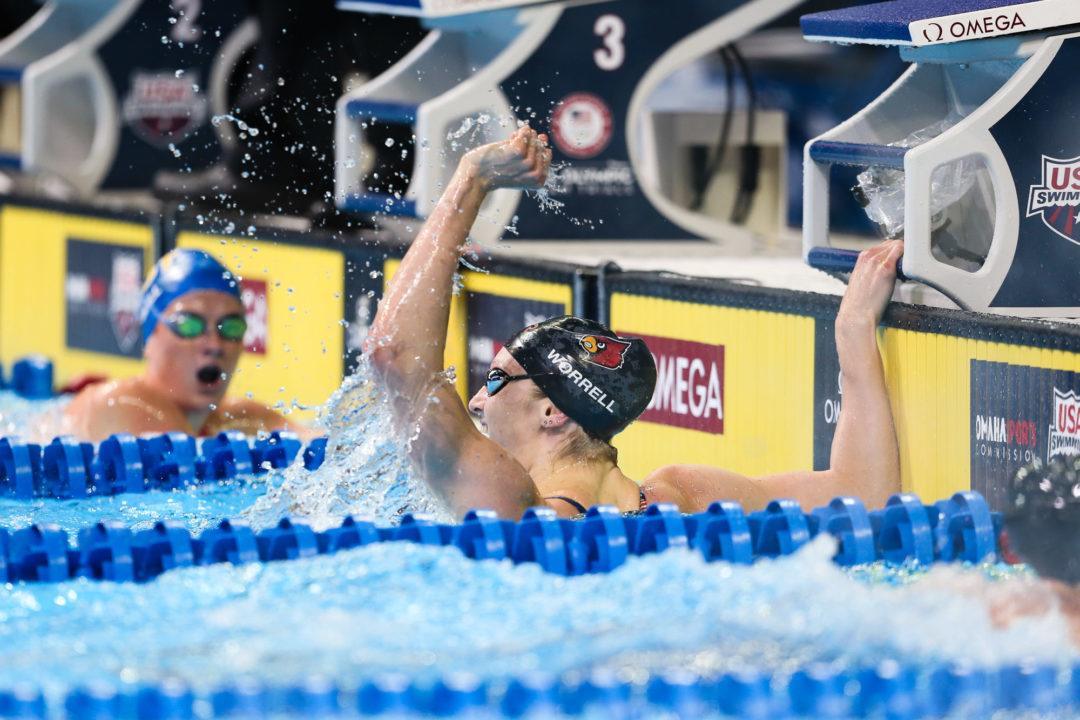 Kelsi Worrell dominated her heat in the prelims this morning posting a 56.84 to break her own personal record and vault herself to 2nd in the American all-time standings and 4th in the world this year. Current photo via Tim Binning/TheSwimPictures.com

Kelsi Worrell was out fast, 26.35, in the 100 fly prelims this morning. She dominated her heat, posting a 56.84 to break her own personal record and vault herself to 4th in the world this year.

China’s Xinyi Chen and Denmark’s Jeanette Ottesen sit right in front of her, at 56.82 and 56.83, respectively.

In terms of American swimming, she put herself 2nd all-time behind only Dana Vollmer, who holds the American record at 55.98 from when she won Olympic gold in 2012. Worrell was previously in third with her 57.24 which won the 2015 Pan Am Games title last summer. Her 56.84 shoots her past Christine Magnuson‘s 57.08 from the 2008 Beijing Olympics.

Worrell’s time qualifies her first for the semifinals, with Vollmer 2nd in 57.50 and 15-year-old Cassidy Bayer third in 58.91. For now, Worrell and Vollmer are out way ahead of any other Olympic hopeful in this event. The semifinals are set for tonight’s session.

The Louisville alumna won back-to-back NCAA titles in the 100y fly, and she is the American record holder in yards in this event.

Vollmer and Worrell will be 2nd and 3rd ranked after finals. Good medal opportunity for US.

Wow slow heat for al the others .I thought there were a few 58s (in season ) .

yeah, exactly, it only took 59.8 to make semis, exactly same as 2012. I was really surprised only 2 under 58 and 3 under 59, and even then just barely. tonight they will pick up the pace but even so, our depth not great for a country our size. Luckily the top 2 will be solid. I still think Vollmer is the clear favorite though it may be closer than I thought.