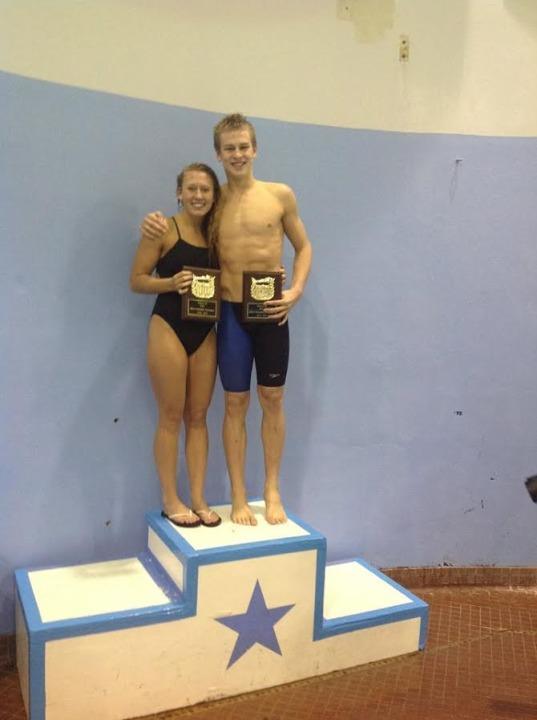 The ASAA Championships kicked off last weekend in Alaska and brought with it a downfall of eight Alaskan high school state records.

The competition kicked off with the 200 medley relay, and the race went to the eventual winners of the women’s category in a new high school state record of 1:46.75. They finished will ahead of Dimond High School who grabbed silver in 1:52.34.

In the men’s 200 medley relay it was KHS (Kodiak High School) who came out on top with a 1:37.28. The men’s race was much closer than the women’s as the DHS team came flying in for second less than a second behind them in 1:38.20.

Moving on to the first individual event of the meet it was Samantha Burke of CHS who grabbed gold in 1:53.54. Behind her was Erin Moody of DHS who touched in at 1:55.66 for silver.

The men’s 200 freestyle went to DHS swimmer Michael Summers who clocked in at 1:41.91 to claim gold. He finished well ahead of Jarod O’Brien who made it a 1-2 finish for DHS with his time of 1:44.89 to take home the silver medal.

The first individual Alaskan high school state record fell at the hands of Tahna Lindquist of KHS who recently gave her verbal to the University of Hawaii. Lindquist touched the wall in 2:03.61 to break the previous record and finish first ahead of Madeleine Oakley of DHS who grabbed silver way behind her in 2:12.82.

Her brother, Talon Lindquist, is only a freshman, but is following right in her footsteps and broke the men’s 200 IMhigh school state record. His time of 152.01 held off a charging Kenny Fox from TMHS who finished behind Lindquist in 1:54.85.

Following the 200 IM was the 50 freestyle. Ila Hughes of KHS won the women’s version of the event in a new high school state record time of 23.20. She separated herself decently from the rest of the field as second place competitor Emmie Jennings of CHS finished well behind in 23.65.

Abel Albach swam a 21.13 to win the men’s 50 freestyle and be one of only two swimmers under 22 seconds in the event. EZ Hogue-Corwin was the other swimmer under 22 seconds grabbing silver with a time of 21.37.

The divers came into action at this point and the women’s 1 meter event was all about Jami Stone of ERHS. The diver too gold with a grand total of 474.70 points to create a huge gap between her and her competitors. That point total was also a new high school state record for Stone.

The men’s 1 meter event was a whole lot closer as it featured three divers who were all in a very similar range. Brayden Schachle ended up winning with 464.95 points just slightly ahead of Austin Desatoff who grabbed silver with 461.95 points. Zach Cambell of LHS was just behind Desatoff to pickup the bronze with 461.75 points.

Heading back to swimming Cierra Kelly of JDHS earned herself a gold in the 100 fly with a time of 57.29. That time was good enough to take down Arianna Rhode of DHS who grabbed silver in 58.55.

Kenny Fox of TMHS who finished second in the 200 IM was able to come home with a win after placing first in the 100 fly final by a landslide, touching it at 50.33. His closest competitor was Blaise Fox-Icarro who touched in at 53.24 for silver.

Abel Albach who won the 50 freestyle also won the 100, this time breaking the high school state record with a time of 44.90.

Michael Summers who was successful in winning the 200 freestyle displayed his talents once more as he took control of the 500 and ended up winning the event with a time of 4:36.59.

KHS stepped up to bat in the relays shortly after winning both the men’s and women’s 200 freestyle relays. That left the KHS men undefeated in relays up to this point in the competition.

The 100 back followed the relays and Samantha Burke who won the 200 freestyle earlier in the meet came home with another win for CHS with a time of 57.38. Arianna Rhode who finished second in the 100 fly was well grabbed herself another silver with a 58.43 finish.

Joseph Anderson grabbed his first win of the meet in the final event with a time of 58.76 in the men’s 100 breaststroke. He was just able to hold off Tommy O’Donoghue who was just three one-hundredths behind him in 58.79.

The KHS women were able to win the final event of the meet with a time of 3:33.22 in the 400 freestyle relay. The KHS men on the other-hand were not able to complete the relay sweep as they finished third in the event with DHS winning it in 3:10.93.

Talon Lindquist is a freshman.