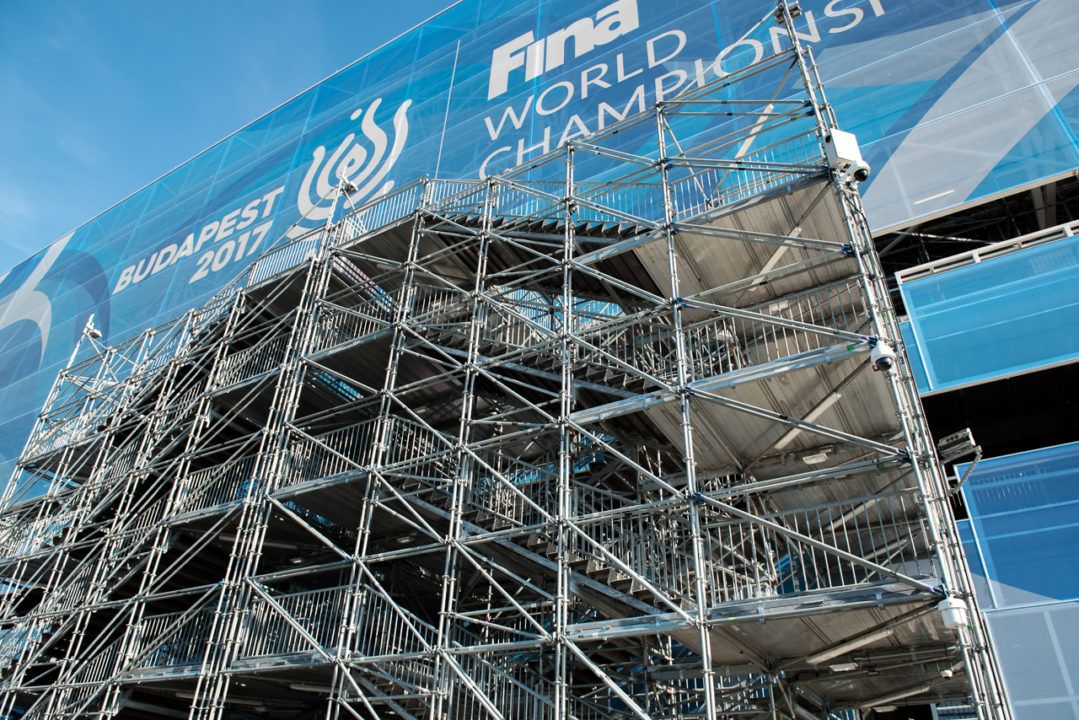 FINA, the world governing body for 6 aquatic disciplines including swimming, has re-elected Julio Maglione as the president of the federation.... Current photo via Peter Sukenik/www.petersukenik.com

FINA, the world governing body for 6 aquatic disciplines including swimming, has re-elected Julio Maglione as the president of the federation. He was elected over Italian Paolo Barelli, the president of the European federation, in the conclusion of what became a heated, controversial, and contentious election. The outcome of the vote was 258-77, heavily in favor of the Uruguayan Maglione.

The 81-year old Maglione had to alter the age limits to even run for re-election, but now will serve another 4 year term at the top of the organization.

While the general swimming population seemed prepared for a change, Maglione received overwhelming support from the federations – including public support from the Asian, African, and American federations that included at times accusations of bribery by Barelli. United States Aquatic Sports, the umbrella organization that represents the federations for the 6 aquatic sports in the United States, wrote a letter in support of Maglione that was signed by president Steve McFarland – who is also the chairman at Duraflex International, who is a major supplier to FINA of diving boards.

While ultimately the status quo remains in place, with Maglione continuing to run the governing body, the election exposed a seedier side of the sport, where conflicts of interest run amok and vice presidents can be elected from federations who do not support them – even after those same vice presidents are caught on audio recording asking for ‘commission’ in exchange for generating sponsorship deals for FINA.

These elections typical go down as a whimper, unheard of by the public, but this election has been the most public in memory.

Included among the elected is that the top 7 positions in the Executive are all men.

The leading federations such as the USA, Australia, Great Britain, Japan etc. should simply break away and form a new swimming body. It’s inconceivable that a non-entity such as Julio Maglione should be President of the world body. Before that we had a President from Algeria who served for decades. Most of the FINA Bureau consists of members from countries which have virtually no presence in elite swimming. It appears the sport we love has been captured by fat cats from third world or developing countries. The money that will be spent on travel, hotel bills and per diems for the FINA elite will dwarf the prizemoney that will go the people who make it all happen – the swimmers.… Read more »

At least he isnt doing anything on his countrys favor. I heard the uruguayan team that is now at worlds travelled 42 hrs to get to budapest, doesnt have a swimsuit sponsorship(use fina caps, need to beg to arena for a swimsuit that many times dont have enough sizes) or gets any special treatment. And poor uruguayans they dont have an olympic size pool or a decent one only 1 50 mts pool in the whole tiny country. So for sure money doesnt go to his country

I coached one of their better athletes for years and have 1st hand experience of the corruption in Uruguay swimming.

They did EVERYTHING they could to keep him from making the Olympics and yes, when they do travel the Officers not only siphon money for their own hotels at 5star units, but also take all the Uniform items for themselves and their family before the athletes get theirs.

My athlete went to many competitions with no tech suit and undersized uniforms if he even got any. I had to tap into MY connections with TYR etc to even get him a suit worth racing in. One year actually overnighting him a USED tech suit for his race, when these… Read more »

Btw you did not do a good enough job because several Uruguayan records are from 2007-9 so obviously some swimmers got theirs . The rest is just slander .

But so very much hatred for one tiny country on this thread . A nation of 320 million bullying a tiny country of 3 million ppl , a look at which shows them to be one of the more liberal Sth American countries eg same sex marriage , good per capita earnings & quite fair distribution of wealth ( Gini Index) . Why ? Because a Uruguayan won the FINA Presidency .

You guys can’t even control ( or accept) your own Presidential elections .

Haha . Electikns are the new entertainment .

What a horrible dsigrace!
The only reasonable reaction is to vomit!

How exactly did a guy from Uruguay become the head of the world swimming federation? Like, I really want someone to explain this to me.

Uruguay has never won a single medal of any color in any aquatics event. Ever. Not one of their swimmers has made semifinals in the past three world championships. Similarly, not a single swimmer from the country has made even semis at the past three Olympiads. And it’s not like they’ve been close either. 25th place would be a major step forward. Uruguay is beyond irrelevant.

Of course, it’s technically possible that he could be the best man for the job, even though not Uruguayan man has EVER swim fast enough to get… Read more »

The only American is Dale Neuberger? Neuberger needs to resign from FINA or quit as a TSE employee (FINA lobbyist). And that suspicious Kuwaiti is still there? This is a strange organization, but at least now, everyone knows it.

Neuberger is that guy hoping to never see discovery in a due process.

Tell me again why we don’t need an athlete and coaches union? What do we do when he changes the age limits aging in 4 more years?