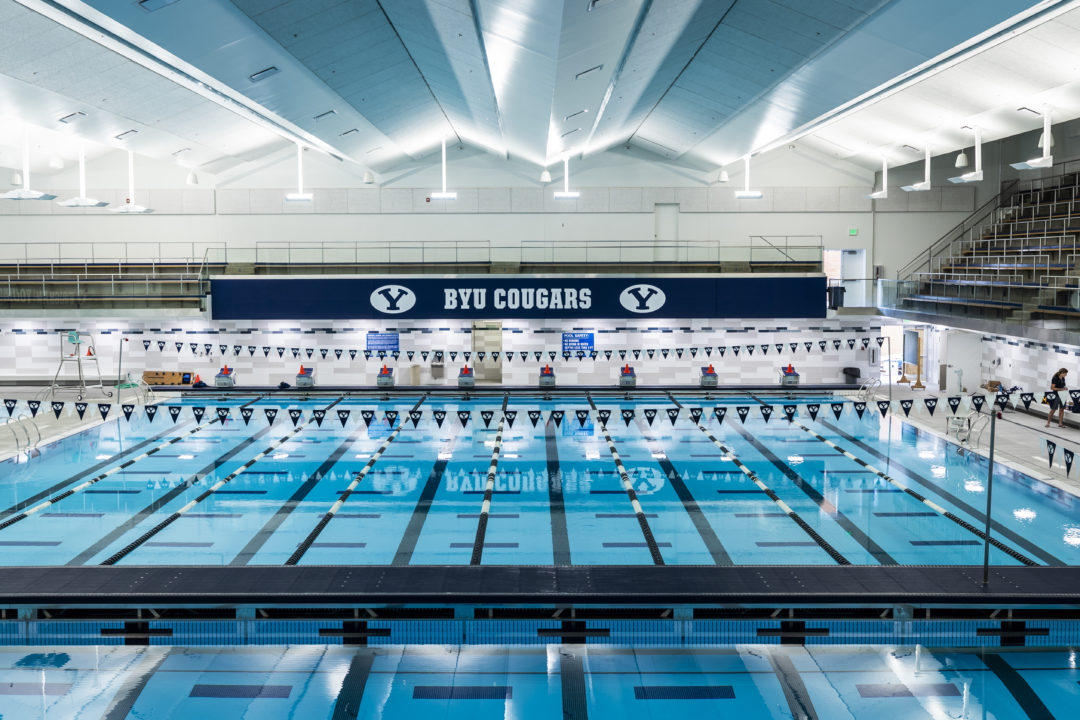 BYU junior Josue Dominguez came within four-tenths of his lifetime-best with a 53.07 in the 100 breast at a time trial between BYU and Utah. Archive photo via Nate Edwards/BYU

Dominguez hit his lifetime-best of 52.69 last March, just missing the NCAA invite time by two-tenths of a second. His 53.07 this week is his fastest in-season time ever. Dominguez has been sub-53 on three occasions in his career, but all have come either at the American Short Course Championships at the end of the college season, or at the Mizzou Invite, typically a mid-season rest meet for many programs.

Going 53.07 this week bodes well for Dominguez’s hopes of making the NCAA Championships in his junior season.

Perhaps the highlight on the women’s side was a trio of sprint free battles between Utah’s Madeline Woznick and BYU’s Gwen Gustafson. The sophomore Woznick touched out Gustafson to win the 50 free 23.20 to 23.61, and also won the 100 free in 50.14.

At the end of the meet, both returned to reprise their 50 free showdown as part of their team’s 200 free relays. Woznick led off Utah’s relay in 23.11, building a huge lead. But Gustafson anchored the BYU team in 22.98 and the Cougars won the race in 1:34.65.

Woznick’s big swims, though, are a great sign for the remainder of the season. She was just .07 off of her career-best in the 50 free, nearly surpassing her speed from last year’s Pac-12 Championships. Her 100 free was a lifetime-best, taking two-tenths off the time she went at Pac-12s last year.

Other notable swims from the time trial meet: