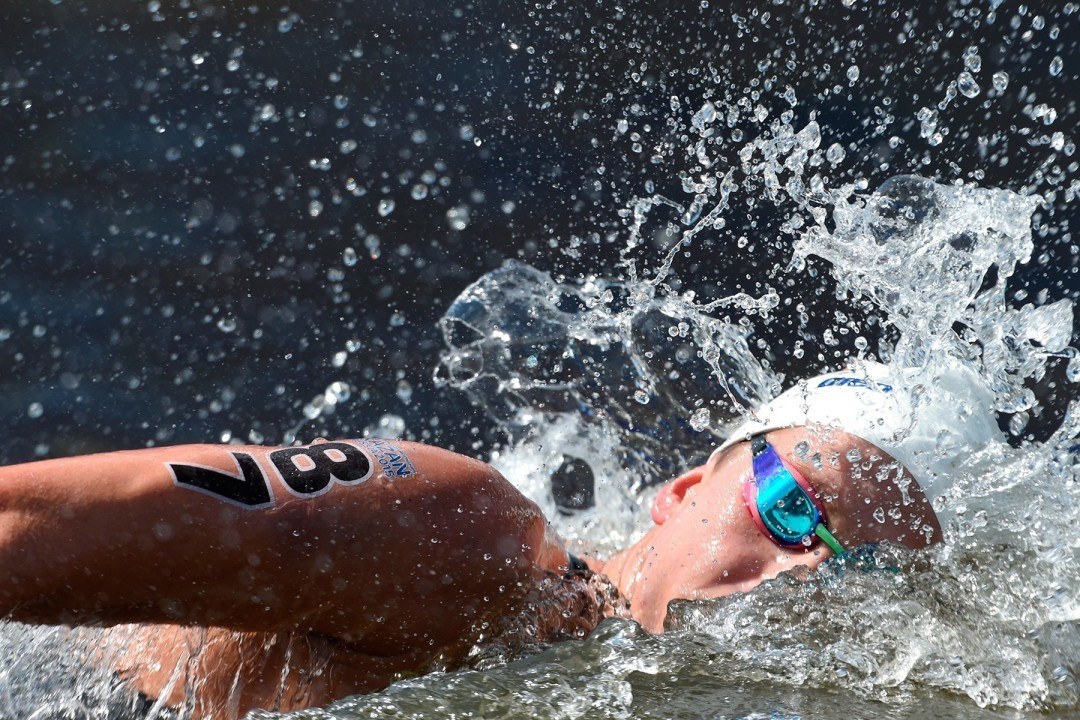 Just as Ashley Twichell did on the women’s side, Jordan Wilimovsky successfully defended his Open Water National title today in the men’s 10K, putting up a time of 1:47:14.718.

“It was a fun race”, said Wilimovsky. “This was the first time we swam at this course, so I was trying to get used to the course lines and just tried to stay relaxed the first half of the race, then build into the second half and make sure I had enough in the legs for the last thousand.”

Wilimovsky and runner-up David Heron (1:47:27.713) join Twichell and women’s 2nd place finisher Haley Anderson on the U.S. Pan Pac roster. Heron won the national 5K last year, but was only 11th in the 10K. Two additional spots will be available for both men and women on the Pan Pac roster May 31st at French Nationals.

Midway through the race a lead pack formed as Taylor Abbott and Heron charged to the lead, with Michael Brinegar sitting in 3rd. However, towards the end of lap five (out of six), Wilimovsky took over and ultimately pulled away for the win. The battle for 2nd and the last spot on the Pan Pac team turned into an all-out sprint coming down the stretch, as Heron and Abbott required a photo finish to determine who was the runner-up. Heron ultimately got the edge by just six one-hundredths of a second.

On his close finish with Brinegar, Herron said: “I expected it to come down pretty closely. I did pick it up halfway through the race to try to spread out the group. When Jordan was leading I was hoping we’d spread it out even more, which we did, but Brinegar stayed with us and he was a lot faster at the finish than I was expecting … I’m usually pretty good at finishes. I’ve been practicing that a lot at Tennessee, so it worked out.”

Note: Full results will be updated once available.

The Virginia boy, Casey, I believe was the only one of this crew who competed in Minnesota. Check me if I’m wrong.

Another year, another terrible livestream production by USA Swimming

I went last year to go watch. I’m 100% certain it is better on less than stellar livestream than what you can see from the beach… I shoulda brought binoculars.

This year was much better for spectators. If you could walk fast enough to keep up with the swimmers you could be about 20’ from them for about most of one side of the loop. The far side was also much closer than past few years.