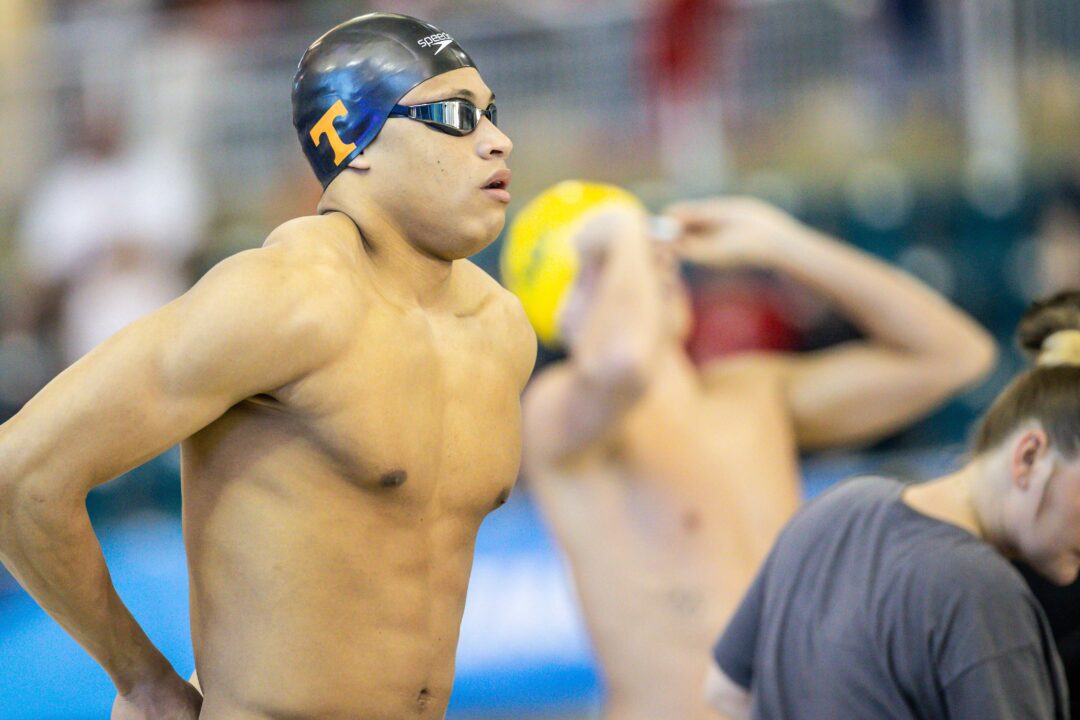 Crooks clocked a 18.68, shaving more than half a second off his season best from last month to sneak under the NCAA ‘A’ cut of 18.88 and automatically qualify for the NCAA Championships in March. The 20-year-old from the Cayman Islands was out in 8.96 and back in 9.72, reaching the wall just .02 seconds behind the fastest midseason time ever tallied by Caeleb Dressel in 2017. Crooks was also just .15 seconds shy of his personal best from the 2022 SEC Championships.

At this time last year, Crooks had just clocked the first sub-20 swim of his career with a 19.39 at the 2021 Tennessee Invitational. He ended up throwing down a blistering 18.53 at SECs earlier this year in February to become the fastest freshman in NCAA history and the fifth-fastest swimmer of all time.

No swimmers had broken the 19-second barrier entering this week, but three have now achieved the feat within the past day. Reigning NCAA champion Brooks Curry went 18.94 at the Art Adamson Invite on Wednesday night, and Florida newcomer Josh Liendo upped the ante with a 18.68 during prelims at the Georgia Invite on Thursday morning.

Crooks might not be the only Tennessee swimmer in the sub-19 club for long. Freshman teammate Gui Caribe is knocking on the door after roaring to a personal-best 19.05 during Thursday’s prelims.

Last month, we asked SwimSwam readers how many sub-19 swimmers we would see before 2023 begins, and 60% of respondents got it right by answering “at least three.” For the past seven seasons, only one swimmer had cracked 19 seconds in the first half of the season. Texas’ Cameron Auchinachie, a fifth-year senior last season, dropped an 18.80 at the Minnesota Invite last December, while Bjorn Seeliger (19.06) and eventual NCAA champ Brooks Curry (19.09) saved their best for the postseason.

The fastest mid-season swim ever came courtesy of Dressel, who blazed an 18.66 at the 2017 Purdue Invite in the lead-up to his pair of sub-18 swims at the NCAA Championships later that season.

I didn’t realize we now have mid season records

I didn’t realize we had unsuited dual meet records for women in the 100 fly, yet we’re here

Have you seen the stats football and basketball keep?

I have and they get made fun of it for it. Tim Kurjian always has a great stat that fits into this category.

Most will be excited that someone went 18.2. Crooks will probably drop even more time at SECs or NCAAs but swimmers swim much faster in season than they used to 10-20 years ago.

Going really fast in season doesn’t mean quite what it used to because everyone suits up mid year and gets a little rest (if not more). I get as excited for fast swimming as anyone but I also understand that years ago swimmers would drop a lot more from their mid season meets to the end of the year.

Doesn’t he only work with the women?

Rich and Josh are getting the men’s team culture back to form.

Might see another member of the sub- 18.47 club tonight boys

This is shaping up to be the Year of the 50 Free on both the men’s and women’s side.
With the Minnesota Invite still to come. Mercy.

Gotta wonder how much taper he has/if he shaved etc…

i heard they were still getting after it on wednesday