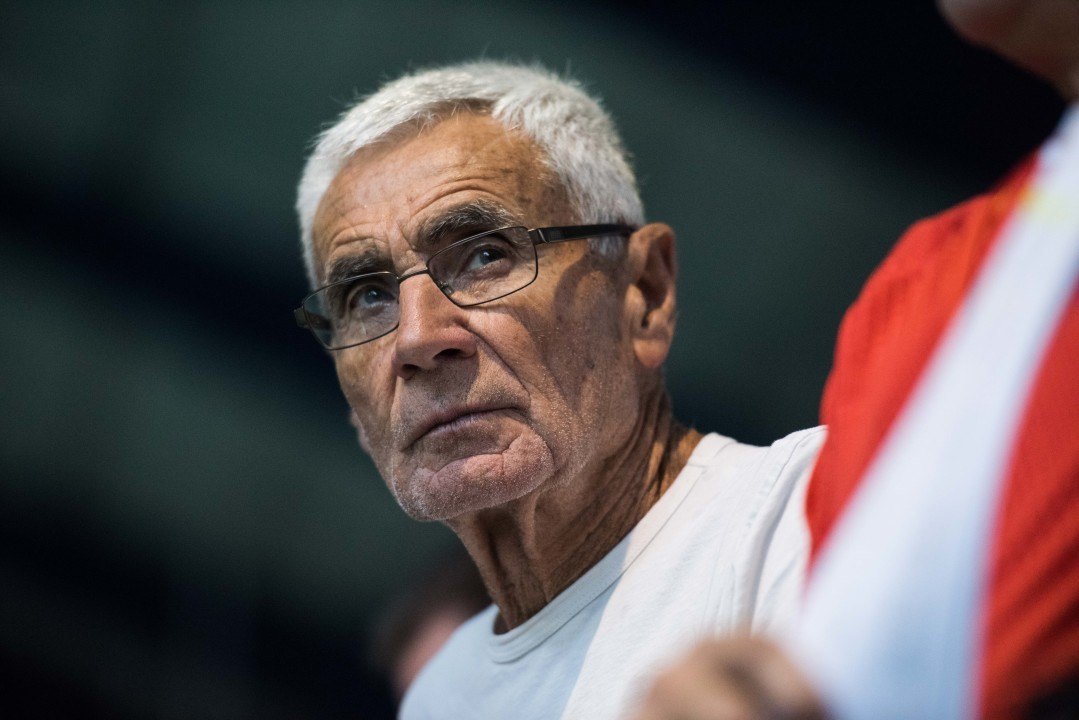 Legendary coach Jon Urbanchek retired on August 31 from both his role as a USA Swimming National Team Technical Advisor, and as a swim coach. Current photo via Mike Lewis/Ola Vista Photography

USA Swimming is holding a virtual version of its annual convention this weekend due to COVID-19 limitations. At tonight’s session, five awards were given to six long-standing members of USA Swimming who were recognized for their exceptional service and commitment to the sport.

Legendary swim coach Jon Urbanchek was honored as the 2020 recipient of the USA Swimming Award, which the organization considers to be one of its highest honors.

Urbanchek has served on the coaching staff of six Olympic teams, spanning from 1992-2012 and has coached at least one swimmer to each Games since 1972.

Among those that he has coached to elite status are Mike Barrowman, Tom Dolan, Tom Malchow, Eric Namesnik, Eric Wunderlich, Gustavo Borges, and Brent Lang. During his career, he also coached the Michigan men’s swim team to the Big Ten title 13 times from 1983-2004. Urbanchek was the first-ever recipient of the IOC Coaches Lifetime Achievement Award in 2017 and has been inducted into the International Swimming Hall of Fame.

Following a storied career, Urbanchek retired from both coaching and his role as the USA Swimming National Team Technical Director on August 31.

Of Urbanchek, US National Team Managing Director Lindsay Mintenko said “Coach Urbanchek is a legend of our sport, admired by athletes and coaches alike. We have all learned at least a little something from him, and his retirement will be felt for a long time to come.”

Along with the USA Swimming Award, four more awards were given out at Friday’s ceremony.

The Women in Swimming Award is a new honor given for the first time in 2020, and it was given to two recipients: Catherine Kase and Nadine Day.

Past President of United States Masters Swimming (USMS), Nadine Day has been involved with USA Swimming for decades, qualifying for her first Junior Nationals at age 12 back in 1983 and was represented on the US National team in both 1985 and 1987.

She swam began swimming for Northwestern University in 1988 and retired from the sport in 1992. She made her return in 2001 when she began swimming with the USMS and has been involved ever since.

Beginning as Safety Education Committee Member in 2004, she has filled several roles throughout the years, including Swimming Saves Lives Foundation Member, Comp and Benefits Committee Chair, and Governance Committee Ex-Officio. Some of her past recognitions for her involvement in USMS include the U.S. Masters Swimming Dorothy Donnelly Service Award (2007), Ted Haartz U.S. Masters Swimming Staff Appreciation Award (2016), and the Capt. Ransom J. Arthur M.D. Award (2017).

Kase coached at USC from 2008 to 2020 and served as associate head coach for her final three seasons. In addition to her collegiate coaching career, she was the head coach of the US Olympic Open Water Team at the Rio Olympic Games and has earned the same position for the 2020 Tokyo Olympic Games, in part due to her work with 2012 Olympic silver medalist Haley Anderson.

The 2020 Adolph Kiefer Safety Commendation Award went to long time USA Swimming member, George Ward. Ward served as Senior Director of Risk Management for USA Swimming from 2013 until 2020. In the position, he was responsible for “a comprehensive and effective risk management program for USA Swimming, liaison with insurance brokers and claim managers, and support the organization’s Safe Sport and Sports Medicine programs.” The award is presented by the Safety Education Committee to “an individual or organization that has made a significant contribution to safe swimming in the United States.” The name of the award honors legendary American Olympian Adolph Kiefer who won a gold medal at the Berlin Games back in 1936 and was the first man to break the one-minute mark in the 100-yard backstroke, swimming a 59.8 in 1935 when he was 16.

Marvin A. Thorpe II was awarded the USA Swimming 2020 Diversity, Equity & Inclusion Award, recognizing a “person or group who has positively heightened the awareness of inclusion efforts through various modes and media resulting in the increase and successful participation of currently underrepresented groups in the sport.”

Thorpe runs the 4M Swim Club which has been in operation since 1972 and was started by Thorpe’s father Marvin Thorpe. Of Marvin, his nominator, Sandy Avery, said “Coach Marvin is an inspiration for all of us who are fighting what the World Health Organization labeled an ‘epidemic of drowning among the most vulnerable children — children of color, socioeconomically disadvantaged children, and differently-abled children — and he has been doing it for over 40 years.”

The USA Swimming Pettigrew Award is given annually to “honor Kenneth J. Pettigrew, who devoted over 30 years to the sport of swimming. Each year the recipient is chosen by the USA Swimming Officials Committee.”

The 2020 recipient of the award Jayne Spittler has been an active member of USA Swimming since the early 2000s, recently serving on the United States Aquatics Sports conference task force to help plan their 2022 conference as an athlete representation.

Spittler’s previous recognitions for her service include the Illinois Swimming Volunteer of the Year, the Maxwell Award winner for exceptional officials, and the USA Swimming Phillips 66 Service Award winner.

The 2020 USA Swimming Convention will come to a close on Saturday, with the voting session of the House of Delegates beginning at 10 AM (ET).