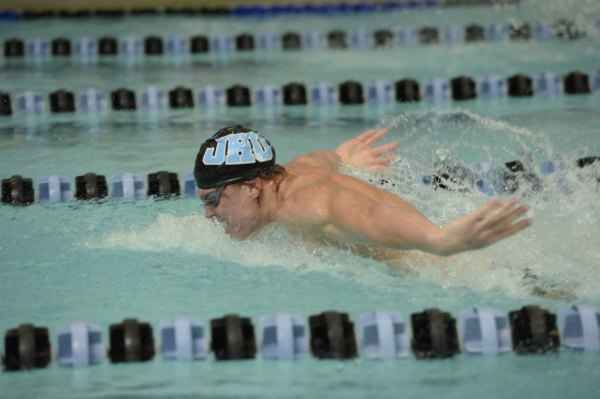 From Friday to Saturday, the Johns Hopkins Jays were on the attack, taking down St. Mary’s and then Stevens. JHU... Current photo via Johns Hopkins Athletics

From Friday to Saturday, the Johns Hopkins Jays were on the attack, taking down St. Mary’s and then Stevens.

In the Friday meet against St. Mary’s, the Jays’ women won 119-63 to maintain their winning season and freshman Anna Wisniewski took down a 10-year-old pool record in the 200 IM. On the men’s side, JHU took down a pair of pool records on their way to a 117-76 victory. Sophomores Andrew Greenhalgh and Evan Holder each reset the record books. Greenhalgh broke his own pool record – set a bare two months ago – by more than three seconds. Holder went to the other end of the spectrum, breaking a 34-year-old pool record set in the 200 IM.

On both sides, the Jays were completely dominant. From the start, the men and women swept the top three spots in the 200 medley relay and didn’t look back.

The Jays took 1-3 in several events including the women’s 200 IM. Wisniewski led the pack with a 2:06.84, and was followed by freshmen teammates Gwyneth Lamastra (2:11.53) and Kaitlin Jones (2:11.75). Wisniewski is currently the fastest 200 IMer in DIII for the women, with a 2:03.57 set in December; however this dual meet time would land her just outside the top 8 in DIII by itself, which is a great indication of good things to come.

Holder swam his 200 IM in a 1:51.98 to take down the pool record. He was by far and away ahead of his competition, being over ten seconds ahead of runner up teammate William Gravley (2:02.60). Like Wisniewski, Holder owns one of the top times in the nation for DIII (currently ranked second in the 200 IM at 1:47.69), and the race he swam is impressive for being a top 16 showing (it lands exactly between 11th and 12th so far for this year). What’s more exciting, though, is the possibilities of what the future may Hold-er.

After the backstroke, the Jays finished out the meet exhibition, leaving Saint Mary’s to claim victory in the 500 freestyles, 100 breaststrokes and 200 freestyle relays.

For complete meet results from the meet against St. Mary’s, click here.

The day after facing St Mary’s, the Jays were at it again with a battle against the Stevens Ducks. Once again, the women remain undefeated, topping Stevens 191-71 en route to victory. The men’s team picked up another victory as well (169-93), with yet another record set by Andrew Greenhalgh, and three victories from freshman Kyle Otazu.

Hopkins began the day with victories in the 200 medley relays. On the women’s side, they went 1-2, with Anastasia Bogdanovski anchoring the winning relay in 23.95.

Junior Elizabeth Heinbach claimed one of two victories for the Ducks’ women, taking the lead in the 1000 freestyle and posting an 11:02.16 for the win. Greenhalgh did his thing in the men’s 1000, leveling the field with a 9:20.84 (yet another JHU school record), breaking the pool record by over 17 seconds, and skipping to the first place position on a DIII listing of top times in the 1000 by nearly five seconds. That’s impressive, considering the next fastest athlete (Williams’ Christian Gronbeck) is also more than seven seconds ahead of the third fastest athlete on that list.

Now, you can’t qualify for the NCAA meet with an awesome 1000, but you sure can get a distance geek’s hopes up for the best distance race in DIII this March in Texas.

Bogdanovski. While a 1:53.88 isn’t exactly a new school record (not when she has the fastest time in DIII this year at 1:47.31), it’s also nothing to sneeze at in a dual meet. And being five seconds ahead of the competition in a 200 free is pretty darn impressive as well.

Stevens’ men put three victories on the board Saturday, with the first coming from Ravi Sun in the 100 backstroke. Sun posted a 52.41 as he back-halved his way to victory, finishing almost half a second ahead of the runner up.

Holder took the men’s 100 breaststroke by over two seconds with a 57.68. That’s a little ways outside a top 16 time in DIII right now, but currently Holder’s best is a 55.50 which ranks him 4th across the division.

Stevens’ second win for the men came from junior Tomasz Wolinski who posted the fastest time going away in the 50 freestyle, with a 21.68, almost half a second ahead of the runner up. Stevens’ final victory for the men came in the 200 backstroke, where Sun returned to claim the win with a 1:53.89, his final 50 more than a second faster than his competition. Sun currently has the 7th fastest 100 backstroke (49.63) and second fastest 200 backstroke (1:47.19) in the division.

To close out the meet, the JHU women stole away the 400 freestyle relay with a 3:37.46 – more than six seconds ahead of Stevens’ A relay. The JHU men had a much closer race, finishing a second ahead to claim the win.

For complete meet results from the meet against Stevens, click here.

The Jays will be back in the water on January 24th at Towson University to take on the Tigers. Stevens resumes competition January 31st at Hartwick.