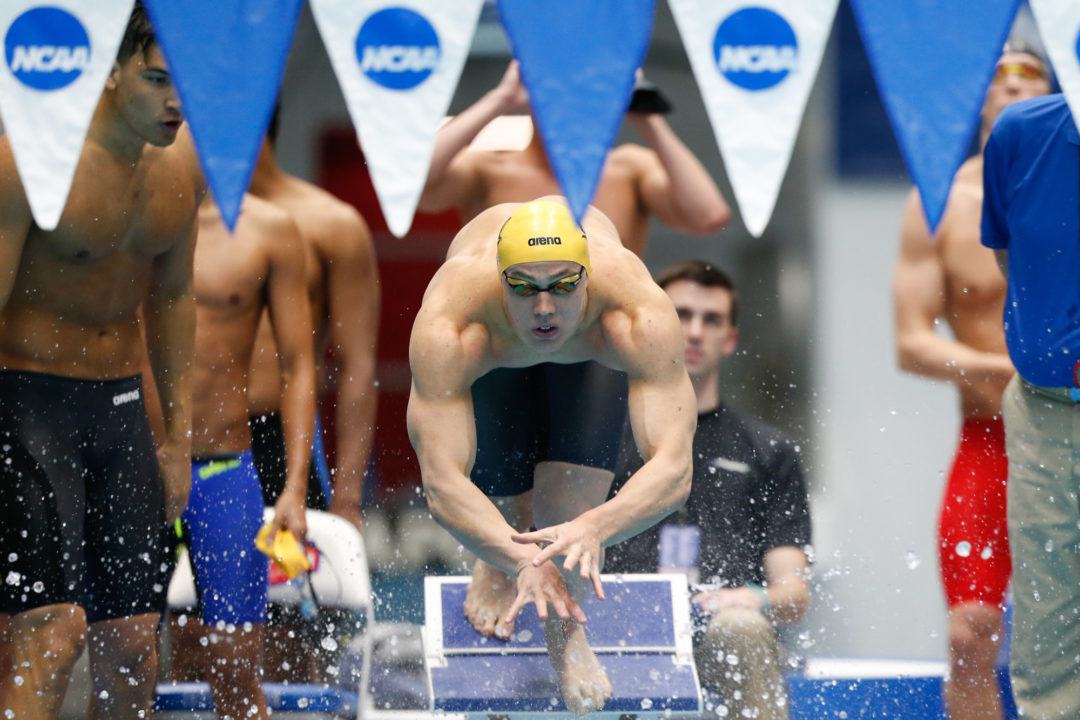 The most impressive relay split of the day came from Cal's Michael Jensen, who put up a 19.08 on the 2nd leg of the 200 free relay. Archive photo via Tim Binning/TheSwimPictures.com

Isabel Ivey is leading a 1-2-3-4 Cal charge in the 100 free final, putting Cal in a position to potentially outscore four-time defending champions, Stanford

Isabelle Stadden will challenge the 1:50 barrier in the 200 back today, while the Cal Bears hold the top four seeds in the 100 free.

Senior breaststroker Connor Hoppe picked up a sweep for the Golden Bears as the Cal men and women took down Arizona while celebrating senior day. Hoppe was dominant in the 100 breast, winning by over a second and a half in 54.51. He battled closely with Arizona freshman Sam Iida in the 200 breast. Hoppe used his front-half speed to take the edge, but Iida bounced back to take the lead by a hundredth after the 3rd 50. Hoppe managed to outsplit Iida by a tenth down the final stretch, taking the win by a fingernail in 2:01.83 to Iida’s 2:01.93. Hoppe also contributed a 24.23 breast split on the winning 200 medley relay.

Freshman standouts Sean Grieshop and Ryan Hoffer each turned in a win for the Bears. Grieshop’s win came in the 1000 free, where he held off a late charge from Arizona freshman Brooks Fail (9:06.46) to win it in 9:05.64. Hoffer was neck-and-neck with All-American teammate Pawel Sendyk in the 100 free as they tied for the win in 44.53. Hoffer put up a 19.23 free split to anchor the 200 medley relay squad to victory and threw down a 19.63 on the 200 free relay. Sendyk contributed to both winning relays as well with a 21.30 fly split on the medley relay and a 19.53 on the 3rd leg of the free relay.

All-American sprinter Abbey Weitzeil picked up a sweep of her specialty sprint events for the Cal women, while freshman teammate Ali Harrison turned in a sweep in the women’s breaststrokes. In the 50 free, Weitzeil turned in a 22.29, with Arizona All-American Katrina Konopka following in 22.98. Weitzeil returned for the 100 free and was the only swimmer to break 50 seconds with her 48.98. She also played a role on the relays, putting up a 27.87 breast split on the 200 medley relay ‘B’ squad and a 21.70 anchor leg on the winning 200 free relay. Harrison put up a 28.61 breast split on the ‘A’ 200 medley relay and joined Weitzeil in the 200 free relay with a 23.25 split on the 3rd leg. Individually, she posted winning times of 1:01.90 in the 100 breast and 2:15.99 in the 200 breast.

Fellow Cal standout Katie McLaughlin joined them with multiple individual wins. She had a very close race with Arizona’s Kirsten Jacobsen in the 500 free, as the race came down to the touch. Jacobsen had the lead through the 300 by a couple of tenths, but McLaughlin took a slight edge at the 350-yard mark. Jacobsen battled back down the final stretch, but came up just .01 short as McLaughlin touched a hundredth ahead, 4:49.80 to 4:49.81. McLaughlin also dominated the 200 fly in 1:57.90. She was a member of both winning relays, posting a 22.24 anchor split on the medley relay and a 22.34 2nd leg split in the free relay.

BERKELEY – With a group of eight seniors swimming their final races at Spieker Aquatics Complex, the Cal men’s swimming and diving team made sure to send its upperclassmen off on the right note as the Bears produced their second win in as many days with a 165-123 victory over Arizona.

Before jumping in to race, Cal honored a group that has been strong both in the water and in the classroom as Kyle Coan, Connor Hoppe, Matthew Josa, Ryan Kao, Justin Lynch, Nick Silverthorn, Zach Stevens and Matt Whittle were recognized for their contributions to the program.

And, once the senior festivities concluded, those same upperclassmen did their part to help Cal finish a sweep of the Arizona schools. Hoppe teamed with Daniel Carr, Pawel Sendyk and Ryan Hoffer to kick off the day with a win in the 200-yard medley relay as the quartet swam to a time of 1:27.29.

Sean Grieshop provided a look to the future in the 1,000 free as the freshman stopped the clock in a season-best 9:05.64 to add another win to Cal’s total. Not long after that result, a battle between Golden Bears broke out in the 200 free as junior Mike Thomas staved off challenges from Kao and Coan to win the 200 free in 1:36.39.

Freshman Bryce Mefford kept the momentum going, just beating teammate Andrew Seliskar to the wall to win the 100 backstroke in 48.74. Seniors again took center stage in the 100 breast as this time Hoppe touched in 54.51 to pick up a win and Whittle took second in 56.15.

Zheng Wen Quah earned Cal’s top result in the 200 butterfly with a second-place finish and Cal swimmers went 1-2 in the 50 free as Michael Jensen clocked a time of 19.47 to just beat Lynch to the wall. The Bears continued that dominance in the sprints after the first break of the day when Sendyk and Hoffer combined to tie for the win in the 100 free, each recording a time of 44.51 to get the victory.

Quah earned a spot in the winner’s circle with a time of 1:44.58 in the 200 back and Hoppe highlighted a senior-laden effort in the 200 breast with a winning time of 2:01.83. Silverthorn and Stevens each turned in strong performances in the race as well, finishing third and fourth, respectively. Josa won a Golden Bear duel in the 100 fly, racing to a time of 46.53 in the 100 fly and beating Lynch by just four-hundredths of a second.

“It was awesome to see them race,” Cal head coach David Durden said of his seniors. “That 200 breaststroke race was really cool. To see Connor and Zach and Silver in there, those guys have trained together for four years and raced with each other for four years so to see that was really fun to watch. Lynch and Josa in the fly was great to see. To get to celebrate that with those guys through the last four years has been really neat to see.”

Added Silverthorn: “It seemed like not too long ago I was a senior in high school watching my future teammates compete at the Cal-Arizona meet for their Senior Day. Now I’m competing in it myself, so it’s been weird.”

Saturday’s meet brought the home dual meet season to a close but plenty of racing remains for the Bears. Cal heads to Los Angeles for a dual meet at USC on Feb. 2, then returns to the Bay Area to close out the dual meet season on Feb. 17 at Stanford.

BERKELEY – In the final home meet for four Golden Bear seniors, Cal came through with a near perfect afternoon, winning all 16 events en route to a 195-96 victory over Arizona Saturday at Spieker Aquatics Center.

Senior Noemie Thomas was one of nine Bears to take first place in at least one individual event, prevailing in the 100-yard butterfly in 52.28, a nearly third-of-a-second improvement from Friday’s meet vs. Arizona State. She currently ranks third nationally in the 100 fly. Thomas also played a role by swimming the butterfly leg in the Bears’ opening victory in the 200 medley relay.

“Top to bottom, we did a much better job today and were much more solid across the board,” head coach Teri McKeever said. “I think acknowledging and celebrating the seniors brought out the best in everybody. We had a lot of great performances to build on and I can see us getting our racing confidence back.”

Overall, four swimmers and one diver were double-winners on the afternoon. Junior Amy Bilquist claimed the 100 and 200 backstroke, sophomore Abbey Weitzeil won the 50 and 100 free, freshman Ali Harrison prevailed in the 100 and 200 breaststroke, freshman Briana Thaitook first on the 1-meter and 3-meter springboards, and junior Katie McLaughlin won the 200 fly and 500 free.

Cal closed out the day by winning the 200 free relay in 1:30.94, while taking fifth in the race was an all-senior squad composed of Jasmine Mau, Thomas, Valerie Hull and Maija Roses.

The Bears return to action Jan. 26-27 when they travel to Los Angeles to face USC and UCLA.

BERKELEY, Calif. – Wildcats drop their second-straight meet to top-5 California Bears. The final for the men was 123-165 and the women was 96-195. Justin Wright finished first in his second-straight 200 fly race, and freshman Brooks Fail notched a win in the 500 free.

The Wildcats open up the meet with two third-place finishes by the 200 medley relays. Chatham Dobbs, Matthew Salerno, Riccardo Maestri, and Parks Jones clocked in at 1:29.67. The women’s team, consisting of Daniela Georges, Mallory Korenwinder, Mackenzie Rumrill, and Katrina Konopka, got a 1:41.82 time.

Iida finished second and Korenwinder placed third in the 200 breast for the Wildcats with 2:01.93 and 2:18.73, respectively.

Up Next: Arizona is set to host the Texas Longhorns on Friday, January 27.

After the 19.0 split – who would you put in the freestyle leg of the medley relay? Jensen or Hoffer?

agree, best time in season pre-taper, jensen. No one can say he has less talent. or can they?

We’ll know after we see splits from the 200 Free relay and the 50 free the day before. Pac 12 we wont have the foresight. My money says Jensen goes on the 8 free relay instead of 2 medley. 400 Medley will be dicier but both will be close enough that it won’t matter.

I mean Hoffer was 19.2 earlier in the day in the medley relay, shows the two are at about the same place

The guy who swam an 18 as a high schooler

Wait, where was Kathleen Baker?

Maybe they didn’t need her and kept her in the weight room getting big!

With Sendyk, Hoffer, Jenson, and Lynch Cal could potentially have 4 guys go under 19 in the 50 free from a flat start this year. Reminds me of the glory days at Auburn

Between these guys, Texas, and NC state, this might be the race of the meet. 400 Free relay will be crazy too. Florida might be in the mix in the longer one as well.