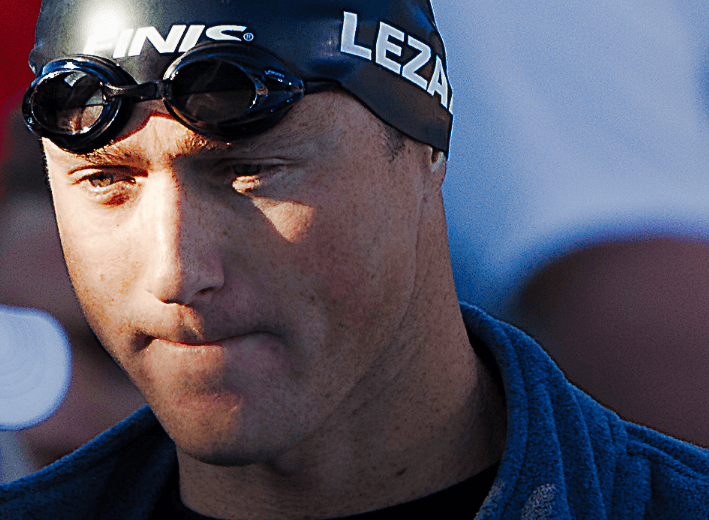 Chuck Warner, the author and coach, is an old friend. Thoughtful and passionate about the sport, he has studied the...

Katie Ledecky and Leon Marchand earned FINA Swimmer of the Meet honors based on a scoring system that awards points for top-four finishes.

Do you ever get tired of trying and coming up short of your goal? You’re just not getting where you want to be and you’ve tried and tried again? For many people the capacity to push through obstacles to get where they want to go demonstrates a strength of character trait groomed and implanted in their early childhood. Changing one’s character later in life happens, but it’s usually difficult.

The result of the 2008 Olympics in the Men’s 4 x 100-meter Freestyle Relay is a prolific example of the impact of character change in at least one adult.

With seventy-five meters remaining in the relay race, France’s Alain Bernard was pulling away from the USA’s Jason Lezak who lagged a body length behind him.  Bernard had set, and reset, the world record in the 100 freestyle three times over the previous six months. The eight-gold medal dream for Michael Phelps seemed dead, and with it his $1,000,000 bonus from a sponsor, Speedo swimwear.

Even Jason Lezak admitted later, “The thought really entered my mind for a split second. There’s no way [to win].”

America had once boasted winning this relay at every Olympics. When the event was added to the swimming program at the 1964 Games, America won going away with the great Don Schollander anchoring the foursome. The results were the same in 68, 72, 76, (80 boycott), 84, 88, 92, and 1996. But in 2000, with Jason Lezak at his first Olympics, and on the relay, the USA lost for the first time in Olympic history at the hands of Ian Thorpe and the Australians, all in front of a raucous home crowd, by .21 seconds

In 2004, the Americans, and Jason Lezak, finished third behind South Africa and the Netherlands. Now in 2008, trailing badly it seemed the Americans would lose again. Even in what appeared to be obvious futility; did Jason Lezak have the will to give a second or third effort on the anchor leg of this race?

Lezak being in this position was improbable. He was a good, but not a great age-group or high school swimmer. He wasn’t highly recruited at the major NCAA swimming powers. He received a small scholarship to attend UC Santa Barbara (UCSB) for his undergraduate education and swam for the ever-patient coach Greg Wilson.

After two years at UCSB, Coach Wilson had grown weary of Jason’s lack of effort. One example was a sprint set of 6 x 100s on 8 minutes that one would expect him to thrive on. Jason swam decently on number one, average on number two and he was awful on number three.  “I tried my hardest,” he told Coach Wilson after the girls starting beating him on the third one. Making matters even worse he exhibited a “me first attitude” and lack of consideration for the team. Greg Wilson didn’t give up on a swimmer easily. He knew all about the value of third effort and persisted in trying to motivate his talented sprinter. He tried heart to heart talks, tried taking him to lunch and he tried yelling at Jason. But his efforts didn’t change Jason Lezak’s behavior.

Finally in the fall of Jason’s junior year Coach Wilson gave up trying to change him. The coach held him accountable for his behavior and kicked him off the team. One week later Jason approached Gregg to see if he could return.

Another week later Jason came to see his coach again and told him,  “I really want to swim.”

This time Jason would give a third effort. But first he needed more information and ideas from experts. He spoke with his mother who suggested that he write out a contract for a new commitment and present it to his coach in the hope of being reinstated on the team. Jason did just that.

Coach Wilson reviewed the contract, consulted his staff and they decided to give Jason another chance with conditions. “When you sign your name on this contract,” Greg told him, “you will be making a huge impact on your life. You are placing your integrity and character on that piece of paper.” In this process the coach was helping Jason Lezak change his life. One day this moment would also enable Michael Phelps to have the chance to win eight Olympic gold medals.

Lezak’s final step to reinstatement on the UCSB team was to apologize to his teammates for his behavior, further experiencing the emotional aspect of speaking change into his life as he promised better effort and substantially improved behavior moving forward.

Jason’s new effort helped him train harder and therefore race faster. He began to win─even racing against swimmers from the big name schools. He qualified for the NCAA Championships for the first time. Perhaps Jason had found that second and third effort wasn’t so difficult after all. And like an alcoholic that simply takes sobriety one day at a time, good character that can be exhibited in second and third effort only need be applied…one-day-at-a-time.

That summer of 1998, he qualified for his first USA National Team competition. But it wouldn’t be held until 1999, so he would have to wait another year for it to take place, after college graduation. Then why not swim another year and compete at the Olympic Trials in 2000?

Eight years later he would speak belief into his team and himself at a team meeting prior to the 2008 relay when he implored them to win.  Garrett Weber-Gale who swam the second leg on the relay said later, “I could see in his face the pain of losing like that [2000 & 2004].”

And so as Jason Lezak neared his turn with 50 meters remaining and trailing Bernard he replaced the thought of ‘no way’ by speaking second and third effort into himself. “I changed,” he said afterward. “I thought, ‘That’s ridiculous. I’m at the Olympic Games, I’m here for the United States of America. I don’t care how bad it hurts, I’m going after it.’

“I just got a super charge.”

Lezak surged back toward Bernard, hugging the lane line, riding his opponents wake an inching closer and closer. His second effort pulled him even with Bernard as they neared the finish. And then his third effort to extend his fingertips quickly to turn the clock off by depressing the touch pad before the Frenchman kept Phelps’ dream of eight gold medals alive. Then USA National Team coach Mark Schubert, called Jason’s 46.06 split the greatest relay swim in Olympic history.

Ten years before Jason Lezak had no team and had no coach. In 2012 he earned another Olympic berth at 36 years old when he finished ninth in the semi-finals of the 100 freestyle, but because of Ryan Lochte’s scratch was able to move into the final eight to race for the USA Team.  With yet another surge for the wall he finished sixth to earn a last spot on the squad for the relay and a place on his fourth Olympic team.

It seems that Jason Lezak has learned well the value of giving a second and a third effort. Today, by all accounts, this man of great character is a terrific father and husband. He also enjoys speaking to groups and telling them how he replanted the seeds of third effort at a late age, how they grew and how they blossomed.

For more information or to order Chuck Warner’s books Four Champions, One Gold Medal or …And Then They Won Gold, go to www.areteswim.com (access Books * Media) or the American Swimming Coaches Association. You can follow Chuck Warner on [email protected]

Thanks Hannah! Your view is the very reason for writing “Four Champions, One Gold Medal'” as well as “…And Then They Won Gold”

I’m reading 4 Champions… for a second time. I can’t wait to get the new one. Thank you writing these Coach. Such an inspiration, and I love sharing the stories with my athletes.

I love this idea of second and third effort, and I love the story of Lezak. Great to read, and an excellent story to pass on to young athletes! (And older ones, too, for that matter!)

Great story about how you can turn things around with your thoughts and behavior on a macro or micro level, over the course of a lifetime, or within 50 meters of swimming.