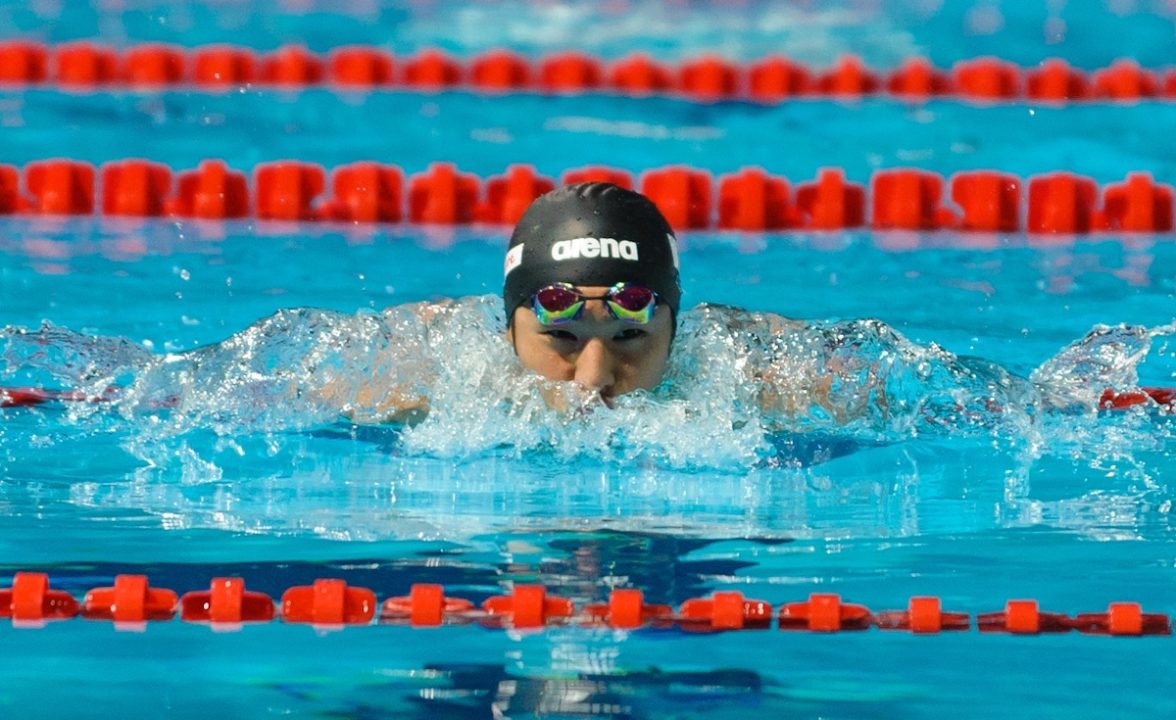 Seto was expected to do damage across three events, but has yet to step on any level of the medal podium in Kazan. Archive photo via Victor Puig

With the swimming portion of the 2015 FINA World Championships now halfway over, we can take stock of how well swimmers have fared thus far versus their predicted performances.

One name that has differed dramatically between actual and expected results is Japan’s Daiya Seto.  Seto came into Kazan ranked 2nd in the world across his three signature events – the 200m butterfly, 200m IM and 400m IM races.  He was SwimSwam’s pick to win both the 200m fly and 400m IM, but has yet to step atop the podium. So where has he been?

In the 200 fly, his first event, Seto has set a strong precedent as a threat internationally, having ended 2014 with a best time of 1:55.59, then moving on to winning a gold medal at the 2014 Asian Games..  Seto also snagged the top prize at the 2014 Pan Pacific Championships to establish himself as a major international player. This year, he came into these championships with the second-fastest time in the world, a 1:54.46 he registered at the Japan Open in May, setting himself up as one of the top prospects for gold.

In Kazan, Seto started off strongly in the 200 fly heats, earning the 3rd-fastest seed in a time of 1:55.60, followed by a solid 5th place performance in the prelims of 1:54.95.  However, the Japanese weapon faltered in the finals, dropping back to 6th and clocking a time of 1:55.16, rendering himself a non-factor in the race that was later won by Hungary’s Laszlo Cseh in a time of 1:53.53.

The 200m IM actually ended being worse for Seto, as he failed to even make it into the final here in Kazan. Besides Japanese teammate and injured elbow-ridden Kosuke Hagino’s 1:56.30, Seto entered Kazan with the fastest time in the world of 1:56.82.  With the United States’ Ryan Lochte as the defending champion, and no Hagino or Phelps, Seto was pegged to be his chief rival at Worlds.

In yesterday’s morning heats, Seto managed to pull down a 1:59.11 to earn the 7th overall seed, but then slipped all the way to 14th – and out of the finals – with a sub-par outing of 2:00.05 in semi’s.  His almost-second slower time cost him a spot in the finals and now leaves Japan out of the mix for medals entirely in the event.

Comparing the splits of Seto’s Worlds semi performance to that of his Japanese Nationals, it’s eye-catching how much slower Seto was at this meet – to the tune of 3.23 seconds:

Possibly having swum the 200 butterfly less than an hour prior to the 200 IM semi-finals indeed took more of a toll on the competitor than what was anticipated.  The result?  Seto wound up not even finaling in an event in which he finished in 7th place in Barcelona.

Finally, we have yet to see what Seto will do in his final individual race, the 400m IM scheduled for Sunday.  His 4:10.04 from the Japan Open checks in as the 2nd fastest time of the year, but, as we’ve seen thus far, that credential gets thrown out the window as soon as the swimmers step onto the blocks.

With the Japanese men not performing up to par, the Americans might actually bag gold in the 200back, 200IM and 400IM.

Actually all of the Japanese team has been a non-factor so far. After their fantastic performance at PanPacs last summer, they seemed to be a the verge of an explosion.

Pretty accurate. With all the talk about the US underperforming (the US now leads the medal table in gross medals, though ours are less shiny than Britain) Japan has been REALLY flunking.

Seto (who I picked to win the 200 fly sadly) very unimpressive. 1:55 is poor. 1:59 in the IM is poor, but almost acceptable in the prelims, but 2:00 is unacceptable and surprising.

Irie has not been up to scratch either in the 100 back, and doesn’t seem to be looking good in the 200 back (sadly I picked him for 2 medals). The door is open for Murphy.

Koseki missed the final with a 1:00, and wasn’t much better in the… Read more »

Yup, Japan could really use Hagino at this meet. They are not going well.