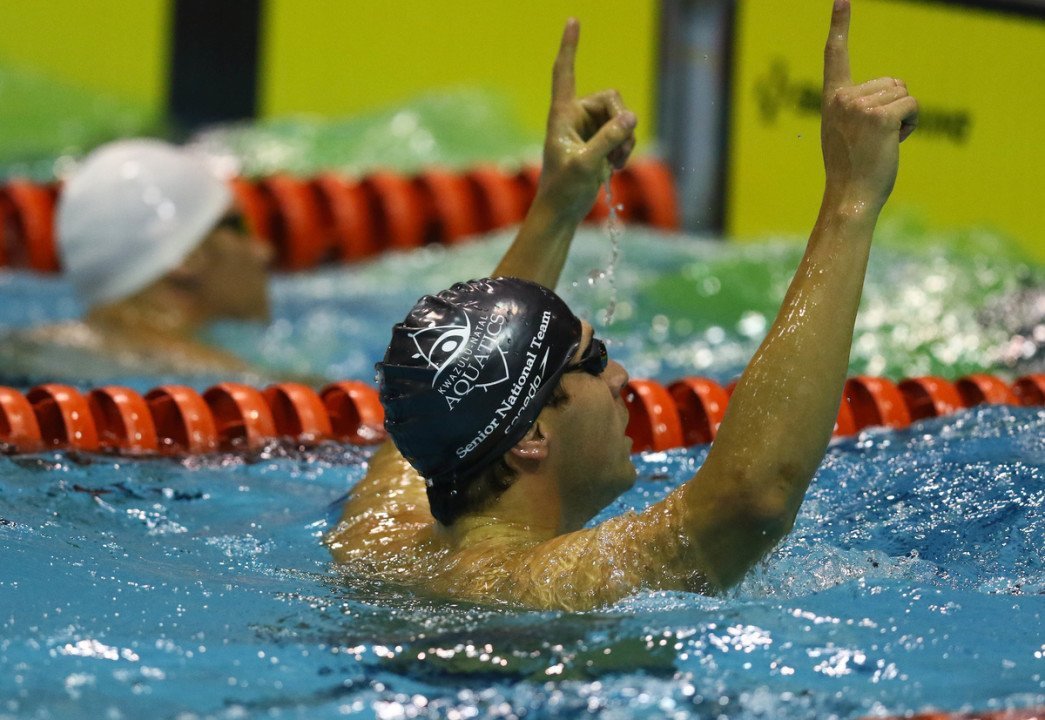 The South African men continued to deliver on day 4 of their national championship meet, while the country finally saw its first female appear on the World Championships roster. 2016 Olympic finalist Brand Tandy led the semi-final charge in the 50m freestyle tonight, after already scoring a super swift 22.07 in the morning’s prelims to notch a qualifying time for Budapest. But the 25-year-old former Arizona Wildcat took things to another level in the final, scoring a wicked-fast 21.99 to snag the national title.

Tandy’s outing tonight checks-in as the 5th fastest of his career. The top 3 times ever for this ‘superman off the blocks’ he snared in Rio, nabbing times of 21.94 and 21.80 before ultimately registering 21.79 to take 6th in the Olympic final. We’ll see if he has any more in the tank tomorrow night to challenge his personal best. In the meantime, his 21.99 now ranks as the 4th fastest time in the world this season.

The mighty force that is Olympian Chad Le Clos also got the job done in a major way again tonight, easily qualifying for the men’s 100m butterfly with a monster time of 51.56. Starting the day with a slid 52.63 morning swim, Le Clos threw down the heat in tonight’s semi to blow away his previous season best of 52.20 set at the Grand Prix in Durban in February. In fact, Le Clos’ time tonight is the fastest he’s ever raced in his home nation of South Africa. It also isn’t terribly off the 51.14 he clocked in Rio, a time which wound up giving him a share of the silver with American Michael Phelps and Hungarian Laszlo Cseh. The 100m butterfly final in Durban is tomorrow night.

After missing out on World Championships qualification in the 50m and 100m breaststroke, Tatjana Schoenmaker broke through to notch a FINA A cut in the 200m distance tonight. Stopping the clock in a speedy 2:25.23, Schoenmaker established a new personal best in the event, but also dipped under the 2:25.91 qualification mark for Budapest. Not only does Schoenmaker represent the only female on the South African World Championships roster to date, but she is the first female from the nation to make an elite international meet since 2013. We’ll have more on this feat in separate post.

That is such a great title for the article 🙂