Le Clos Putting World On Notice With 1:46.8 200 Freestyle In Durban 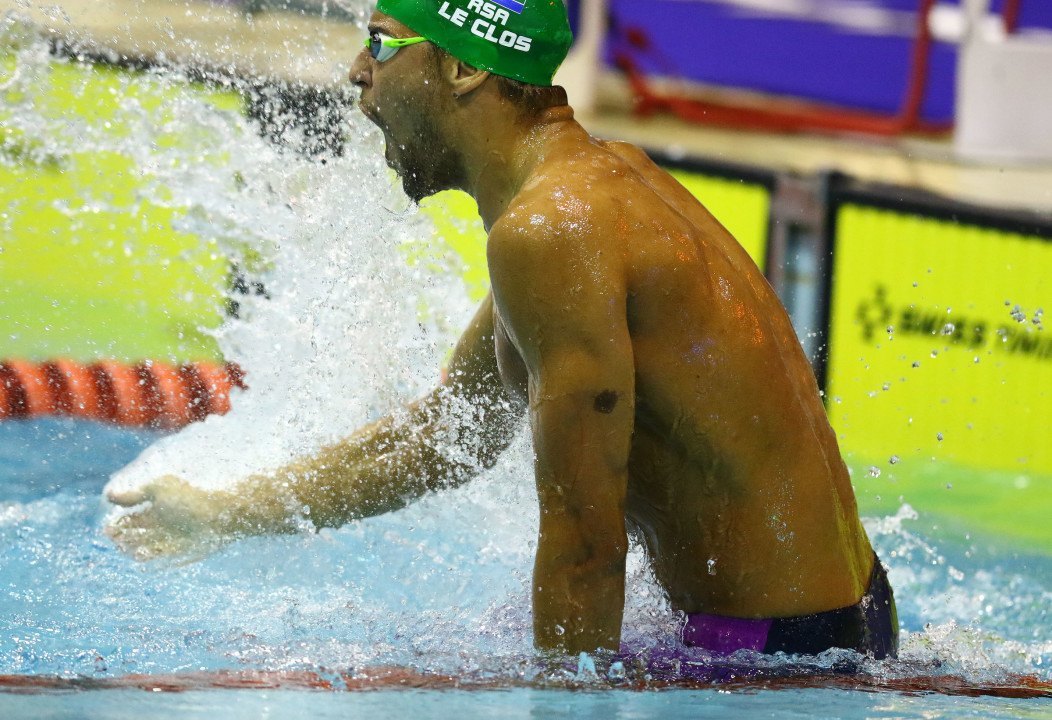 The South African stars were on full display on day 3 of their National Aquatic Championships, as 2016 Olympians Chad Le Clos and Cameron van der Burgh each collected another World Championships qualifying mark on the night. First up was Le Clos, who blasted a 200m freestyle final time of 1:46.84 to sail past domestic rival Myles Brown to take the gold in Durban. He had notched a FINA A cut during last night’s semi-final with his 1:47.73, but the 24-year-old Olympic silver medalist in the event lowered his mark to check in as the 2nd fastest swimmer in the world in the event thus far this season. Splits for Le Clos were 24.28/26.62 (50.90)/27.91/28.03 (55.94)

Teammate Myles Brown clocked a solid time as well, finishing behind Le Clos in 1:47.55. That was just .04 off his semi-final outing from last night, but still well comfortably under the FINA A qualifying time of 1:47.73. Brown now ties New Zealand’s Matthew Stanley as the 7th fastest time in the world this season.

The pair doubled up on swims tonight, also tackling the 200m butterfly where they finished 1-2 in the semi-final. Both did what it took to notch places in the final, with Le Clos nabbing a time of 2:00.88 while Brown sits just behind in 2:02.19. Look for both men, especially Le Clos who won gold in this event at the 2012 Olympic Games, to fire off something special tomorrow night in the final.

Breaststroking ace Cameron van der Burgh was at it again tonight after his impressive 59.73 100m breaststroke win in last night’s final. Tonight in the semi of the 50m sprint breast, van der Burgh nailed a FINA A cut of 27.06 to take the top seed and edge close to his national record of 26.67 from 2009.

Tatjana Schoenmaker doubled up on swims tonight, racing in the women’s 50m breaststroke where she took the top seed in 31.68. Schoenmaker also took on the 100m breaststroke final, where she came in as the top seed with her time of 1:07.99 from last night. That mark sat just under half a second away from the FINA A cut, which sits at 1:07.58. However, the 19-year-old wasn’t able to replicate her sub-1:08 performance, instead stopping the clock at 1:08.36.

Schoenmaker will now need to depend on her 200m breaststroke event as her last chance to notch a spot on the South African World Championships roster. If accomplished, she would become the first South African woman to have qualified for an elite international meet in 3 years.

I guess he likes the sprint and hold on strategy, I wonder if he will transfer this tatic into the 200 fly as well?

Can you really call Myles Brown a rival? Especially in a race Le Clos won silver in at Rio

Uberfan – In my opinion, yes. As stated, Brown is a ‘domestic’ rival, proven by the fact he won the 200m freestyle national title over Le Clos in 2015.

Seems like the only thing he put the world on notice about is a 28.0 last 50.

He needs to work a bit harder. It’s no good claiming to have the fastest time in the world in 2017, a week before the Aussie trials, with a 1:46.8 under your belt. It betrays the idea that you wanted to lay down a marker, and when the boys from down under swim right past you, you start to look a bit feeble. C’mon Chad, step it up a gear.