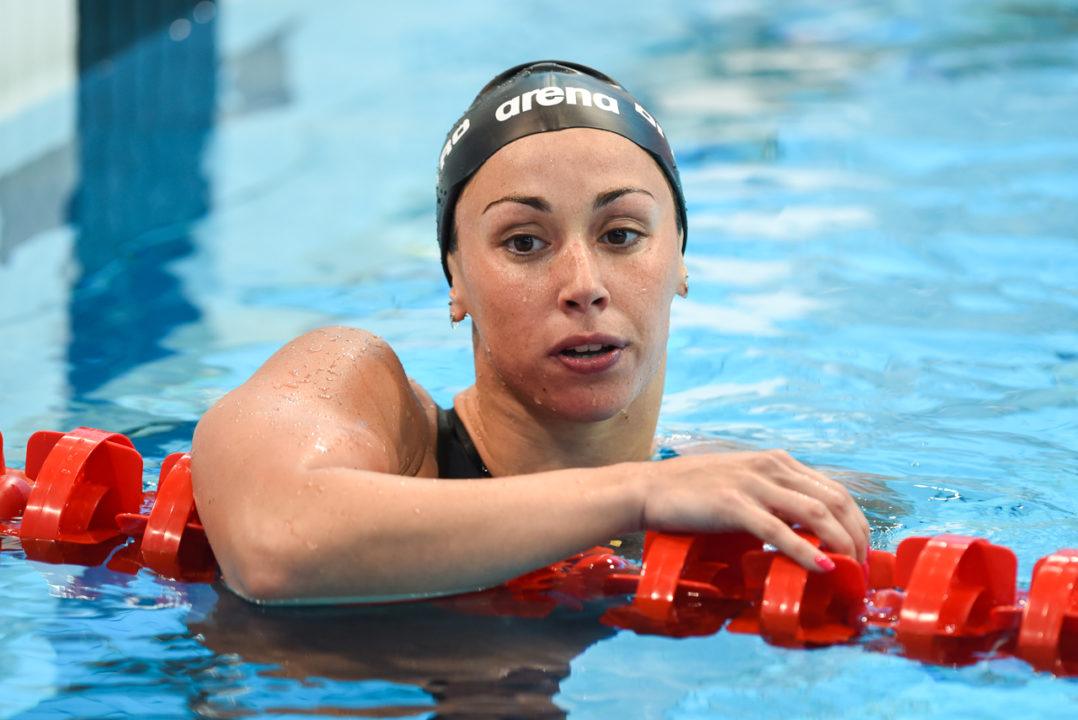 Italian record holder Silvia Di Pietro has made her return to the pool after suffering an injury in her patellar... Stock photo via Peter Sukenik/www.petersukenik.com

Italian record holder Silvia Di Pietro has made her return to the pool after suffering an injury in her patellar tendon.

Before her injury, Di Pietro had breakout performances at the 2016 Short Course World Championships in Windsor, Canada. She sprinted to a silver medal in the 50 free in an Italian record of 23.90. Di Pietro also won silver in the 400 free relay and bronze in the 200 free relay.

2017 then became a downward spiral for Di Pietro. While preparing for the World Championships in Budapest, Di Pietro had injured her patellar tendon. This would not have been the first time the Italian sprint star had to take time off from an injury. In 2010, Di Pietro had also suffered a shoulder injury that cost a year off from training.

In late August, Di Pietro took her first dive off the blocks and continues to make her comeback from there. Di Pietro posted on her Instagram today on her progress over the last 5 months and how she continues to push through her recovery.

The caption translates to:

“Short film (divided into 4 MINI VIDEOS) of the last 5 months, from the surgery to the first dive. There is still a long way to go …. thanks to those who have been at my side so far.”

I feel the need to test the down vote bot theory again as a result of all the down votes I received on the Rikako Ikee story. Please don’t downvote this if you are a real commenter (of course feel free to upvote for exposure). I’m trying to count how many programmed downvotes I receive. TIA (stands for thank you in advance)

Instead of getting proud that so many people got deeply moved by your masterpieces you are trying to convince everybody that that is just one person who got obsessed with you and anybody else don’t care at all of what you are writing.

You said a silly thing and it probably came off to some people as ignorant. Some people will downvote that, no conspiracy theory necessary.

I don’t think it would be hard to write a macro that switches IP addresses and downvotes over and over again, but I don’t think that is what happened. You wondered why women from non-Asian countries weren’t getting awards at the Asian Games and Yohzik pointed out the obvious. If you put up an alley-oop like that near your own basket, you can’t get mad when the crowd cheers that someone dunked on you.

Lol, I’m a real commenter and I’m downvoting the hell out of this.

Boy, you crazy. 87 total votes isn’t out of the norm, and it was a universally dumb-as-hell post lolol.

Take the L and move on.

Looking at the picture of Silvia di Pietro I am beginning to understand why Venus de Milo has no arms: she probably was a great swimmer.
Silvia’s eyes are very attractive and her eyebrows are perfect but all this beauty is securely guarded by such a strong hand.

Her arm looks bigger than it is as it is resting on the lane line.

Then take it off the picture. That was the point with the example of Venus. 😀

My daughter-in-law cut off all my attempts and stated firmly that under no circumstances her daughter will swim competitively at any level.

Great, great news that Silvia Di Pietro has made her return to the pool.
So courageous swimmer: she injured in early 2017 and swam through the pain the rest of the season and at Worlds in Budapest.
The best of luck at this talented and fearless Italian swimmer.
In general, good news also from the other great Italian swimmers struggling with injuries in the last season: both Detti and Martinenghi have made their return to training.
But Di Pietro was the most complicated and heartbreaking case.