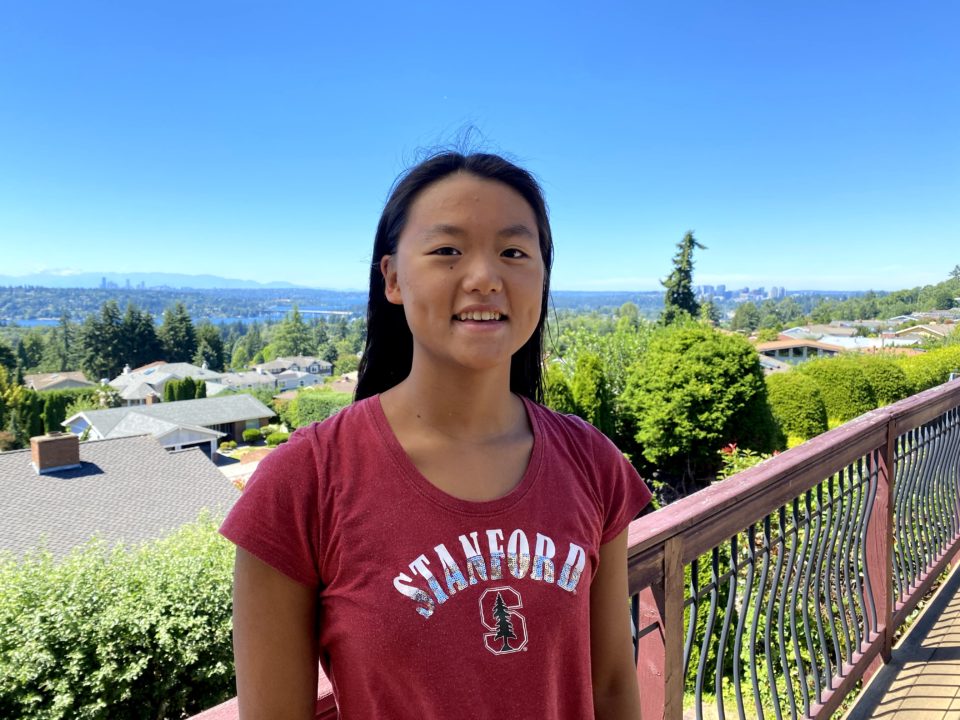 Stanford sprinters swept the podium in the women’s 50 free, led by sophomore Amy Tang (pictured above), who took first place with a 26.10.

Isabel Wu took down the girls 11-12 Pacific Swimming record in the 400-meter IM with a 5:08.34 at the 2022 Super League Summer LC Finals last weekend in Santa Clara, California.

The 12-year-old Santa Clara Swim Club (SCSC) member shaved more than four seconds off her previous best from just a few weeks prior. In the process, she went more than a second faster than SCSC teammate Lyla Elaidy, who held the former Pacific Swimming age group record of 5:09.70 from 2019. Wu also became the third-fastest performer in the event this season for her age.

Her SCSC teammate, 14-year-old Davina Huang, won the 100 fly with a 1:01.50. She dropped more than a second off her previous best from last month, now ranking as the fourth-fastest this season for her age. Huang tallied six personal bests at the meet, including a runner-up finish in the 200 fly with a 2:17.31 that also ranks as the fourth-fastest this season among 14-year-old girls.

Kelsey Zhang of Palo Alto Stanford Aquatics had a huge meet, adding two more Junior Nationals cuts to bring her total to six this year. The 14-year-old crushed a new personal best by nearly four seconds to sneak under the standard in the 200 free with a 2:03.73, sixth-fastest this season for her age. Zhang also hit a Junior Nationals cut In the 50 free with a 26.37, fourth-fastest this season among 14-year-old girls. She had already met Junior Nationals standards in the 800 free, 100 fly, 200 fly, and 200 IM, the latter in which she swam a 2:19.27 to improve her personal best from earlier this month.

Lila Heffernan of North Bay Aquatics notched her third Junior Nationals cut in the 200 free with a 2:02.47, nearly four seconds faster than her previous best from last month. It marks the ninth-fastest time this season among 16-year-old girls. In the 100 free, she put up a personal-best 56.41, seventh-fastest this season for her age. Heffernan already held Junior Nationals cuts in the 50 free and 100 free.

Stanford sprinters swept the podium in the women’s 50 free. Sophomore Amy Tang took first place with a 26.10, just .06 seconds ahead of senior teammate Emma Wheal. Graduate student Morgan Tankersley wasn’t far behind in third with a 26.31.

Audrey J-Cheng of Palo Alto Stanford Aquatics clocked a personal-best 2:37.31 to win the 200 breaststroke. She’s now the 17th-fastest swimmer in the event this season among 17-year-old girls. Erica Jaffe of Sierra Marlins Swim Team triumphed in the 200 back with a 2:15.85, making her the 11th-fastest performer this season among 15-year-old girls. She also registered a personal best in the 100 back with a 1:03.93, placing fourth behind a trio of Stanford swimmers.

Eunice Lee of SCSC left the meet with six new personal bests, including a 4:57.56 in the 400 IM that earned her a first-place finish. The time moves her up to No. 14 this season among 15-year-old girls.

On the boys side, Luka Mijatovic of the Pleasanton Seahawks racked up four personal bests, including a 16:41.14 in the 1500 free that puts him as the fourth-fastest performer this season among 13-year-old boys. In the 100 fly, he posted a 1:00.33, moving him up to 13-fastest this season for his age.

Shareef Elaydi of SCSC also hit some impressive marks, including a 59.39 in the 100 fly that made him the sixth-fastest performer this season among 13-year-old boys. He also clocked personal bests in the 100 breast (1:09.92) and 200 breast (2:33.21), both of which rank him inside the top 20 performers in the event for his age so far this season.