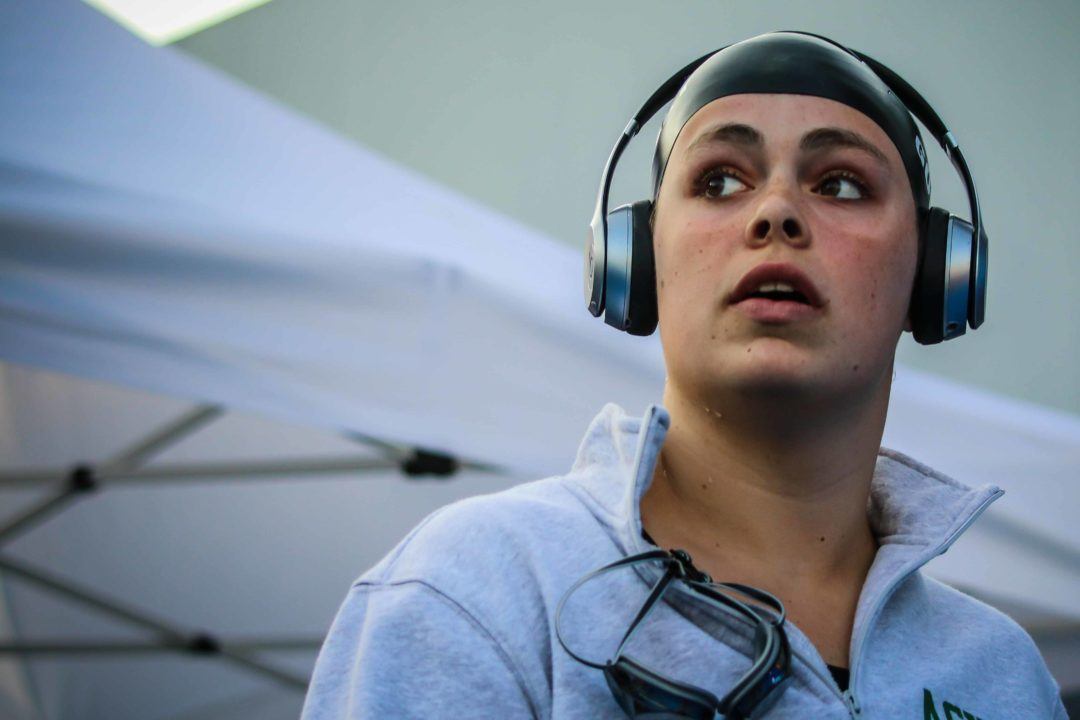 Isabel Gormley is still listed on Stanford's roster following a one-year suspension by USADA, but she will not compete for the Cardinal this season. Archive photo via Jack Spitser/Spitser Photography

Isabel Gormley remains listed on Stanford University’s 2022-23 swimming and diving roster following a one-year suspension by the U.S. Anti-Doping Agency (USADA), but the junior will not compete for the Cardinal this season, a school spokesperson told SwimSwam.

Gormley is one of at least two NCAA Division I swimmers who are currently suspended by a non-NCAA anti-doping authority. Last week, a Rutgers spokesperson told SwimSwam that Elizaveta Ryndych voluntarily removed herself from the Scarlet Knights’ swimming and diving roster while serving a two-year suspension by Russian Anti-Doping Association (RUSADA). The NCAA is not a signatory of the World Anti-Doping Code, and therefore suspensions given by USADA and RUSADA are not mandatorily applied to collegiate competition — although that could potentially change soon.

Gormley’s one-year period of ineligibility began on March 22, 2022, the date her provisional suspension was imposed. In addition, Gormley has been disqualified from all competitive results achieved on and subsequent to December 12, 2021, the date of her third Whereabouts Failure in a 12-month period, including forfeiture of any medals, points, and prizes.

“Accurate Whereabouts information is crucial for effective out-of-competition testing, which helps deter and detect doping by enabling no-notice sample collection,” USADA said in a press release. “This is especially important because some prohibited substances have limited detection windows.”

The sanction is consistent with recent punishments for similar violations, aside from Ruta Meilutyte’s two-year suspension by FINA in 2019 for missing three anti-doping tests.

Gormley’s last meet was the 2022 Pac-12 Championships, where only points came from a C-final swim in the 400 IM.

In 2019, Gormley was a member of the US Junior National Team and raced as part of an invited group at the Mel Zajac Jr. International meet and the 2019 World Junior Swimming Championships. There, she won a silver medal in the 400 IM in a time of 4:39.15.

SwimSwam only found collegiate meet results for Gormley during the period where results are forfeited, so while that means those times can’t officially be included in USA Swimming records, there are no placements or other awards to reallocate as a result of the penalty.

A distance freestyle and IM specialist, Gormley was ranked as an honorable mention on SwimSwam’s top 20 high school recruits of 2020.

This is a gormless move by Standford.

Why was she in the testing pool? Is it because she was formerly on US Junior National Team? Or are all Division 1 athletes now subject to random USADA testing?

Good question. At what time do athletes go in or out of the testing pool?

This is lame. Amateur level sport. No-one should have the right to demand 24/7 whereabouts and access to test you unannounced.

It should be world top-16 only who have to be tested twice a month by appointment.

Testing never stops the cheats but it makes life hard for people who aren’t even earning any money from sport.

Random and unannouced testing is integral for catching cheaters.
And yes, everyone needs to play by the same rules. It’s the only way to be fair.

Does it actually catch them, though? I think most of the suspensions are from self-reported things people had no idea was banned or just missing check-ins.

Flip that around: If athletes knew that they would only be tested in competition, would they use more PEDs out of competition? Random testing discourages OOC PED use.

Maybe the only way to be fair is to make the testing requirements so draconian that only the cheats will feel like its worth it to prove they are clean.

The problem with ‘by appointment’ testing is that many drugs have a half-life short enough to cycle on-and-off in between bi-monthly appointments.

Collegiate athletes don’t have to be in the USADA/WADA testing pools. If they only compete in collegiate athletics, they aren’t subjected to the jurisdiction of WADA/USADA, only the NCAA programs, which are notably lax.

So what are the qualifications to be in the testing pool?

USADA has a two-pool process.

Those who compete in a qualifying event to represent the US in international competition are in the pool. Those who have been named to international teams are in. License holders in a recognized sport by an NGB.

Some go into a Registered Testing Pool, which has to do the daily Whereabouts. Others are in the “Clean Athlete Program” have a much lower standard for Whereabouts filings – they just have to generally keep USADA apprised of where they’re sleeping most of the time. Foreign athletes in the US are all in the USADA testing pool.

Isabel is in the pool via qualification for the US Olympic Trials. Because of… Read more »

There’s definitely notification. There has been some problems with younger athletes (who are generationally less likely to use email) missing emails, but there’s plenty of notification.

For those who don’t know, in whereabouts testing, you give USADA a one hour window and you tell them where you can be found during that hour on a particular day. It’s common that people pick the hour before they normally wake up. You initially once a quarter but you can update your whereabouts online after that. When the tester shows up at the address you’ve told them you will be, they knock if they can access your door; if it’s limited access housing like a college dorm, they’ll call you and you are… Read more »

Testing by appointment is worthless. It’s only a one hour window each day where they need to be at a specific location available to be tested and the athlete can be wherever they want during the other 23 hours.

It’s also worth noting that athletes can update there whereabouts as frequently as they want to.

I can’t reliably say “most,” but many athletes I speak to make their Whereabouts either their practice time, which is pretty consistent and usually just needs to be updated when they’re travelling for a meet or something else.

Any opportunity for a cheap shot at Meehan, amirite? Not sure how this is his fault but whatever

I have zero tolerance for the Greg Meehan apologists.

If you look at how many downvotes all of your comments get id say it’s safe to say a huge subset of people have zero tolerance for your terrible takes on literally everything.

no one is an “apologist” for him, it’s just absurdes he’s getting dragged into this

meehan: *insert now why am i in it? meme*

Slight mistake: She was actually a Freshman in 2021