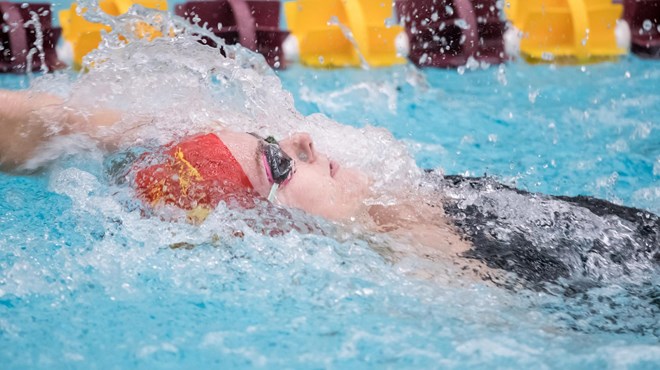 The Iowa State swimming and diving team took the win over South Dakota by a score of 176-64 on Saturday. The Cyclones captured every event. Current photo via Iowa State Athletics

The Iowa State swimming and diving team (3-0, 0-0 Big 12) took the win over South Dakota (1-2, 0-0 Summit) by a score of 176-64 on Saturday. The Cyclones captured every event victory and set two new DakotaDome pool records, while improving their series record against the Coyotes to 13-0.

The Cyclones picked up right where they left off, taking the victory in the 400 meter medley relay. The team of Emily Haan, Lehr Thorson, Lucia Rizzo and Sophia Goushchina combined for the pool-record time of 4:17.80.

Lucia Rizzo took ownership of the 200 meter IM victory with 2:22.41. With the win, the senior inched closer to cracking into the top-20 all-time point scorers list as 23 points now separates her following the dual. The 200 IM led into the first dive break where the Cyclones led the Coyotes 78-15.

In the next event, Brinley Horras cleared 100 career points with her win in the 400 meter free. The sophomore nailed down the 10th event win of the dual for the Cyclones with her time of 4:29.31.

On the boards, Michelle Schlossmacher Smith dove to her third and fourth victory on the weekend. The senior totaled a score of 262.73 on the one-meter. Jayna Misra took second with 258.68.

On the three-meter, Schlossmacher Smith grabbed another first-place finish with 290.93, her third Zone cut in 24 hours. Joscelyn Buss dove to a new PR of 272.93, topping her previous PR set earlier this season by .91.

The weekend closed out with a 200 meter free relay victory. The team of Ziegert, Andie Quirke, Goushchina and Caughron took the final victory with 1:48.68.

“Our women did an outstanding job standing up and competing,” Head Coach Duane Sorenson said. “We swam in a 25-meter pool versus most of our meets being in 25-yard pools, so a little different strategy and stroke count. They were out there lighting it up. Started off the meet by setting the pool record in the 400 medley relay and then Winter Craig set the record in the 200 fly. It was fun to see her hard work really pay off.”

The Cyclones return home Saturday, Oct. 30 at 11 a.m. for the first home dual of the season. Admission to Beyer Pool is free and open to the public.

The reigning Summit League Women’s Swimmer of the Week, Timmer remained undefeated in the 50-yard freestyle this season, clocking a winning time of 24.04 seconds. She later made it a sweep of the sprints by earning a victory in the 100 freestyle by nearly two full seconds in a time of 52.21 seconds.

The Jackrabbit duo of Kelsey Kocon and Emma Walz finished second and third, respectively, in a closely contested 100-yard backstroke race. Sophia Goushchina of Iowa State won the race in 58.04 seconds, followed by Kocon (:58.36) and Walz (:58.46).

Timmer and Kocon made up half of South Dakota State’s runner-up 400 freestyle relay in the final event of the night, teaming with Emma Bachelder and Makenzie Herzog for a time of 3:34.72. Bachelder also placed third in the 100 freestyle individually in 54.68 seconds for an SDSU squad that fell to 1-2 in duals on the season.

In diving competition, Abbi Rouse placed second in 1-meter diving with a score of 242.55 points. Aleni Stoakes placed third both in 1-meter diving and on the 3-meter board with respective scores of 235.57 and 247.43.

UP NEXT
Both the Jackrabbits’ men’s and women’s squads will be in action Saturday, traveling to Fort Dodge, Iowa, for a double dual against Iowa Central and Barton (Kan.). Start time is 1 p.m. at Fort Dodge High School.