Inside The Beautiful Mind of Alex Kostich 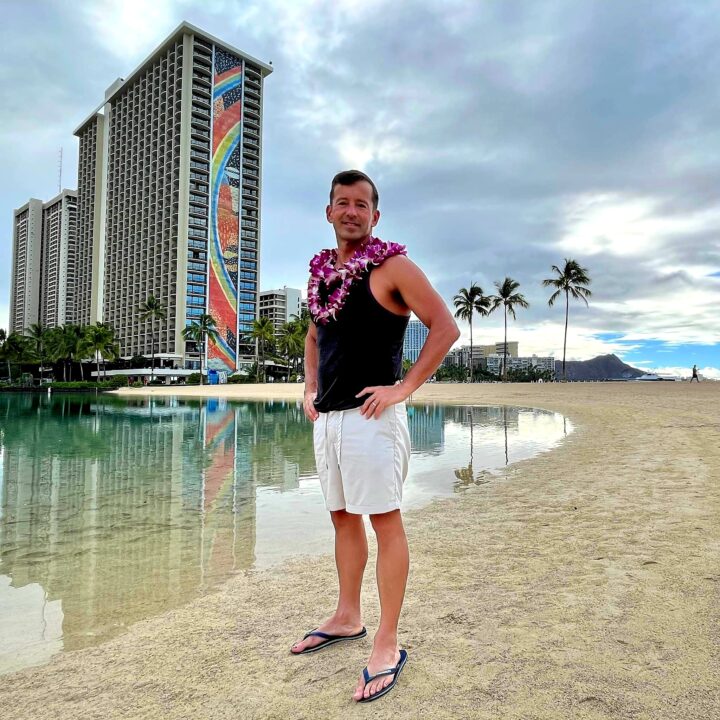 Kostich, 52, recently placed second in the Double Waikiki Rough Water Swim, a 7000-meter swim from San Souci Beach to Ala Wai Channel and back. Current photo via Steve Childers

Psychology Today defines a beautiful mind as calm, grateful, clear, spontaneous, and caring. A mind which is perfectly at ease with itself, with everything and everyone around it. It’s a mind which is tranquil and serene, no matter how busy or quiet life may be. A mind that can adjust in a natural and effortless way. I think they were describing Alex Kostich, a Stanford graduate who for years has worked in the movie industry. Alex has done the Waikiki Rough Water Swim 28 times, won it often, and has always been in the top 10.

This past weekend Alex participated in the Double Waikiki Rough Water Swim, a 7000-meter swim from San Souci Beach to Ala Wai Channel and back to San Souci Beach. Race Director Ryan Leong said, “After a two-year break we were blessed with stunning conditions and a fast field. Everyone who started finished. We could not have asked for a better return to racing.”

The race was won by 19-year-old Duke Wieland from Australia who stated, “It was great fun, heaps of sea life and I was a minute off the record. Alex and I flew down to the turn buoy but on the way back we had some chop and currents.”

And Alex, who is 52, placed second. On his mindset, Alex explains, “I actually go into a weird zone or trance-like state…almost like a dream state. I’m not really thinking linearly or clearly about anything – which is why I love swimming so much- I guess it’s similar to those Sufi dancers in Turkey that just spin around in circles as they enter nirvana… that’s kind of how I feel when I am swimming! But during workouts and more relaxed swims, I actually think about all sorts of random things…solving problems at work….where I want to travel next… balancing my checkbook…to do lists…”

Alex added, “During races, I rarely think strategy or technique…it’s too taxing mentally. So I just let my mind wander and just find myself in a dream state, thinking in circles almost.”

There are four different brain waves: Delta, Theta, Alpha, and Beta. In our waking state, we spend most of our time in Beta waves. As athletes, we know exercise helps us think better. But what about exercise combined with meditation? In a study from Queen Mary University of London (Luft et al., 2018), it was found that alpha brainwaves in the right temporal lobe function serve as a neutral mechanism that helps the human brain inhibit obvious associations in order to connect the dots of seemingly unrelated ideas in fresh ways. Hence creativity.

On the women’s side, Sandie Easton was fourth overall, she said, “for longer swims I try to go in with a couple of dance songs in mind. I love house music and thinking of the relentless beat tends to drive my stroke cadence and positive thoughts. Even with an escort in longer races I try to adapt to changing conditions. Especially when a Galapagos Shark escorts you for part of the second half of the swim.” (This actually happened.)

Galapagos sharks are “threat free” thanks to their relatively untouched sources of food. This lack of food scarcity in their environment has made them pretty docile creatures, especially when it comes to food items they don’t need (read: us humans). But I’m not sure why this one tried to race Sandie. Photo: Galapagos Conservation Trust.

We might not become as great a thinker as Alex Kostich but combining exercise and meditation can allow for breakthroughs in our thinking. After all, Albert Einstein came up with E=Mc2 on a bike ride.

Love reading about Alex’s open water swims and his travels! He’s had an amazing swimming career, and he’s a talented photographer, too.

I am also honored to be friends with Alex.
Cool and nice guy, I hope to swim against him sometime soon.

I am honored to be friends with Alex and he is an incredible human in so many ways!!

Class act and takes the best vacations of anyone I know!