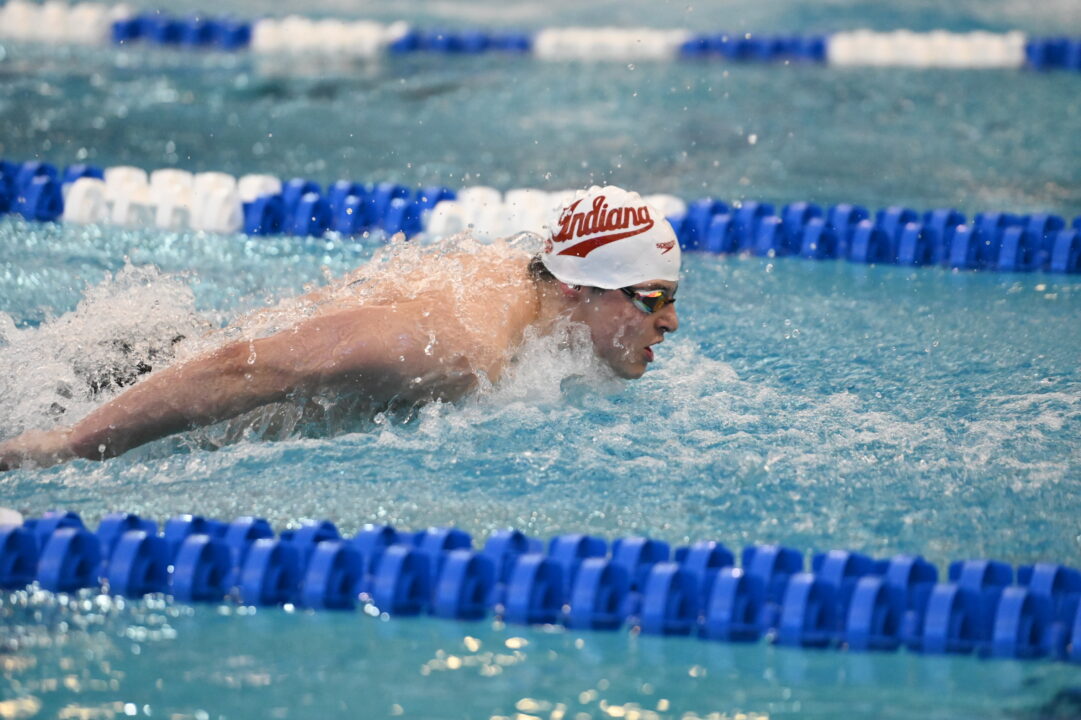 Tomer Frankel and Jack Franzman of Indiana both swam NCAA B cuts during Friday's dual meet against Cincinnati. The Hoosier men and women swept Cincinnati. Archive photo via NCAA

Indiana defeated Cincinnati at home Friday night, with sophomore Tomer Frankel earning an NCAA B cut in the 200 fly for the first time this season and Jack Franzman earning one in the 50 free, his fourth time doing so this season.

The Indiana men won fourteen out of sixteen events on Friday night. In addition to Frankel and Franzman, three Hoosier divers — Andrew Capobianco, Quinn Henninger, and Carson Tyler — earned NCAA Zone qualifying scores on both the 1-meter and 3-meter boards.

On Cincinnati’s side, Hunter Gubeno won the 200 backstroke in 1:47.25. This is his fastest time in a dual meet this season. Even though Indiana exhibitioned some of their swimmers, Gubeno still had the fastest time overall.

The other Cincinnati event winner was Michael Balcerak, who swam the 100 fly in 48.34 to win the event. He also had the fastest time overall, despite exhibitioning on both teams.

The Indiana women had four divers who scored NCAA Zone qualifying times on both the 1-meter and 3-meter: Megan Carter, Morgan Casey, Anne Fowler, and Kristen Hayden. Hayden also secured her first win with Indiana, taking the 3-meter in 377.10.

Erin Shema hit the ground running for Cincinnati, winning the 200 free in 1:49.25. The time also happened to be her personal best. She set her previous best time at AAC Championships last season.

Cincinnati also won the 400 free relay, with the help of Indiana’s exhibitioning.

Indiana will return to the pool on January 8, traveling to Michigan for a dual meet. Cincinnati will return later, hosting Kenyon College on January 14.