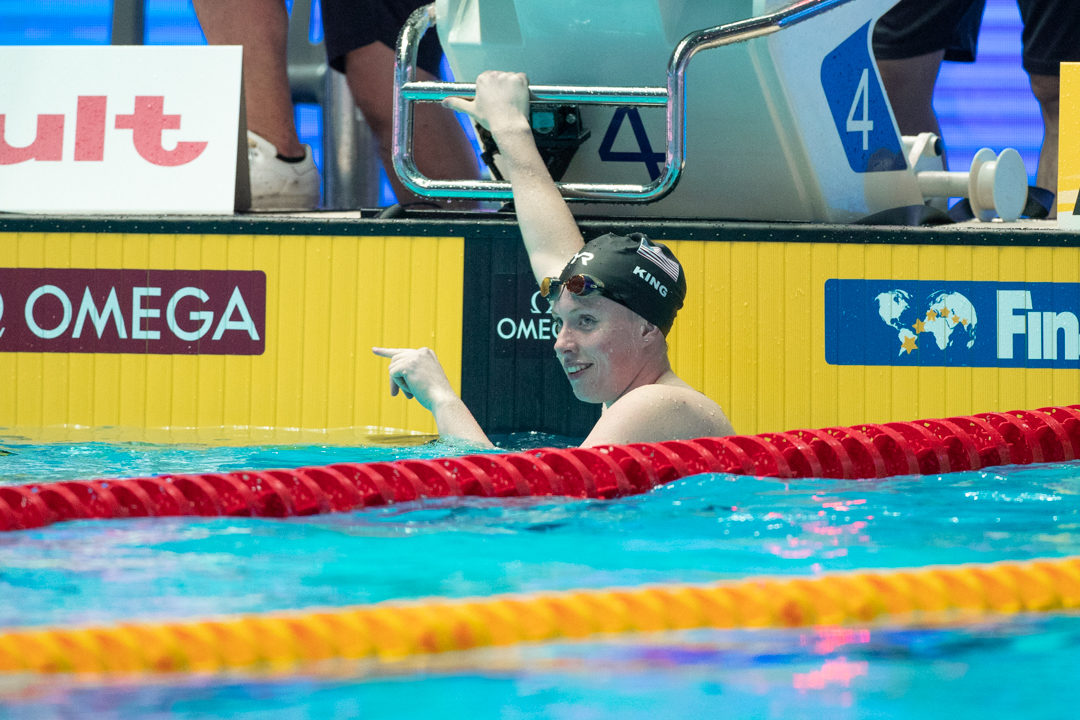 King used her speed to get out to an early lead in the race, splitting 1:07.71 on the first 100, while Lazor touched in 1:09.68 at the halfway mark. Stock photo via “Rafael/Domeyko Photography”

The first day of the Speedo Sectionals meets in Indiana kicked off yesterday. This year, there are two sites for the meet, one at IUPUI in Indianapolis, and another in Elkhart.

Indiana Swim Club 16-year-old Kristina Paegle clocked the fastest time in the women’s 50 free, blowing through the 26-second barrier. Paegle entered the meet with a personal best of 26.02, and swam a 25.72 to get her hand on the wall first. She also picked up an Olympic Trials Wave I cut in the event, and is now just off the Wave II cut of 25.65. Paegle was at the IUPUI site, while 2nd-place finisher Lily Christianson, a 15-year-old from Irish Aquatics, swam at the Elkhart site. Christianson also broke the 26 barrier for the first time in her career, touching in 25.83. She also picked up a Wave I cut with the swim.

Fishers Area Swimming Tigers 15-year-old Josephine Ramey won the women’s 200 back with an blistering 2:09.72. The swim marked a massive drop for Ramey, who entered the meet with a best of 2:13.34. She already had the Wave I cut in the event, and she ended up completely obliterating the Wave II cut of 2:12.94. Carmel Swim Club 17-year-old Madelyn Christman came in 2nd with a 2:12.76. That swim marked a big personal best as well, as she entered the meet with a best of 2:14.65. She also picked up a Wave II cut in the event. Ramsey and Christman were at the IUPUI site, while Club Wolverine 14-year-old Stella Chapman was the fastest at the Elkhart location. Chapman swam a 2:16.49, dropping a whopping 6 seconds from her previous best.

any possibility of linking Kristina Paegle to her news feed? 🙂

They seem to use whichever of season/year makes the swim look better. If this swim were #1 this season they’d probably choose season.

King and Lazor looking good to be Top 2 at Olympic Trials, 2:22 low in season and unrested is really good! I think people expected Lazor but doubted King a bit, and I think she made a statement right there.

I’m really pulling for Lazor to make the Olympic team this summer! This is a really good sign for her chances.

She is one hell of a breaststroker.