What Impact Do the New 2015 NCAA Division I Qualifying Standards Have? 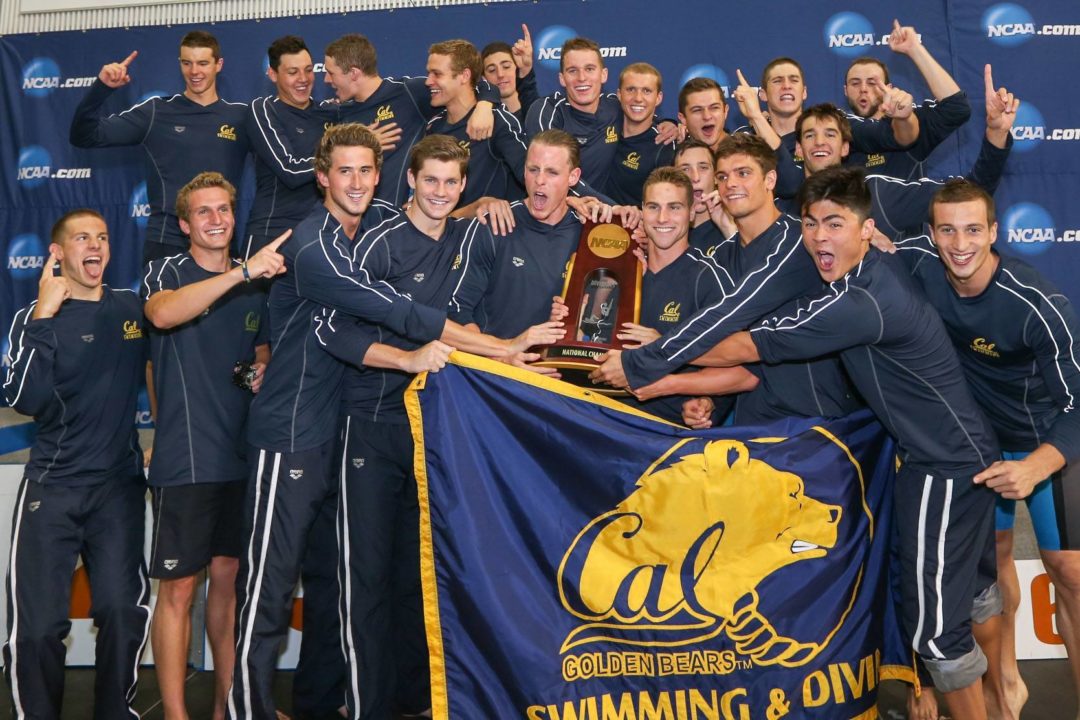 Would the toughened standards have kept Cal from winning the men's NCAA title? Probably not. They would, however, have significantly impacted the NCAA fate of several other teams. Archive photo via Tim Binning/TheSwimPictures.com

The 2014 NCAA Championship qualification standards didn’t change by that much as compared to the ’13 championships, with the exception of the women’s 1650 free (where the A time dipped under 16 minutes for the first time).

In 2015, the overall drops are a little more significant, with the women’s 1650 free automatic qualifying time coming down another 2-plus seconds.

NCAA qualifying standards for individual events, while typically a hot topic of conversation, aren’t really all that meaningful. Those swimmers who are going to hit the Automatic Qualifying marks are going to be in the top X number of swimmers that wind up getting invited based on the NCAA’s selection method, and the entire country knows that just hitting a B standard isn’t going to get them close to an NCAA invite.

These individual standards are useful for two important reasons, at least at the Division I level: one is so that schools can tout their accomplishments of hitting “consideration” and “automatic” standards to those who don’t understand the above; and the other is to keep sort of a barometer for how much faster the NCAA is getting.

As previously mentioned, NCAA women’s distance swimming is getting faster and faster and faster, and the standards reflect that. Three times in three seasons, the NCAA Record in that has been broken (by Stephanie Peacock in 2011 and 2012, by Brittany MacLean in 2014). That’s after Janet Evans held it for 22 years. This results in the time correction for the “A” standard that we’ve been seeing, and with Katie Ledecky coming for 2016 NCAA’s (she’s already a great deal ahead of the NCAA record before her freshman season).

Some other interesting changes include in the 200 fly, where the time standard got slower in 2014 (despite Tom Shields breaking the NCAA Record the year prior), but has again gotten faster for 2015.

Even with that 200 fly getting faster, the 200 IM “A” standard is now officially faster than the 200 fly “A” standard. That’s really just of academic interest, but it speaks to a very, very versatile generation of swimmers where the IM can be a focus, not just a byproduct.

The real impactful changes come not in the individual standards, rather they come in RELAY standards changing. That’s because relay standards can swing NCAA qualifications wildly. The simple version of qualification for relays is that you must have a relay hit a “Qualification Standard” to have any relays swim at NCAA’s. Once you get a relay in, you can then also swim any relays for which you have a provisional standard.

Unlike the individual events, relays don’t have any sort of a ranking system to determine qualification. Hit the standards, or stay home. That’s as compared to the individual standards, where if you retrofitted this year’s standards to last year’s NCAA Championship meet, they probably wouldn’t have any actual different on the outcome.

Note: this is basically a retro-fitting of the 2015 standards to 2014 results. Standards don’t exist in a bubble – teams could have taken another shot to improve their time to hit a standard at a time trial, last chance meet, etc. The purpose is to show the impact, not rewrite history.

And last, but not least, below are the exact amount that each standard has changed by since 2014. Want to see a clean version of the 2015 standards? Click here.

Time Standard changes, not big rules changes, but yes something like that.

The practical effect of toughened “A” times, plus the incredible depth we’ve seen will mean that all but about 15-20 swimmers will have to peak for their conference championship meet or hit a peak time in very early season (perhaps on the first possible date by carryover from summer taper).

Off topic, but the photo above shows 21 Cal swimmers (no divers) at NCAAs. I thought that 18 was a hard cap for swimmers. Are teams allowed to bring alternates in case of injury or illness or did the three extra guys just show up and pay their own way?

they paid their own way to be part of the experience and to help out.