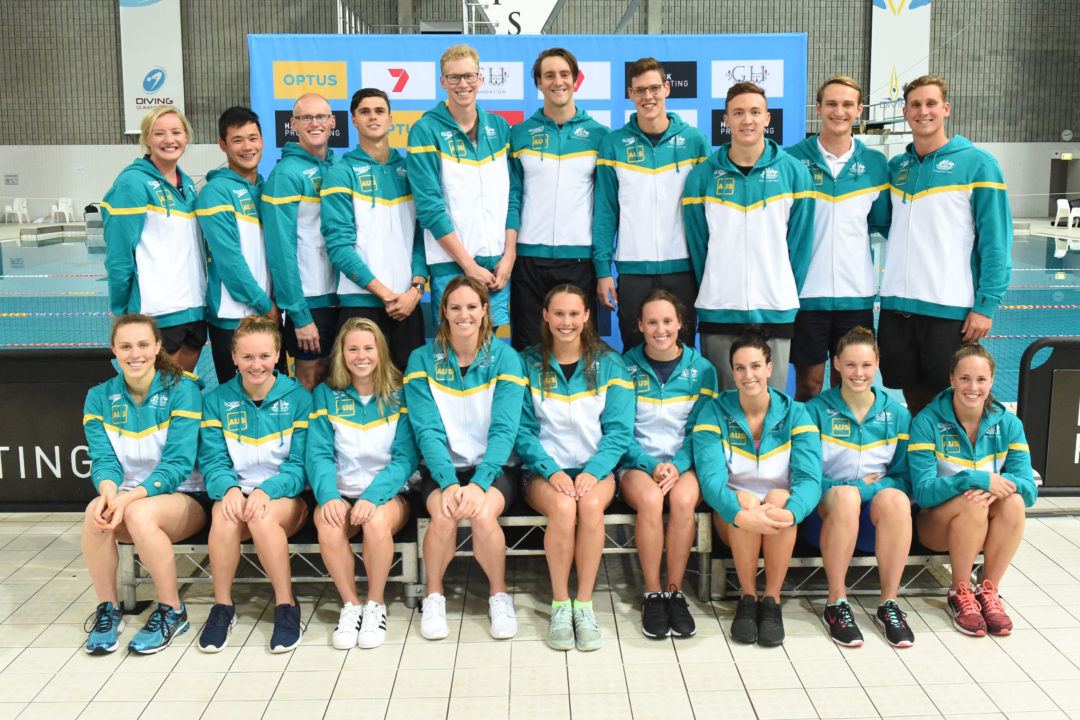 The final night in Brisbane saw one more All Comers Record go down, while a 2016 Olympian was upset in the men's 100m backstroke. Current photo via courtesy of Swimming Australia

The fast and furious 3-day met in Brisbane came to a close tonight, but not before another All Comers Record bit the dust. We saw Cameron McEvoy score a new All Comers Record in the men’s 100m freestyle, followed by Tommy Sucipto and his new mark in the 100m breast, but today it was 22-year-old David Morgan‘s turn.

Competing in the men’s 100m butterfly, Morgan dropped more than 2 seconds from his morning swim of 51.89 to register a monster 49.52 to take the Australian Short Course title. That mark falls just .01 shy of the Australian National Record of 49.51 set by Mitchell Patterson way back in 2009. For Morgan, this outing represents his 2nd individual gold medal of these championships, as the TSS Aquatics athlete already collected the win in the 200m butterfly race earlier in the meet.

17-year-old Matthew Wilson successfully defended his 200m breaststroke short course title tonight, stopping the clock at a swift 2:05.08 for the win. He scored the only time beneath the 2:06-threshold and his outing tonight sits well over a second faster than his winning time of 2:06.50 from last year. The Australian qualifying time for Short Course World Championships is listed at 2:05.01, therefore, Wilson fell just .07 of a second shy of the standard needed to travel to Windsor.

After earning two bronze medals so far at this championships, 22-year-old 2016 Olympian Madison Wilson reaped a win in the women’s 200m freestyle tonight. With Australia’s 2016 Olympic bronze medalist in the LCM version of this event, Emma McKeon, still on an post-Olympics break, Wilson took advantage of the open door to take the title, splitting 55.04/59.86 to stop the clock in a time of 1:54.87, the only competitor of the field to touch under the 1:55 threshold. That marks a personal best for the St. Peters and Western swimmer, although the time is just .07 over the Australian qualifying time for SC Worlds set at 1:54.80.

As he did at the Australian Long Course National Championships in April of this year, Bond swimmer Cameron McEvoy successfully completed his treble of titles by clinching the win in the men’s 50m freestyle tonight. His time of 21.04 beat out a stacked field which included 100m fly winner David Morgan and 2016 Olympian James Roberts. McEvoy’s mark was the only time of the field to dip under the 21.20 qualifying standard for Windsor.

In a gutsy swim, 28-year-old Bobby Hurley surprised double World Champion and 2016 Olympic silver medalist Mitch Larkin by snatching up the title in the men’s 100m backstroke tonight. What makes his winning time of 50.08 even more eye-opening is that Hurley was forced to almost entirely kick his 50m backstroke race earlier in the meet having been diagnosed with brachial neuritis, an infection in the suprascapular nerve that runs from neck to shoulder.

Larkin did settle for silver, however, also scoring a SC World Championship-qualifying time of 50.42 in the process.