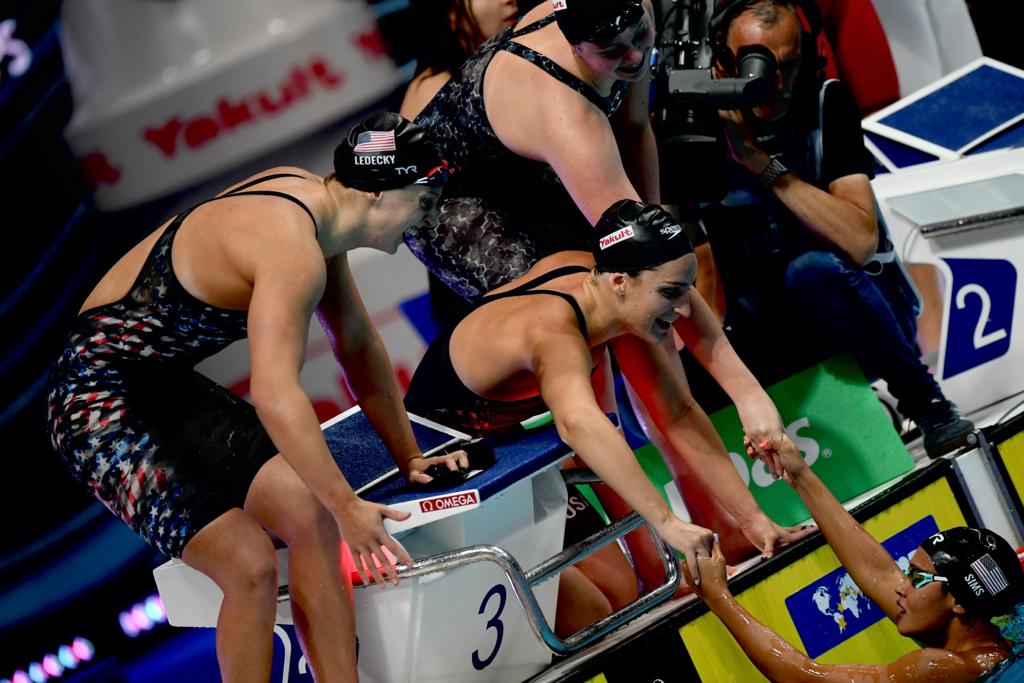 In our women's 4x200 free relay preview, we picked the U.S. to finish fourth. However, they ended up beating the field by 2.41 seconds to take gold tonight. Current photo via Fabio Cetti

In our women’s 4×200 free relay preview, we picked the United States to finish fourth. At their trials meet, Katie Ledecky was the only swimmer to go sub-1:57 in the 200 free, and the possibility that Americans could compete with the likes of Canada, China, and Australia for the medals seemed very unlikely. There was even discussion about how Meg Harris, the eighth place finisher in the 200 free at Australian trials (1:56.82), was faster than Claire Weinstein, the second-place finisher at U.S. trials (1:57.08), showing how weak we thought the U.S. was in terms of 200 freestyle depth at that point.

But on race day, it was the United States that held off Australia, China, and Canada to win this relay by 2.41 seconds in a championship record time of 7:41.45, beating out Australia’s old championship record of 7:41.50 from back in 2019. That stands as the fourth-fastest women’s 4×200 free performance in history, just behind the showings of China, the United States, and Australia at the Tokyo Olympic Games. And the Americans did this in spite of missing Paige Madden, Katie McLaughlin, and Allison Schmitt, who were key members on their relay last year.

The United States led off with Claire Weinstein, who was picked for finals despite recording the slowest split out of any of the Americans on the prelims relay. The 15-year-old proved that the U.S. coaches made the right decision in selecting her by leading off in a best time of 1:56.71. They were trailing Canada by nearly two seconds then due to Canadian Summer McIntosh‘s massive 1:54.71 leadoff leg, but Weinstein was still fast enough to get the job done for her team. Next, things were handed off to veteran Leah Smith, who split a 1:56.47. At that point, the Americans were bumped down to third and were trailing both Canada and Australia, but they were still well in the race.

Things began to finally shift in the Americans’ favor when Katie Ledecky dove in the water. She recorded a monster split of 1:53.67, and by the end of her leg, the U.S. went from being in third to leading by over a second ahead of Australia. Ledecky went the fastest that she’s ever been on this relay, and her split ranks as the third-fastest 4×200 free relay split of all time, just trailing Federica Pellegrini and Sarah Sjostrom‘s performances.

But the Americans weren’t done yet. After Ledecky gave the Americans a huge lead, 17-year-old Bella Sims helped extend it with a massive 1:54.60 anchor leg to secure victory for her team. Something worth noting is that even though Sims didn’t qualify to swim the 200 free individually at these World Championships, she held off Penny Oleksiak, Mollie O’Callaghan, and Yang Junxuan (who came home faster than Sims in 1:54.18, but was too far behind to be in contention for an upset), three swimmers that did swim the individual 200 free event. In one day, Sims’ improvement trajectory in the 200 free has been massive. She came into the meet with a best time of 1:57.53 on a flat start, and then earned herself a second swim by splitting 1:55.91 in prelims before going over a second faster in finals. If Sims can maintain her relay speed in individual swims, she could putting herself in the conversation as one of the world’s best 200 freestylers in the future.

Critics can say that the Americans only won in a weakened field, as Australia was missing their best 200 freestylers in Emma McKeon and Ariarne Titmus, and Olympic champions China were plagued by COVID-19 restrictions coming into Worlds. But now that we know what the U.S. is truly capable of, the next four-team battle between China, Australia, Canada, and the U.S. is going to be one for the ages for years to come.

Ledecky and sims 1:54 and 1:53 are huge confident booster going into next year and Paris, the American women need 1 more mid 1:55 split to go with Weinstein, ledecky and sims not sure what the future holds for smith, McLaughlin, madden and Schmitt

Awesome relay for the Americans! Great to see the veterans share duties with the rookies and defy expectations. Bella is a beast, but this one belongs to Katie, who inspires and lifts everyone around her. She’s such a gift to the world of swimming. Something that seems lost in the all-time WC medal tally is her massive lead in golds—18, with Natalie next closest with 8. That’s pretty mind boggling when you think about it. No one has ever come close to her reign of domination.

Nearly ten years to the date:

“When you’re 15 years old, you don’t really look at splits. You don’t listen to what the so-called experts say. You just go out there and race. Sometimes, that’s the best strategy you can have. Just go out, feel it, and make it happen.”

Imagine taking over from Ledecky, as a teenager, with the lead, in a race you’re an underdog in, and dropping a split 3 seconds better than your PB. That’s grit!!!!!

I keep coming back to this. One of the swims of the meet tbh, USA tends to step up like they did in Tokyo, but Madden and McLaughlin had 1:55s in them from the start, in this case, suddedly, Bella Sims says hold my drink while I provide the necessary 1:54, PB is 1:57 but times are out the door when it comes to this relay and team USA

I can say, with quite a bit of certainty, that Coach Ron Aitken is the best former UNLV Breaststroke swimmer to ever coach in the sport of swimming!

Finally my dream come true: American team got 2 under 1:55 swimmers in one race. That had never been before even having Schmitt’s, Franklin’s and Ledecky’s careers overlapped.
With that when first overwhelming emotions about win settled down there is no more surprise about this relay outcome. That was the highest quality performance and for other teams it’s not enough to be simply strong to beat this American team. They have to bring everything they have and swim to their limits.
The only real surprise was of course the jump to 1:54.60 (relay)from 1:57.71 flat start shown less than two months ago by Bella Sims. Let’s wish her to be consistent with that.