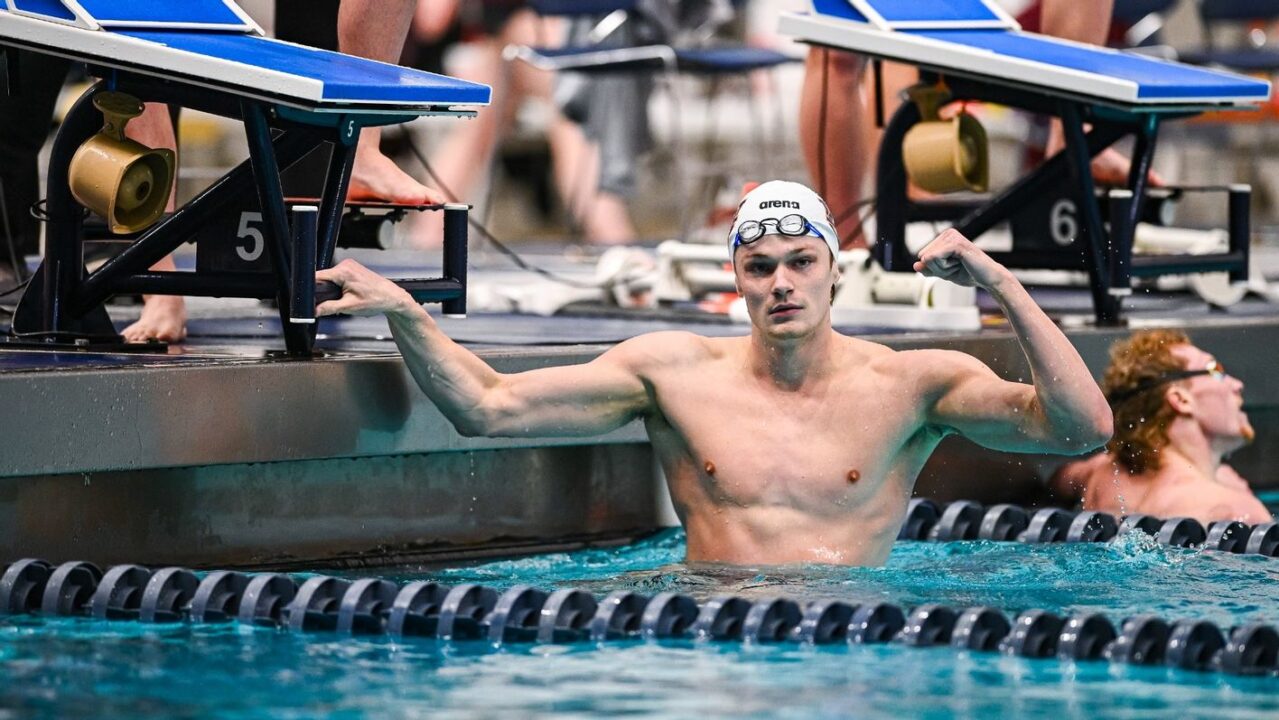 Auburn hosted Texas A&M on Wednesday, January 4 for the first SEC dual meet of 2023. The Tiger men overcame the Aggies in the men’s meet, marking a huge program win against a tough opponent. SwimSwam currently has Texas A&M ranked 11th in our Power Rankings, while Auburn is ranked 15th.

If we were just looking at the rosters and what these teams had done up to this point in the season, we would have given a slight edge to Texas A&M in this meet. That being said, Auburn swam exceptionally well, using depth to get the job done, even overcoming a diving deficit.

To quickly go over the diving results, the Aggies outscored the Tigers 21-17. In 1-meter, Texas A&M went 1-2, with Allen Bottego winning with a score of 373.28, just ahead of teammate Victor Povzner (369.15). Auburn took 3-meter, with Conner Pruitt racking up 408.83 points to win the event decisively.

In the pool, the Tigers got off to an electric start, winning the 200 medley relay by well over a second. Aidan Stoffle led off in a speedy 21.97 and was followed by Reid Mikuta in 24.31 for a 46.28 on the first 100, which was a second faster than Texas A&M. Nate Stoffle then posted a 20.73 on fly for Auburn and Kalle Makinen anchored in 19.76, getting the Tigers into the wall in a final time of 1:26.77. Incredibly, the Stoffle brothers and Mikuta each posted the fastest split in the field in their respective strokes. Makinen’s 19.76 anchor split was the second-fastest in the field, but it wasn’t Texas A&M’s anchor who was faster, it was Auburn ‘B’ relay anchor Mihalis Deliyiannis anchoring his relay in 19.69 to lead the freestylers in the event.

The Tigers also had a great showing in the 50 free, where Mihalis Deliyiannis touched first in 20.16, just ahead of Auburn teammate Kalle Makinen (20.26). Auburn made it a sweep of the sprint free events, as Christian Sztolcman won the 100 free in 44.16. Sztolcman was impressive on the back half of the race, coming home in 44.16.

Pivoting to the Aggies, Baylor Nelson was absolutely on fire, winning three individual events. Nelson kicked off his day by winning the 200 free in 1:36.91. He swam a fantastic race, splitting 48.00 on the first 100 then coming home in 48.91.

A&M also got a win in the 200 breast, where Andres Puente Bustamante was dominant, swimming a 1:58.77 to finish first by well over two seconds.

Did TAMU really have a chance?

Kudos to Auburn; I was there & they swam well but the 400 IM wasn’t swam in this meet for good reasons. A&M would have placed 1st, 2nd, 3rd, & possibly 4th in that event (sweeping all the points). Check out our 400 IM swimmers versus their IM swimmers if you have doubts! Auburn knew what event to leave out of the meet… but that’s OK. Still might have not been enough to get us the win! SEC’s are at our place & that is where it’s ALL gonna mean something👍👍. Gig em forever!

Go ahead and make it about yourself

Read my ENTIRE comment! I said that swimming that event still might not have gotten us the win (probably not but the final score would have been a lot closer)!!

4IM is rarely swam at dual meets and both teams agree to the event lineup. Not like Auburn purposely omitted the 4IM with no say for A&M

Since you know so much, why isn’t it? It’s swam at SEC’s. Would think a bit more experience swimming it would help all involved!