Howard Sets Out to Host Biggest HBCU Swim Meet in History vs. Georgetown 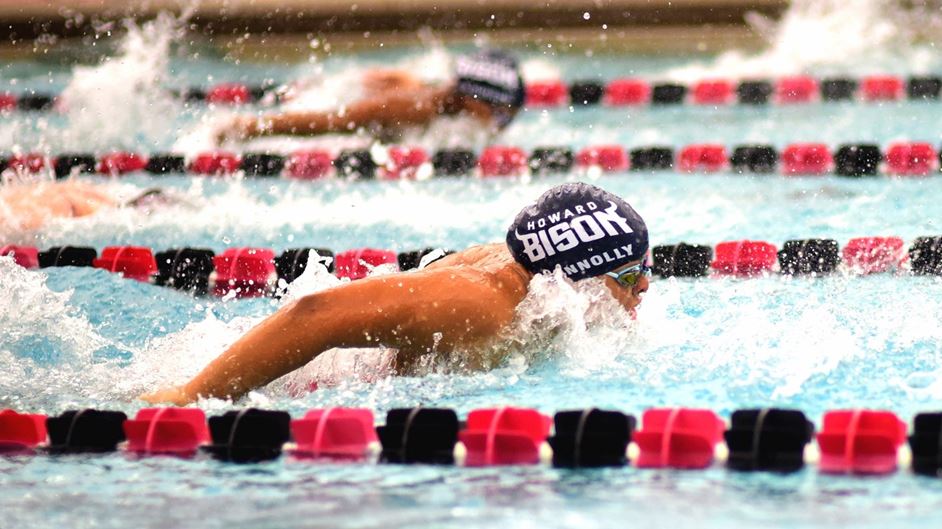 Dubbed the “Battle at The Burr,” the event will be decked out with DJs, dance troupes, Howard’s marching band, food vendors, and plenty of overflow seating. Archive photo via Mark Coleman

The biggest swimming event in HBCU history is coming to Howard University on Oct. 1.

One day after ninth-year Howard head coach Nicholas Askew will be inducted into the school’s Athletic Hall of Fame on Sept. 30, the Bison will host crosstown rival Georgetown for their first dual meet of the season.

Dubbed the “Battle at The Burr,” the Saturday afternoon event will be decked out with DJs, dance troupes, Howard’s marching band, food vendors, and overflow seating in the splash zone and basketball gym, where fans can view a broadcast with special-guest commentary from someone Askew teased as “easily recognizable by their hardware of Olympic medals.” Various performances will take place during the usual breaks in the action.

Typically, the Bison draw about 500 fans for meets at Burr Gym Pool, but they’re expecting upwards of 2,000 in attendance for next month’s Battle at The Burr. Not only will they get a boost from alumni and supporters who will already be in town for the Athletic Hall of Fame festivities, but Howard’s swim team is also the only show on campus that weekend.

“This will be the biggest, most-attended HBCU event in history for swimming and diving,” said Askew, a 2000 graduate of Howard who was a member of the Bison swim and tennis teams. “It’s arguably going to be one of the largest-attended events in swimming and diving for a regular-season event. We know that some other institutions have larger seating capacities and have some pretty significant rivalries, but we’re going to be right up there in that top echelon of attendance.”

“The big effort is fundraising,” he added. “Swimming is the No. 1 cut program in all of NCAA. We want to make sure we’re doing our part in creating such fanfare that people will feel good about supporting the program financially so we can take some of the burden off the athletic department.”

In 2016, Howard became the last remaining HBCU school with a swim program after North Carolina A&T disbanded its team.

“Our environment is different than any other college environment on the planet,” Askew said. “I can’t speak enough to the electricity that’s in this environment and how special it is given the fact that we’re the only HBCU and how the numbers do not favor the culture. Such a large number of Black or brown people don’t swim or have limited swimming ability. To be able to pack the stands — to have them there the entire time for a swim meet cheering loudly and engaged in the fan experience — you’re not going to find anywhere else like it.”

When Georgetown visited Howard last October, the atmosphere at the meet left quite the impression on Hoyas supporters. Some parents called it their favorite crowd experience ever. Georgetown’s men and women teams escaped with victories, but the men’s side was decided by the final two events in a thrilling finish.

“We’re trying to create a really fan-friendly environment for a dual meet,” said Leavitt, whose men’s team won its first Big East title last season. “We want it to be enticing for a swim parent, but also just an average fan who might’ve never watched college swimming before. We’re thrilled to be asked to be a part of this with them. With Howard being the only HBCU with a swim program, we’re trying to highlight them as much as we possibly can and get as much attention on the sport to try to get some more HBCUs to add a swim program.”

“Nic has built his program to a really competitive level,” Leavitt added. “I’m really proud of the work he’s done and I’m really honored to be the team that he chose to swim against in this environment. I’m excited to see who shows up and get some more eyeballs on D.C. swimming.”

“It’s a great time to showcase the program, what we’ve been up to, and start to really generate the excitement of what we’re hopefully going to be able to do moving forward,” Askew said.

Both Howard and Georgetown will open their seasons Sept. 23 at the Potomac Relays hosted by American University, which will also feature George Mason in a showdown of Washington, D.C. schools.

Tickets for the event can be found at www.howarduniversitytickets.com.

I got my VIP ticket for the meet and a ticket for Coach Askew’s induction into the Howard HOF! He’s done such a great job. Congratulations! Go Bison!

This article has a typo. Both Howard and Georgetown will start their seasons at the Potomac Relays hosted by American University, not Howard.

This looks amazing!!! I would stop in just for the energy if I lived in the area. Wishing you surprise wins and nail biter races. What an inspiring coach ❤️❤️❤️

Sounds great. Wish it was televised

Might be on NEC’s streaming network. That’s how most of their meets were streamed last year.

Sounds like it will be a blast. The title made it sound like there would be a few teams.