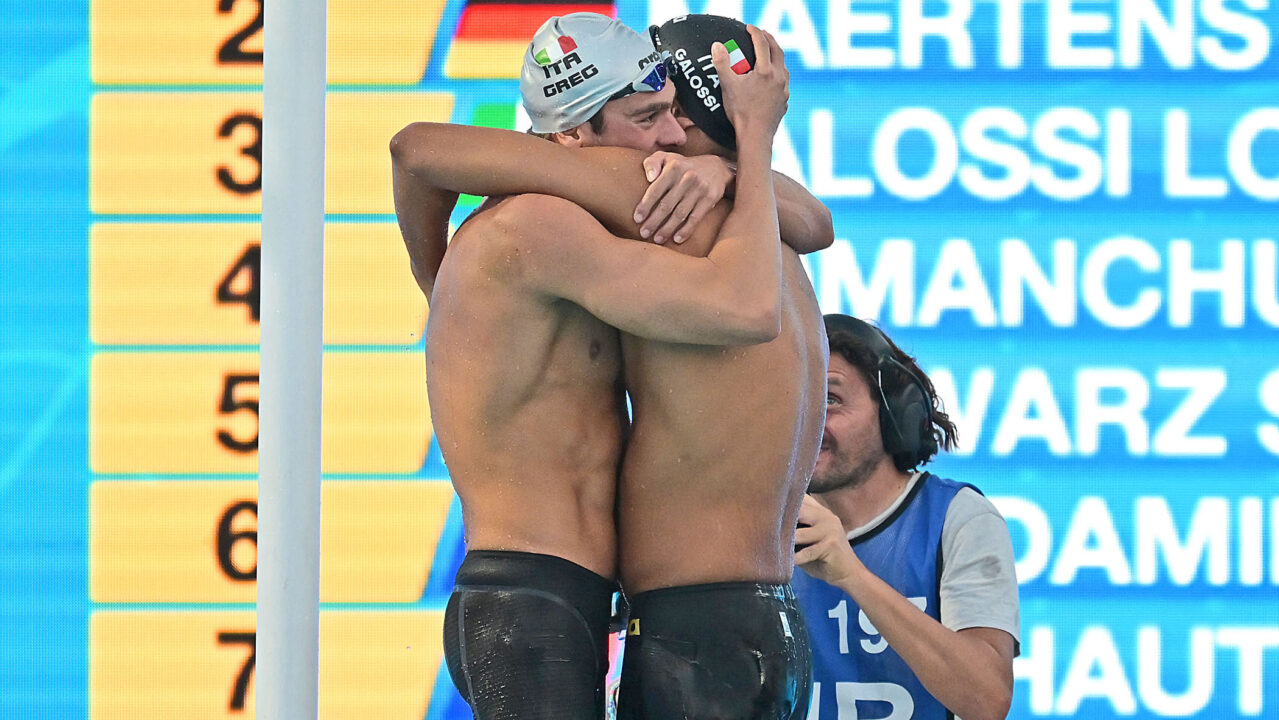 Heading into the finals on day four of these 2022 European Championships, the host nation of Italy owns the top spot in the overall swimming medal table.

Having claimed 14 pieces of hardware, Italy has racked up 7 golds in all, over double that of runners-up the Netherlands. Right now Hungary rounds out the top 3 with 8 medals, including 2 gold, while France and Great Britain are also among the top 5.

Italy also reaped a pair of medals in the men’s 800m free, where Gregorio Paltrinieri clocked a new Championships Record of 7:40.86 as his teammate, Lorenzo Galossi, ripped a new World Junior Record of 7:43.37 to come away with the bronze.

With 17-year-old David Popovici‘s historic 100m free World record, we now have Romania on the board, while Ruta Meilutyte‘s bronze in the women’s 100m breast also put a tally in Lithuania’s column.

Hungary came on strong in the women’s 400m IM, where they took gold and silver, courtesy of Viktoria Milhalyvari-Farkas‘ winning time of 4:37.56 and teammate Zsuzsanna Jakabos’ silver medal-worthy 4:39.79.

Behind Popovici’s 46.86 WR in the 100m free., Hungarian Kristof Milak scored a lifetime best of 47.47 to secure silver for his nation. Alessandro Miressi was right behind in 47.63 for another Italian medal in the form of 100m free bronze.

This table is not totally up to date. Hungary has 2 gold for the males (Milak and 4×200). I am not sure, the Netherlands might have more medals as well…

Sorry, this is day three, not four as I see…

Italy is the European powerhouse in swimming no doubt.

I think with them too and with a complete team from GB.

Marteneghi no doubt would have gotten third with peaty and kamminga at their best….dawson would have been first in the 50 and 100 back…..Great britain would have swept both the men’s and women’s relays but so many would’ve’sss

And Ceccon on the men’s side. And the girls the breastroke. The long distances… etc. Of couse at the moment it’s a big if.

Molly could get a medal of any colour In the 200 breast at her best..Clark could win a medal If she Lowers her British record …we are weak on the men’s backstroke…..the events we are weak at are few at full strength!

With a rested GB this is incorrect. Italy were 3rd in the medal table in 2020. GB are missing gold medal winners in the form of Peaty Dawson Scott and Guy to name a few which would take golds away from Italy with no question. Even the high quality swimmers there are all swimming so tired they are withdrawing left right and centre. No discredit to Italy and their achievements but they are not the only european powerhouse and would probably lose to GB 1vs1 if both tapered.

Russia probably strongest, but their results can’t be trusted at this point so, ignoring them, Italy & GBR would be hard to split. Italy have a more rounded team, but also have some extremely weak areas on the womens side that cripple them in mixed events when faced with up to strength opponents.

On balance I’d say Italy are a stronger entire team, but GBR would probably win more medals at an Olympic Games due to relay strength.