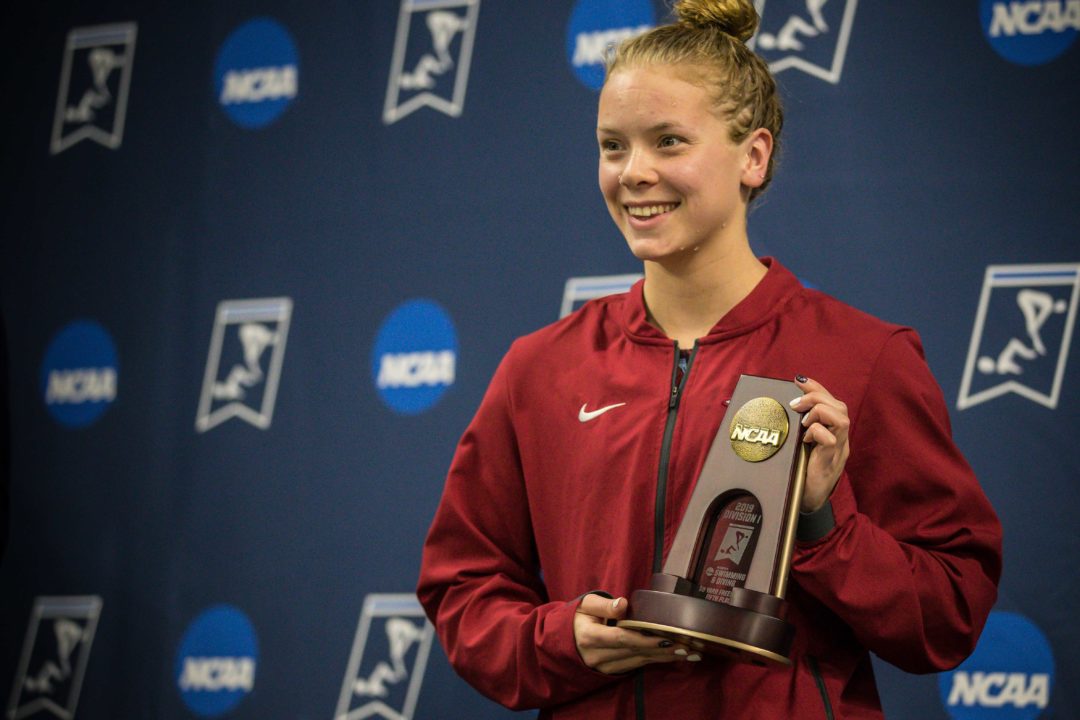 Arkansas senior Anna Hopkin is now the fourth-best performer ever in the 50 free, and her time of 21.19 tonight is the seventh-best performance ever. Archive photo via Jack Spitser/Spitser Photography

Multi-Olympic medalist Kyle Chalmers lowered his own Aussie and Oceanic Records in the men’s SCM 50 freestyle while competing in Kazan tonight.

Japan’s Daiya Seto continues to dominate the IM events at the last two stops of the FINA World Cup circuit, including here on day 1 in Kazan.

Kliment Kolesnikov has joined the FINA World Cup fray in Kazan, set to race the 100 IM on Day 1 against Daiya Seto and Matt Sates.

The country’s decision not to race in Kazan means the absence of Olympic medalists Peaty, Dean, Scott, Anderson, and Dawson.

The swimmers were on fire tonight in Columbia, with several school records going down from multiple programs, new #1 times in the country, and best times abound.

It was Anna Hopkin of Arkansas, though, who yet again out-shone the rest. She’s making her NCAA title run all the more appealing with big swims this fall, and tonight, she swam to a time of 21.19 in the 50 free final. That’s not far off of Abbey Weitzeil‘s NCAA record of 21.02, and she becomes the fourth-best performer of all time in the event. Her swim is also the seventh-best performance ever.

The session was off to an electric start as it was; the Mizzou women kicked their program record with a 1:27.39 in the 200 free relay, anchored by Sarah Thompson‘s 21.26 anchor. They had Haley Hynes lead off in 22.04, followed by nearly identical times from Megan Keil (22.04) and freshman Amy Feddersen (22.05). Their effort moves them up to the #1 time in the country. Arkansas smashed their school record with a 1:28.39 for second place, keying on a lights-out 20.89 split from Hopkin – read more about that swim here.

Mizzou’s Thompson, a junior, is having the best season of her life. She was second in the 50 free behind Hopkin with a 21.53, docking over two-tenths from the Mizzou record of 21.79 by Shara Stafford in 2012. Thompson had never broken 22 seconds in this event until this morning’s 21.81, and now she has a time that would’ve made the 50 free A final at NCAAs last season, where she was 29th in prelims (22.36) and didn’t make finals.

Mizzou has been suiting up all season long, and they’re still producing great swims at this mid-season invite. Head Coach Andy Grevers says they aren’t as rested as much as they traditionally are at this meet.

“We’re a little bit less rested than we’ve traditionally been at this meet, and that’s by design. I believe we have the skills and talents to get the objectives done on a little bit less rest, and we’re seeing that already happen today. We have people just implementing their races, not trying to do anything superhuman, simply doing what they know. I’m thrilled about the three new school records today and really think we’re set up for a great meet. We just have to stick to our Zou Style and pick up where we left off tomorrow morning.”

Arkansas junior Peyton Palsha became the first Razorback to break 4:40 in the 500 free, clocking a 4:38.86 to dominate the event. The closest competitor behind her was Nebraska’s Autumn Haebig (4:44.03). Palsha’s time tonight was two seconds clear of what made NCAAs last season, and it also would’ve gotten her into the B final at NCAAs had she hit the same time in the 500 free prelims there. She now ranks second in the country behind only Virginia’s Paige Madden (4:38.67).

Mizzou needs Kovac on that free leg, I think.

She’ll be under that barrier come March!

I pity the wall she finishes at.

Best mid season time of all time. It’s crazy how fast this woman is. Admittedly I am not as good at following Swimming outside the us but I can’t believe I had t heard of her before she committed.
Way to go!