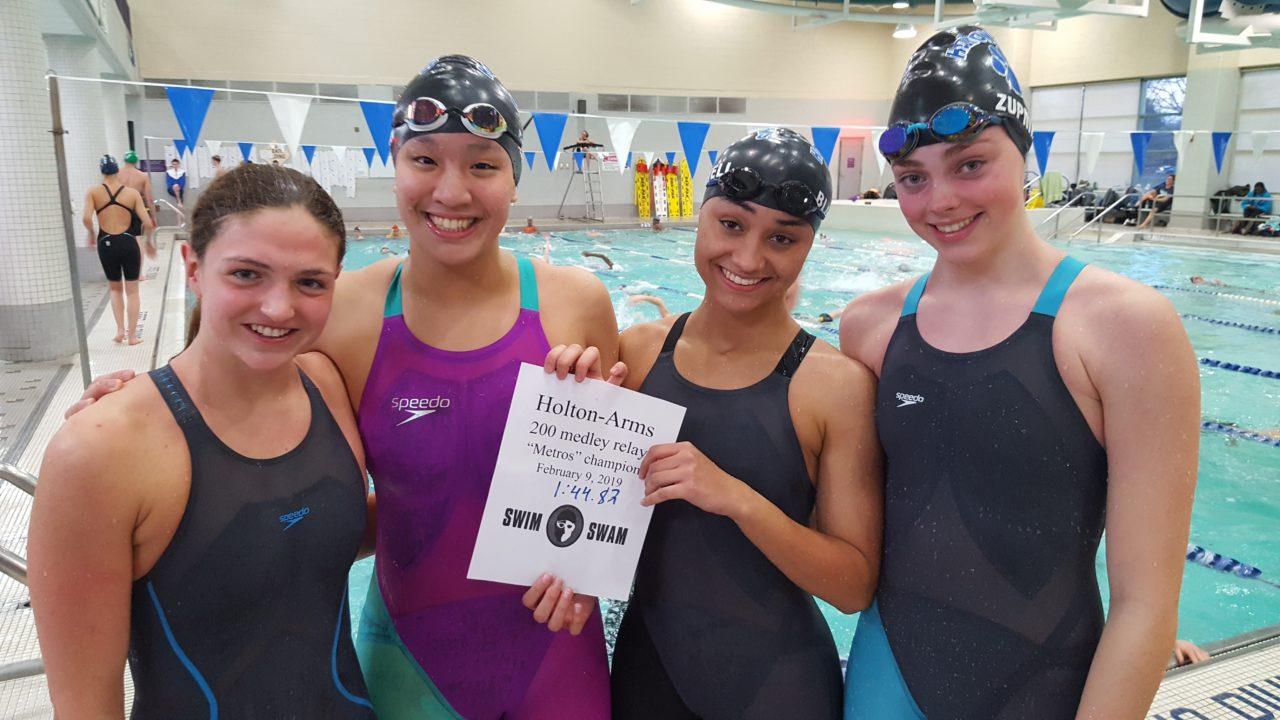 Much of the Washington region’s deep talent pool was out in force, and they did not disappoint Current photo via Matthew Rees

There are two defining features of the Washington Metropolitan Interscholastic Swimming Championship (better known as “Metros”). The first is the volume. Balcony-style seating on three sides of the pool blends with boisterous members of each team perching themselves inches from the water, where they bellow at the top of their lungs for their teammates to finesse themselves through the water FASTER!!!

The resulting cacophony surely contributes to the other defining feature of Metros: velocity. It is routinely one of the nation’s fastest high school meets. On one magical night in 2013, four national high school records were taken down (two by Jack Conger and two by Katie Ledecky). And while no national standards fell at this year’s event, held Saturday night, much of the Washington region’s deep talent pool was out in force and they did not disappoint.

The night’s first two events set the tone for the rest of the meet. Georgetown Prep won the boys 200 medley relay (1:33.27), with a squad of two sophomores (Brett Feyerick and Dylan Danaie) and two juniors (Ryan Mathis and Luke Addington). Feyerick’s sizzling 22.8 backstroke leg gave the Little Hoyas a comfortable lead they never relinquished. And they narrowly won the team title over second-place Churchill, 356-347.

On the girls’ side, the Holton-Arms 200 medley won by more than two seconds, powered by a senior (Jing-E Tan) and three juniors (Rachel Blackwell, Jillian Johnson, and Tatum Zupnik). Holton’s depth was no contest for the other schools — they clawed their way to a very comfortable victory over second-place Bethesda-Chevy Chase, 451.5-282.

The meet’s “outstanding performance” award went to Phoebe Bacon, who SwimSwam ranked last year as the sixth-best swimmer in the class of 2020. Bacon, who attends Stone Ridge (Ledecky’s alma mater) is primarily known for her backstroke (she set the meet record as a freshman) and, to a lesser extent, her butterfly (she set the meet record as a sophomore). But on Saturday night she swam the 200 IM in 1:57.31 (see the race here) and the 100 breast in 1:01.46 (see the race here). She won both – the IM in meet-record time, with a 25.08 butterfly leg that would have eclipsed nearly half the swimmers in the women’s “A” and “B” finals at last year’s NCAA championship meet. Her anchor leg in the 400 free relay was a 49 high (see the race here, as the official splits are off). The swim extended Stone Ridge’s lead, which had already been established by teammates Makenzie Higgins, Erika Chen, and Tia Thomas. Their time – 3:25.63 – shredded the meet record set last year by this same quartet. And yes, all four will be back next year.

While Bacon will undoubtedly dominate Metros again next year, one precocious freshman made a powerful statement on Saturday night that she’ll be ready to grab the “outstanding performance” mantle in 2021. Carly Sebring of Damascus won the 50 free (23.17) and the very next event, the 100 fly (53.93).

With Bacon, Sebring, Feyerick, Chen, and Carr returning next year, as well as countless others who swam in the “A” finals, Metros is not going to lose any of its speed. In fact, it’s likely to get even faster, as Erin Gemmell– currently in 8thgrade at Stone Ridge – will most likely be entered in the meet. She’s alreadynotched a time that would have wonan event at Metros – and in two others she’s just a few tenths away. Buckle up for many more years of blinding speed. And bring your earplugs.

Bacon split a 49 mid anchoring the 400 Free Relay in a come from behind win at the National Catholic Championship Meet at Loyola Maryland in January. She was suited up and racing to help her team take the overall title of the meet. She is FAST, but find it more realistic her split at this meet was 49, and not 47 if the touch pads were acting up, especially after going back to back from the 100 breaststroke.

“She won both – the IM in meet-record time, with a 25.08 backstroke leg that would have eclipsed nearly half the swimmers in the women’s “A” and “B” finals at last year’s NCAA championship meet.”

this should be butterfly not backstroke

I was there, and it was a soft touch. I believe the real split was 49 or something? Still really fast. A similar thing happened in the Boys 4×100 relay, where a swimmer who really went a 45 or 46 was registered as a 44, and their 1st 50 split was registered as a 19. (The splits would have been 19/24, which seems unlikely).

In the video Bacon is around a 49.5 and the boys swimmer you are referring to is about a 46 mid to low

definite error. the girl swimming third went a 53.33 in prelims of the 100 free and then supposedly split 55.0 on that relay according to the results.

Thanks all! Spoke with Matt, and updated the post.