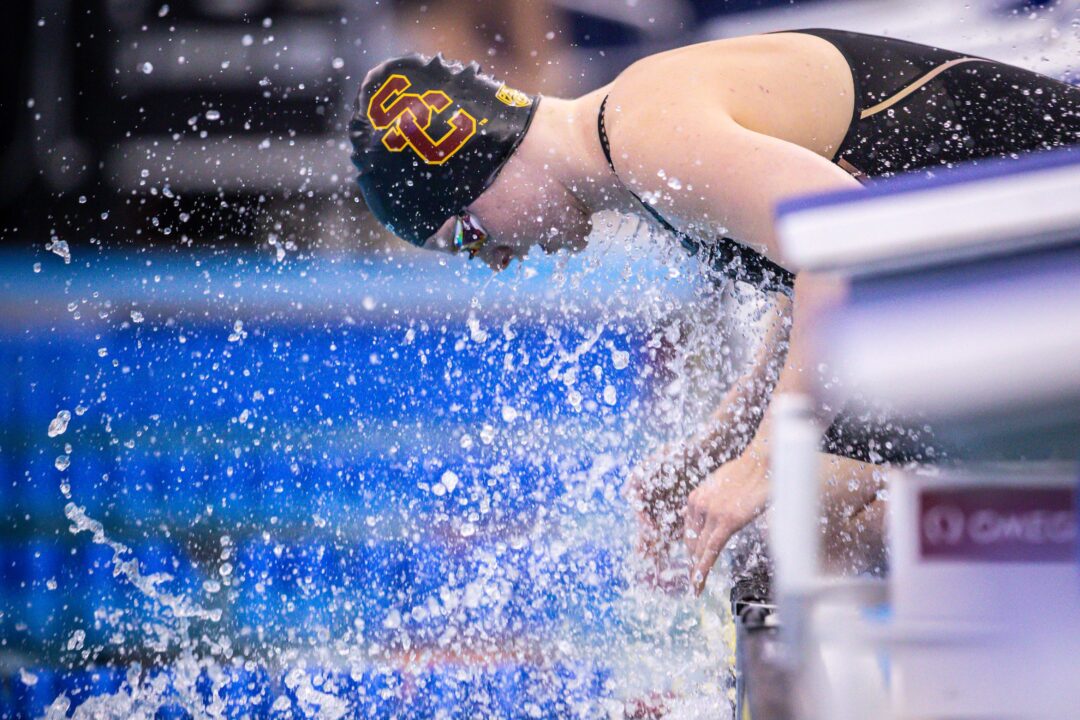 Reigning NCAA Champ Kaitlyn Dobler (above) clocked a nation-leading time of 56.94 in the 100 breast, only 0.01 off her personal best from March. Archive photo via Jack Spitser/Spitser Photography

After splitting a 49.10 on last night’s 400 medley relay, MacNeil came back tonight to put up another historic split, this time in the 50 fly.  She knocks off Gretchen Walsh’s unsuited 21.91 done in late October at the Virginia vs. Florida dual meet. MacNeil’s previous best 50 fly split was 22.29, which was done at the 2019 Big Ten Championships.

Later in the session, MacNeil won the 100 fly with a time of 49.40. She is the all-time top performer in the event with her best time of 48.89 from the 2021. This swim is her fourth-fastest ever, and ranks her first in the NCAA for this season so far.

Nelson now holds the top spot in the country in both IM events, as this swim edges him under Carson Foster‘s 3:38.79 from the SMU Classic. The question is whether or not his times will survive the many invites still to come.

Improving on his already impressive swim this morning, Alabama’s Charlie Hawke found a few more tenths to drop tonight to win the event in a 1:31.92. The improvement came from his first 100, as he took it out over a second faster than he did this morning.

Air Force’s Wen Zhang also broke 1:32.0 for the first time, and nearly caught Hawke, as he out-split him by a tenth in the final 50. Zhang breaks his own Air Force Academy school record of 1:32.21 and is now second in the NCAA this year behind Hawke.

Reigning National Champion Kaitlyn Dobler obliterated the field in the 100 breaststroke, beating Alabama’s Avery Wiseman by over three seconds to go a 56.94. The swim was only one one-hundredth off her personal best of 56.93, which she set when she won the 100 breast at NCAAs this past season.

She improves on her season best of 57.83 from the Trojan Invite to hang on to the top spot in the country this year.

Nothing close. Hawke is a relatively-common surname in Australia. Estimated about 4,000 Hawkes in the country.

I know it is out there but Zhang is a sleeper for ncaa 200 free champ. He still has house and Hobson and others but he is really good.

Wen just came in and annihilated the 200 record at AF. He’s taken 4 full seconds off the previous record before him. The details of his race looked near perfect but I know he’s hungry for more in the last half of his last season in the NCAA.

338 for a freshman is pretty fast