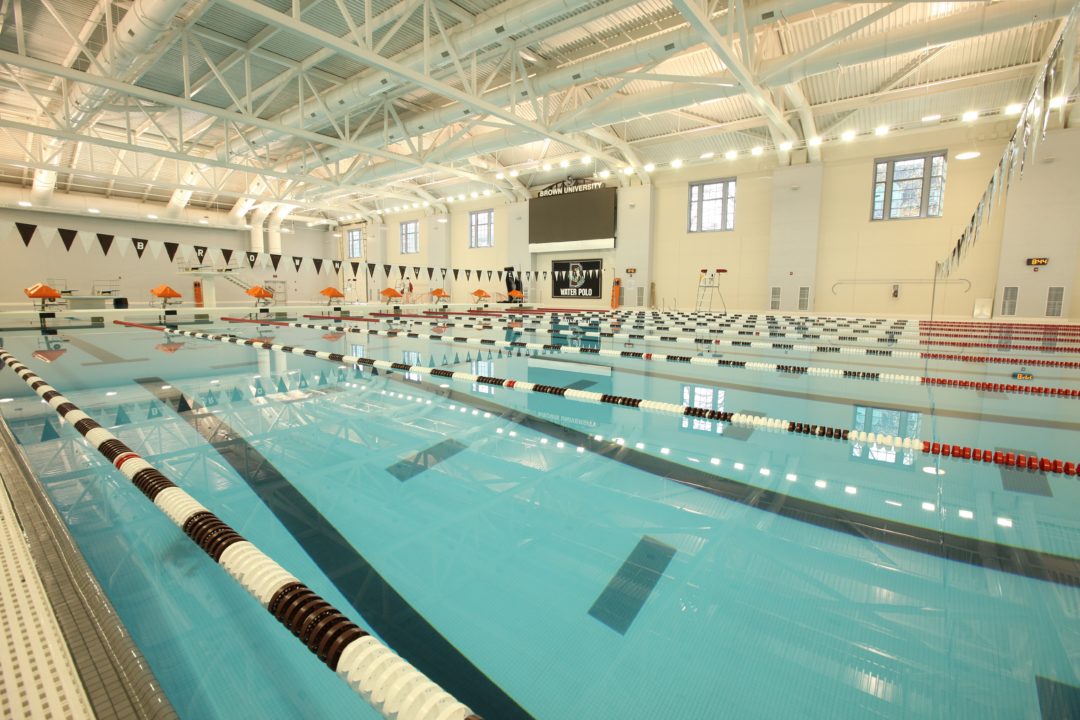 Harvard blew away the field as they took down the Ivy League Meet Record in the 400 medley relay. Princeton, however, took over the team lead on day 3. Archive photo via Brown Athletics

The Princeton women have moved ahead in the team scores after day 3 of the 2020 Ivy League Championships. Princeton freshman Ellie Marquardt is 2-for-2 so far after winning tonight’s 1000 free 9:34.71. She was just a seconds shy of the Ivy League Meet Record, which has stood since 2008, and dropped almost 10 seconds. Penn’s 2019 champion Catherine Buroker broke 9:40 for the first time, taking silver in 9:39.60.

Another freshman impressed in the 400 IM, as Harvard’s Felicia Pasadyn successfully swept the IMs. She knocked 3 seconds off her best to win it in 4:08.47. Pasadyn was dominant, winning by over 5 seconds. Princeton’s freshman Addison Smith (4:14.28) and teammate Regan Barney (4:14.53) rounded out the top 3. Smith came from behind on the back half, taking over a second off her best for silver. Columbia freshman Karen Liu touched 4th in 4:18.07.

Harvard’s Miki Dahlke clipped her best for the first time since 2018 as she won the 100 fly in 51.88. Princeton freshman Christina Bradley broke 53 for the first time to take silver over Brown freshman Sage Matsushima (53.22). Dahlke’s time took down the Pool Record, formerly set by Yale’s Alex Forrester in 2012.

Jaycee Yegher took down another Pool Record for the Crimson with her 59.39 in the 100 breast prelims. She was slightly off that to win the final in 59.76. Columbia’s Helen Wojdylo was also under the former mark as she took silver in 1:00.33. Freshman teammate Addie Rose Bullock won the 100 back, dropping over a second from her best throughout the day with a lifetime best 53.55. Bullock came from behind with a 27.23 on the 2nd 50 to beat Brown’s Taylor Seaman (53.82) and Harvard’s Mei Lynn Colby (53.88). Colby returned to the podium as she was the silver medalist in 2019.

Princeton dominated this morning. It’ll take a lot for Harvard to win tonight.

Felicia Pasadyn is the most rapidly improving swimmer in the nation. Her time drops and fun leadership qualities spell winner!