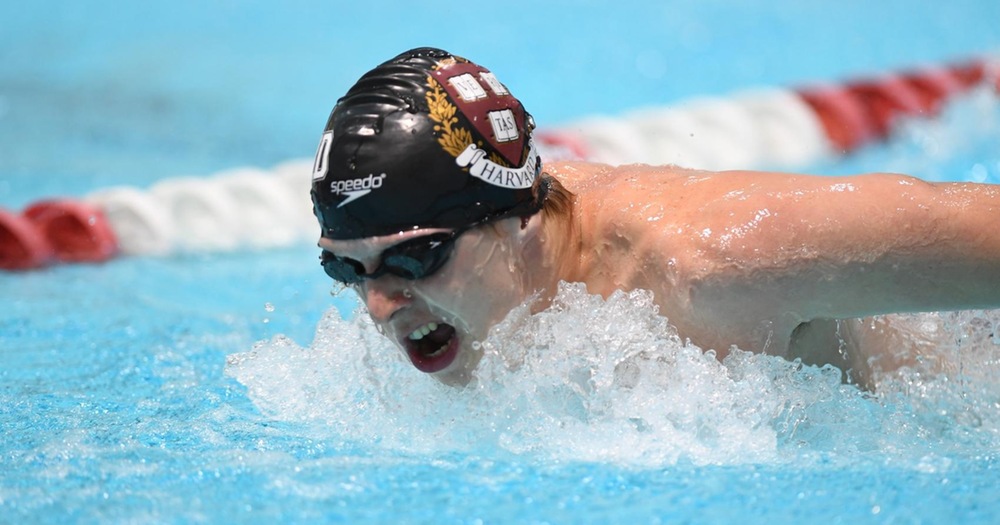 In the water, the Harvard men have been hit hard by graduations and redshirts this season, but they're still the nation-leaders in the classroom. Stock photo via Harvard Athletics

The CSCAA has announced their Scholar All-America Team award winners for the fall 2019 semester, selecting 762 programs from 480 institutions for the award. To be eligible, teams needed to have a minimum of a 3.0 GPA for the semester. 17,685 student-athletes were accounted for by the teams that received this recognition.

23 teams earned recognition for the first time in program history, including the Division I Youngstown State men, who checked in with a 3.47 GPA in their first semester with new head coach Brad Smith in charge – showing immediate dividends from the hire in the classroom.

Head coach is the name listed on the right:

Editor’s note: the Princeton women did not apply for the award in time and so have not been officially awarded the honor for fall 2019, but their verified team GPA for the semester was 3.33, so if they had applied, they would have qualified.

On D3 ranking, intriguing and puzzling why Amherst is not on this list. In fact, it has not been on this list for several years. Among the concensus D3 best liberal arts colleges in the nation — Williams/Amherst/Pomona/Swarthmore (MIT/Cal Tech/JHU/WU not included as they have grad programs), A stands out in a strange way: either swimmers are not achieving good GPAs (which seems unlikely), or they think they are too good for this ranking — which seems a bit snobbish. All the Ivys and most top tier institutions participate in the ranking. Any reason?

My guess is that someone dropped the ball and forgot to submit their paperwork. A few programs do every year, and we get lots of emails from parents of those programs mad at us for not including their teams. But, it’s not our program and not our rules, so nothing we can do about it.

For what it’s worth, if you scroll to the bottom of http://www.gradeinflation.com/ it purports to give average GPA data by school. Unfortunately, most will be out of date by at least 5 years.

Grade inflation or not, are we really trying to say the athletes at Harvard are not smart?? Really?! I was actually rejected by Harvard because of my grades, but Princeton and Brown came hard after me. Go figure.

All admitted athletes at Ivies have to meet a minimum academic index (AI) that is based on high school GPA, class rank, and test scores. Beyond that, there is also an average AI that coaches have to target for each class, which means there’s a little bit of horse trading going on… If you want a faster guy with a lower AI, you may need to also take a slower guy with a higher AI.

But I agree, universally these guys are almost all strong high school students. That said, that’s true across the Ivies, so I think it’s fair to point out that some schools grade more generously than others.

Its a shame people get graded. I says give everyone an A. Talkin about snobbishness just because someone aint smart does that mean they deserve a D??? It is also discrimination which last I checked is against the law. Wake up America!!!

According to a Dean of Undergrad education, Jay M. Harris, the most common grade given out at Harvard is an A and the median grade is an A-. This holds true across the humanities, social sciences, applied sciences, and school of engineering. Must be nice. https://www.thecrimson.com/article/2013/12/5/grade-inflation-divisions-seas/

Let’s be honest that GPA values on their own are pretty meaningless — lots of comments already about grade inflation, but also need to consider the majors and classes taken by the students. Would be interested to see:

1. GPA broken out by department/college (e.g. college of engineering or college of education) and benchmarked against overall student GPAs or non-athlete GPAs within the same academic grouping
2. Whether the coach has team GPA as part of the incentive pay package
3. GPA of credit hours taken in season vs. non-season credit hours
4. GPA of STEM major vs. non-STEM major athletes

If you find a swim team that has a team GPA lower than the university average, then something is very wrong. Hence the 700+ schools on this list.

Are you inferring that an education major is inferior to a STEM major? Students find their strength. Not everyone can be a physician or an engineer. Why does it matter what their major is? Celebrate their successes and move on.

My point around STEM v. non-STEM was that different fields and majors have different requirements, both in terms of topics taken and time, which makes GPAs in dramatically different fields (engineering and education for instance) very hard to compare, hence the point around benchmarking within a college or major. Science majors have tons of labs they need to take. At the university I went to, architecture students essentially lived in the architecture building due to the class requirements. Heck, even education can require practicals and in-service… Read more »

1
-1
Reply
The Importer AND Exporter
Reply to  Qqq

Just imagine what their team GPA will be once Dean comes back.

He’s not in the transfer portal yet?