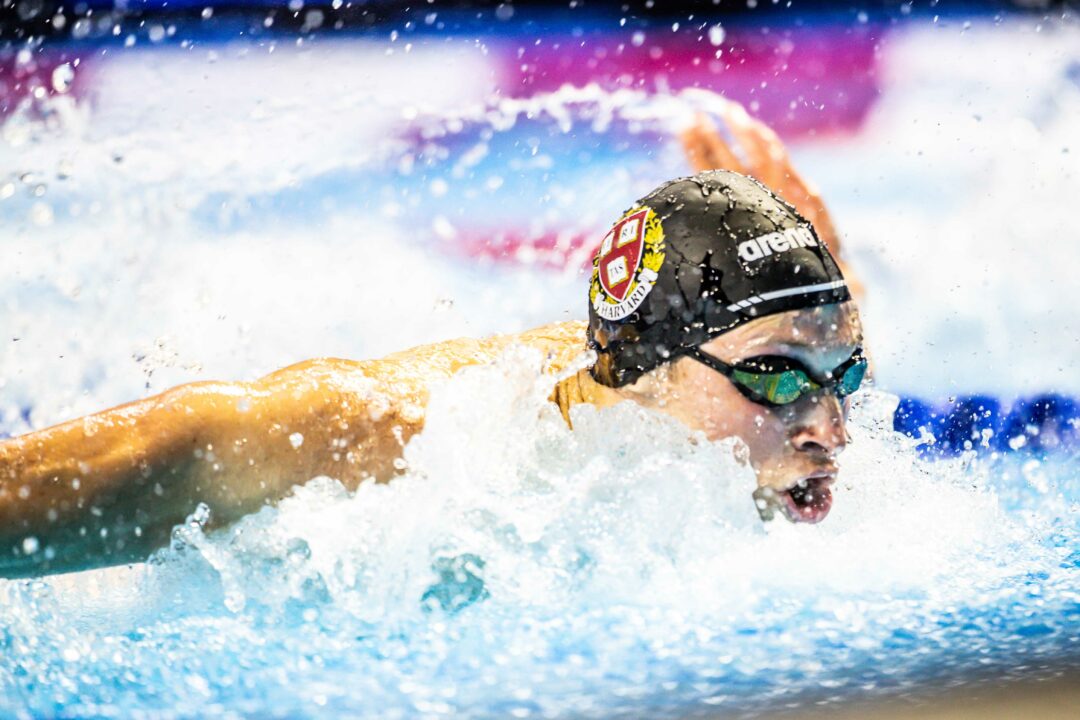 Penn freshman and US National Teamer Matt Fallon will be skipping the USA’s Trials next week due to a conflict with final exams.

Three Harvard swimmers won both of their individual events on the day. Sophomore Noah Brune started his day with a win in the 200 fly, posting a 1:49.48 to touch first. The Mission Viejo, California native turned even with Brown’s Michael Lincoln at the 150, but Brune blasted a 27.34 final 50 to take the win by a second and a half. Brune later returned to win the 500 free in a negative split 4:29.66. Both swims were season bests for the sophomore.

Marcus Holmquist became the third Crimson sophomore to win two events on the day, winning the 200 and 100 freestyle. Holmquist, a native of Sweden, opened up a big lead in the 200 free, flipping at 47.83 at the halfway point and never looked back, touching first in 1:39.02. The Swede later returned to win the 100 free by over half a second, stopping the clock in 45.42. Holmquist’s season best in the 200 free sits at 1:36.71, while his season best in the 100 free is 43.93. Both of those swims came at the Minnesota invitational.

The Crimson also set up a showdown in the 100 fly between their two best swimmers, senior Dean Farris and junior Umitcan Gures. Farris had a blistering first 50 of 22.13 and held off Gures down the stretch, touching in 47.68 to Gures’ 47.78. Farris’ season best sits at 46.17, while Gures currently holds the third fastest time in the NCAA with a 45.15. Both of those swims came in Minnesota last month.

Brown’s lone event win came in the 100 breast, where the Bears completed a 1-2 finish. Senior Ben Hayes, a native of River Hills, Wisconsin, touched first in 57.19. He was followed closely by junior teammate Vincent Huang, who touched in second with a 57.38. Hayes’ season best stands at 56.02, while Huang’s season best is 55.86. Both of those swims came last month at the Bruno Invitational.

Harvard returns to action this Saturday at home versus Penn, while Brown will head to Ithaca, New York on Saturday to take on Cornell.

Dean dong. Guess who? The 🐐