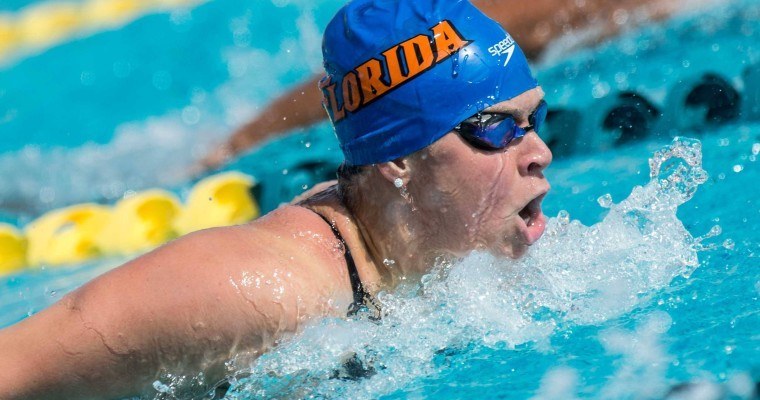 With all due respect to Katie Ledecky's earth-shattering world records, this week's HardCore Swim takes a look at another USA Swimming star who put together an outstanding weekend, and whose swims might be lost in the frenzy of Ledecky's world marks. Archive photo via Mike Lewis/Ola Vista Photography

Elizabeth Beisel is in the midst of her second big transition of her already-storied swimming career. After her first Olympic bid in 2008, Beisel left her home Bluefish club to join the SEC’s Florida Gators for four collegiate seasons. That adjutment didn’t seem to faze the bubbly IMer a bit, as she racked up 18 All-America awards and two national championships, retaining her spot on the Olympic squad in 2012.

Now Beisel is beginning life as a professional swimmer, with a new Speedo contract in hand as of early last week, continuing to train at the University of Florida while representing her old Bluefish stomping grounds in the official heat sheets.

At the Santa Clara Grand Prix, Beisel’s first performance since signing on with Speedo, the 21-year-old couldn’t have repped her new brand any better.

Saturday night’s finals were the high point for Beisel. Heading into the meet, we teased an NCAA rematch between graduated seniors Beisel and Maya DiRado, who touched out Beisel for the national title back in March. That showdown never materialized, as DiRado fell ill early in the weekend and scratched out of her races.

But for Beisel, that wasn’t a license to take it easy. The Gator chomped her way through a field that still boasted some stiff competition (US Olympian Caitlin Leverenz, Open Water national champ Becca Mann and German Olympian Teresa Michalak among others), crushing the heat for a 6-second victory and blazing her way to #4 on the World Ranks for 2014.

Her time of 4:33.52 is just two seconds off the American record, set at the 2008 super-suit Olympic Trials by Katie Hoff. Consider that Beisel is still smack in the middle of Florida’s grueling mid-season training, and the excitement for her end-of-season swim only builds.

Not getting a close race in that event, Beisel came back just two events later to get some racing in. Going up against the dreaded California Backstroking Juggernaut of World Record-holder Missy Franklin and short course American record-holder Liz Pelton, Beisel proved she can run with the best of them. Trailing by a tenth at the 100, Beisel kicked her legs into gear (legs coming off of an all-out 400 IM, mind you) to pass the Golden Bears and take the gold for herself in 2:09.11.

If it seems like Beisel has been around in the international stage forever, it’s because she kind of has – she was 14 when she made her first world championships team, and has been competing for the U.S. for a better part of a decade. But it’s worth remembering that Beisel is still just 21 years old with a tremendous amount of her physical prime still ahead of her.

Is it possible Elizabeth Beisel is only just now hitting her stride? The results of Santa Clara might suggest so. And if that’s the case, then whatever comes next from the versatile Gator might reach a whole new level of HardCore.

It’s definitely possible she’s just hitting her stride, she’s only 21. I’ve been expecting this. By the way, I believe she technically made her first national team at 13. I was there watching her in Irvine when she got 2nd at Nationals in the 2Back and then finished 5th at Pan Pacs a couple weeks later, the day after turning 14. In addition to the smart coaching decision to have her wear a racing suit at Santa Clara at such a pivotal time, I am guessing that the mental aspects of turning pro, graduating from undergrad, and winning a post-grad scholarship all contributed to her performance. Beisel was a top scholar and although she will continue her studies, the added… Read more »

While Beisel’s performance with that double (esp. the 400 IM) is top-notch, I’d still give the overwhelming edge to what Ledecky accomplished. Katie now sits in a place all her own – 7+ second lead over the next fastest 800 time this year, and nearly 24 seconds in the 1500. But for in-season, Beisel surely earns platitudes for the IM. My hunch is that she can take down the 4:31.12 AR of Hoff – the question is whether she can retain her podium places on the full world stage next summer at World Championships or the 2016 Olympics. Her competitors have shown greater improvements over the past few years. Beisel, on the other hand, has shown consistency at 4:31 for… Read more »

I absolutely agree. Ledecky’s swims last weekend are in another stratosphere from anything that’s been done all year, there’s no question. But considering that her swims stirred up plenty of media coverage (and deservedly so!), we decided to use this week’s HardCore Swim to focus on a different set of swims that flew a bit more under the radar.

If you look at the history of Gator postgrads and their transition from short to long course, they really start to hit their stride in elite-level international competition about a year after they cease NCAA competition and can focus exclusively on long course training. It happened this way with Lochte, the Frasers, Dwyer, etc. If the same thing holds true for Beisel, she’s just scratching the surface, and we’ll really see what she can do next year in Kazan.