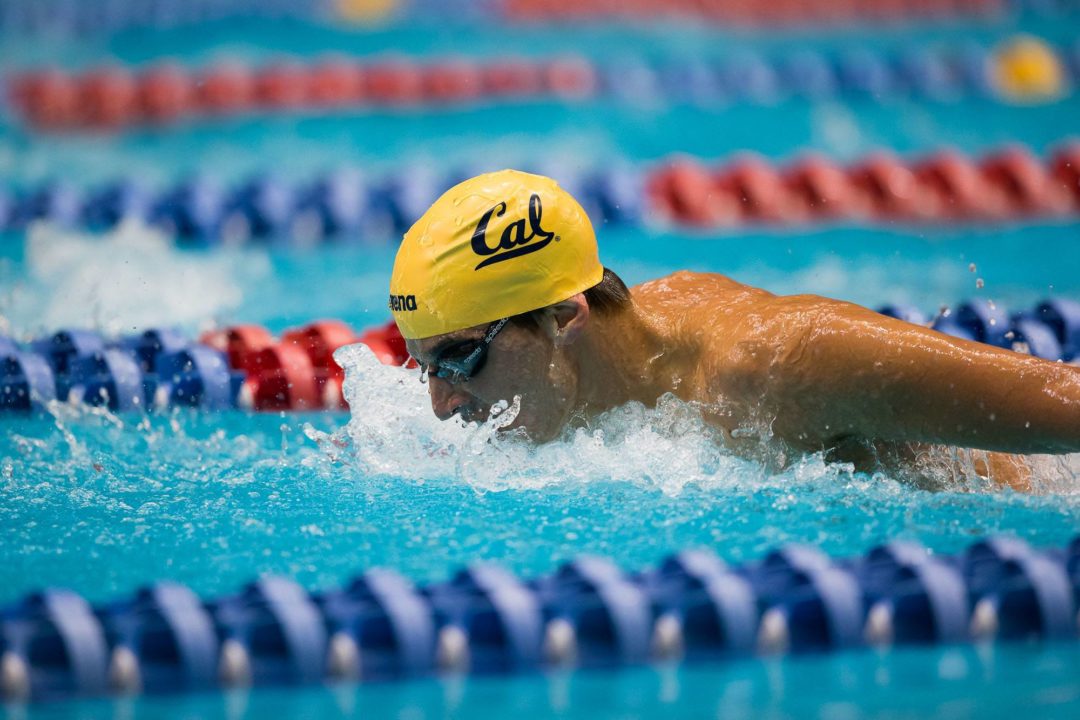 Will Hamilton had a huge season-opening day at the Cal Poly "King and Queen of the Pool" event, winning a tight battle with defending "King of the Pool" Ryan Murphy for the 2014 title. Archive photo via Tim Binning/TheSwimPictures.com

Will Hamilton had a huge season-opening day at the Cal Poly “King and Queen of the Pool” event, winning a tight battle with defending “King of the Pool” Ryan Murphy for the 2014 title.

Meanwhile on the women’ side, sophomore Celina Li won her second title in a row, remaining undefeated at the “Queen of the Pool” meet for her college career.

The format meet combines five different 100-yard races. Each swimmer competes in the 100 fly, 100 back, 100 breast, 100 free and 100 IM, with all five times added up to determine the overall winners.

Murphy, last year’s breakout freshman star who won two NCAA titles, actually dropped well over two seconds from his 2013 winning composite time. But Hamilton, who didn’t compete at this meet last year, was always one small step ahead. Hamilton ended up with a combined time of 4:07.25 to Murphy’s 4:08.62.

Some new faces showed up on the breaststroke, of course, but Hamilton managed a third-place showing in 55.45 to stay in the lead. Chuck Katis, in his second season with the team, was fastest at 54.04, and Josh Prenot was 55.05.

Murphy won the 100 free at 44.2, but still trailed Hamilton by eight tenths, and Hamilton came up with the dagger swim with his 100 IM victory. Murphy was second, a half-second back at 49.64.

Celina Li won her women’s title on pure versatility, never winning a single stroke but also never finishing outside the top 3. Li was the runner-up on butterfly, freestyle and IM to bookend the competition.

Bootsma came back to win the 100 back, a race she won at the 2013 NCAA Championships but fell off in last season. Her time of 54.67 just bettered her teammate Elizabeth Pelton, who went 54.86. Li snuck in for third place at 55.29, profiting from the absence of Golden Bears’ star Missy Franklin, who did not compete in this stroke or the breaststroke.

In the breaststroke, it was Spanish sophomore Marina Garcia who picked up the win, going 1:03.84 to blow away the competition. Freshman Maija Roses out of SwimMAC was second at 1:05.42, and Li once again took bronze with a 1:05.70.

Franklin, who swam the butterfly (55.96) but skipped the back and breast legs, returned to win the 100 free with a 50.27, nearly a second up on the rest of the field. Still, missing those two strokes put her out of the running for the overall crown, which she nearly took from Li last season.

Second in that 100 free was junior Elizabeth Pelton, who stormed back with big swims in the final two events to take second overall. Pelton was 51.02, but Li came in right behind at 51.18 to keep control of the overall lead.

That allowed Li to claim the overall crown for the second year in a row, going 4:42.90 combined, just two tenths faster than she was a year ago. Pelton was second in 4:45.34, which is nearly three seconds faster than her time last season. In an encouraging sign for Cal, most of that drop came breaststroke, where Pelton was about two seconds faster than 2013.

The winners for the host Cal-Poly were junior Alison de Paralta for the women  and Brandon Nguyen and Mickey Mackle, who tied for the men’s crown. De Peralta rode 58s in fly and back to an overall score of 5:03.99. Nguyen and Mackle were both fast in the fly (51.48 for Nguyen, 51.88 for Mackle). Nguyen put up a 58.57 to pull away on breaststroke, but Mackle closed with a 52.56 IM to tie things up at the finish.

What’s up with Batchelor? Why is she no longer on the team?

Don’t quote me, but word is Batchelor’s focusing more on the student part than the athlete part, for now.

This is a proof that college swimming is a joke. Neither Hamilton or Li will ever win a medal in the biggest events in International Swimming. Enjoy your college experience!

Pity Franklin keeps going backwards too. She had held such great promise!

At least we still have Ledecky to hold the torch for USA.

Do you still want to say that “she had held such promise.” I’m pretty sure she’s already successful…

Danjohnrob – betting DOES exist for swimming. Before every World Championship/Olympics, we post the lines from the European sports books.

The odds are laid out on the expectation that the average gambler will overplay on the favorites. One can make out very well if one wagers correctly on a non-favorite even 30-40% of the time.

Rather ironically, this is proof that you guys are jokes. If this is what you define as college swimming, go ahead and bash it all you want. This wasn’t even a dual meet. Also, please don’t call yourselves USA swim fan. Because you guys are pretty disgraceful. Ledecky is a star and not one person doubts her freestyle prowess. But you know what, USA swimming is consisted of more than Ledecky and there are so many other great swimmers trying to represent this country. What have these young swimmers done that deserves your disdain? I wouldn’t mind at all if you didn’t care for college swimmers, but I honestly don’t understand why you have to go out of your way… Read more »

calswimfan – while I don’t agree with most of pol’s comments either, please refrain from making personal attacks against other commenters. It’s a two-way street. As negative as pol’s comments are, they are all pertinent to swimming, and thus fair.

Pol, 99.9% of even the elite swimmers in the entire world will never win a medal in a major international meet, so if that’s your criterion for judging whether a swimming competition is a joke I suggest you only read articles about major events; in fact, you might as well just read the headlines, because that usually tells you who won! I don’t think you understand the point of our sport, because as much as everbody wants their nation to win Olympic /World medals that’s not what makes swimming great for athletes, coaches or fans, and although I don’t speak for SwimSwam, I think it’s clear that the purpose of this website is not simply to tell readers about the… Read more »