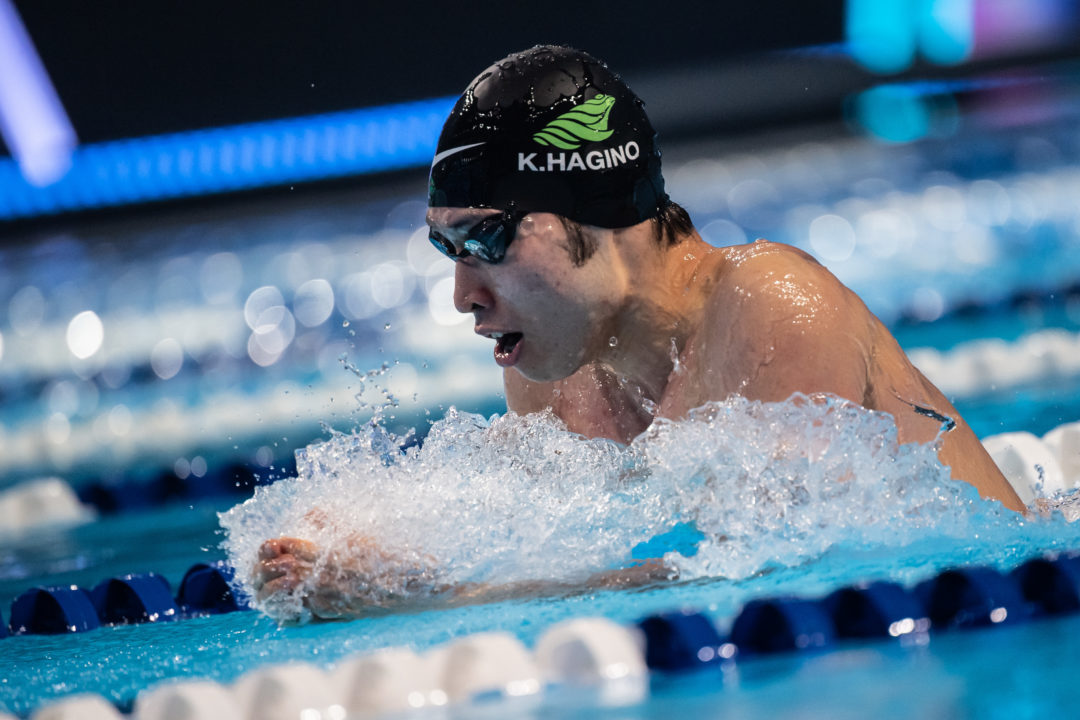 While Kosuke Hagino was racing his way to an undefeated 400 IM record in the ISL, domestic rival Daiya Seto was on the sidelines. They'll meet up next month. Archive photo via Mike Lewis/Ola Vista Photography

Although we’ve seen a sprinkling of Japanese athletes already in action at the Tokyo New Year’s Meet, the Kosuke Kitajima Cup later this month, as well as February’s Japan Open, represent a more robust opportunity for racing among the Japanese elite Olympic hopefuls.

In the latter meet, the Japanese Swimming Federation (JASF) has released its initial list of entries, which preview a thrilling set of matchups akin to what we’ll eventually see at the actual Olympic Trials meet. That sole Olympic qualifying opportunity for Japanese swimmers rests with the Japan Swim, which is slated for April.

As a reminder, two-time gold medalist at the 2019 World Championships, Daiya Seto, has already earned Olympic berths in the 200m IM and 400m IM via those Gwangju performances. However, Seto has been out of action since last year, having been suspended for an ethics code violation involving an extramarital affair.

With a fresh outlook for 2021, Seto told Asian media this week, “Last year, I apologized for the inconvenience caused to many people by my actions. During the suspension, I talked with my family, Japan Swimming Federation, JOC, and many others, and by looking back on myself, I was keenly aware of how I was in a privileged environment and had selfish thoughts. I would like to thank my family for supporting me in this situation and the people who warmly spoke to me.

“We would like to express our sincere gratitude to all the people concerned for their efforts toward the holding of the tournament [Japan Open]. With this feeling in mind, we will concentrate on the practice and the tournament in front of us. ”

Although Seto confirmed to SwimSwam last week that he has still been training as usual, his racing will be put to the test with immediacy to the tune of dual IM head-to-head battles with Kosuke Hagino. In fact, this Japan Open will represent the first time the two men have battled since November 2019.

While Seto was on the sidelines, Hagino was taking names as a member of the International Swimming League (ISL) team Tokyo Frog Kings. The 26-year-old 400m IM Olympic champion remained undefeated in the short course version of that event throughout the season.

While Hagino is sticking to the IMs, Seto is also tackling the 200m fly here at this Japan Open, sharpening his skills in the quest of adding this as a 3rd individual Olympic event once the Japan Swim rolls around. We expect him to also race the 200m free at that meet to potentially become a member of the 800m free relay for a home-based Games as well.

You can read more about Seto’s ‘Team Daiya’ affiliation seen on the start lists here.

On the women’s side, the Swammy Award winner for Heart of a Champion, leukemia survivor Rikako Ikee, is entered in the 50m free to get her 2021 calendar year underway. The 20-year-old was originally set to race at the aforementioned Tokyo New Year’s Meet, but decided to hold off as Tokyo’s coronavirus cases were on the rise.

Yui Ohashi, who, like Hagino, remained undefeated in the 400m IM as a member of the Tokyo Frog Kings in the ISL, is entered in this meet, along with one of the top 200m flyers in the world right now, Suzuka Hasegawa.

Look for a full meet preview of the top races to watch as we get closer to this 2021 Japan Open.