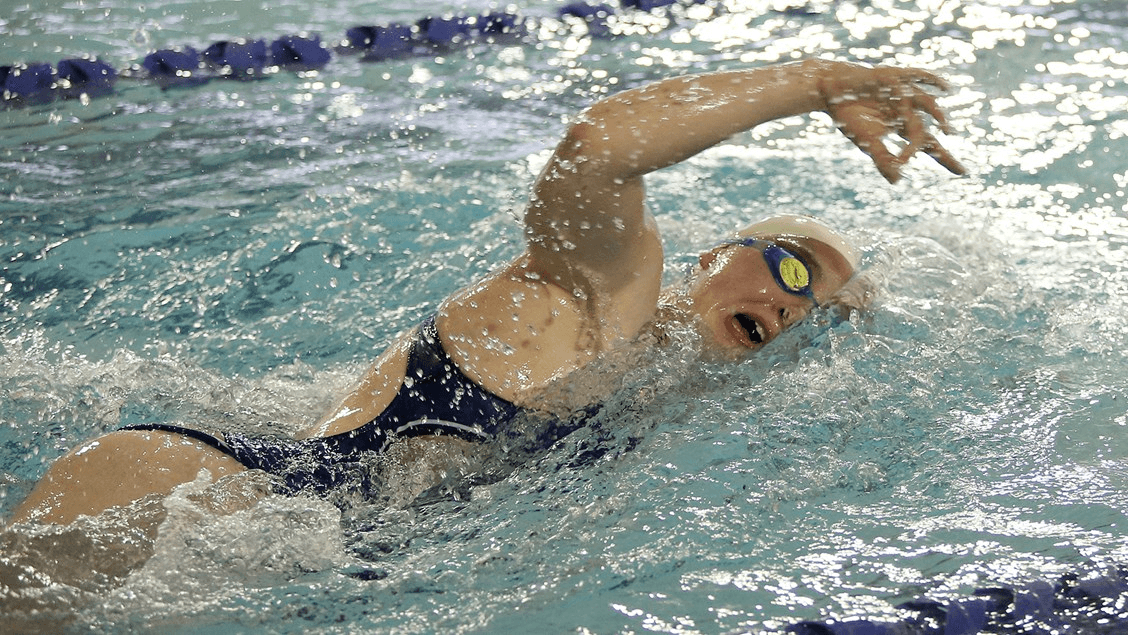 WASHINGTON- George Washington men’s swimming and diving finished out a season sweep of District foes Saturday by claiming a pair of wins Saturday at McCarthy Pool.

Tommi Wolst, Alexander Auster, Dylan Arzoni, Jake Ortiz and Peter Nachtwey were individual winners for the Colonials, who knocked off host Georgetown and American in their return from winter break.

The Buff and Blue improved to 3-0 against crosstown competition this season, adding in a win over Howard during their fall schedule.

HIGHLIGHTS
– GW claimed both relays. Wolst, Auster, Emils Pone and Max Forstenhaeusler started the meet with a win in the 200-yard medley relay in 1:32.96, while Auster, Forstenhaeusler, Charles Sturgeon and Moritz Fath teamed up to take the 200-yard freestyle relay in 1:25.49 to close the meet.
– Wolst was a double individual winner. The senior from Germany touched first in the 100-yard breaststroke (57.85 seconds) ahead of second-place Sturgeon before adding a victory in the 200-yard individual medley in 1:52.98. He was also runner-up in the 200-yard breaststroke.
– GW put together a tremendous showing on the diving boards. Nachtwey set a pool record with his score of 352.35 in the 3-meter competition and was followed by Ortiz (309.80) and Nick Tomczyk (263.40), while Ortiz won on the 1-meter board with a score of 289.20 followed by Nachtwey’s 284.90.
– Auster’s victory came in the 50-yard freestyle. The senior from Canada finished in 21.35 seconds to narrowly edge Sturgeon, who picked up another second-place showing.
– GW also went 1-2 in the 100-yard freestyle with Arzoni finishing in 46.38 seconds followed by Fath.
– Fath (1,000 free), Forstenhaeusler (200 free), Pone (200 back) and James Torrez (200 fly) also notched individual runner-up finishes on the day to help the Colonials secure the sweep.

UP NEXT: GW heads to Christiansburg, Va., next Saturday for another tri-meet. This time, the Colonials will face host Virginia Tech and Cincinnati.

George Washington women’s swimming  and diving returned from winter break Saturday with a sweep of local foes at McCarthy Pool.

Gemma Atherley, Isabela Patino and Courtney Sicinski each claimed a pair of individual event wins to help the Colonials take down host Georgetown and American.

The Buff and Blue finishes the season 3-0 head-to-head against District competition after beating Howard in the fall.

HIGHLIGHTS
– Atherley picked up a pair of pool records to lead the Colonials. The junior set a new mark on the way to her win in the 200-yard backstroke (2:02.87) before teaming with Sydney Melnick, Grace Olivardia and Rebecca Smolcic on another one in the 200-yard freestyle relay (1:36.40). She also claimed victory in the 200-yard freestyle in 1:51.63 followed by teammates Andrea Moussier and Emily Zhang.
– Sicinski took both breaststroke events. The Colonials went 1-2-3 in the 200 breast with Sicinski finishing in 2:23.70, ahead of Jackie Torrez and Ann Juneau. The first-year from Pennsylvania also won the 100 breast in 1:07.75 with Juneau in second.
– Patino edged Torrez for the top spot in the 200-yard butterfly (2:05.10) before winning again in the 100-yard butterfly in 57.06 seconds with teammate Meghan Burton in second.
– The Colonials swept the top three spots in the 200-yard individual medley with a win from Zhang in 2:07.26 followed by Torrez and Juneau.
– Moussier was a winner in the 500-yard freestyle in 5:01.39.
– Zhang (100 free), Burton (100 back), Smolcic (50 free), Andrea Ho (200 back) and Tali Lemcoff (1,000 free) also recorded individual runner-up finishes.
– Gabriella Arendes was GW’s top diver on both boards. The sophomore from New York took fourth on the 3-meter board (266.20) and fifth on 1-meter (250.40).

UP NEXT: GW is back in action next Saturday with a quad-meet in which it will face Virginia Tech, Cincinnati and James Madison in Christiansburg, Va.

WASHINGTON – The Georgetown University swimming & diving team returned to action for the first time in nearly two months, coming away with a split in a tri-meet against local rivals George Washington and American on Saturday afternoon at McCarthy Pool. The Hoyas swept the Eagles, while both sides fell to the Colonials. The squad celebrated Senior Day, recognizing the team’s 11 seniors in a ceremony prior to the meet.

The Hoyas are back in the pool next weekend when they travel to Philadelphia for a dual meet at Drexel on Saturday, Jan. 19. The meet is scheduled to start at noon.

• The AU men picked up a number of fifth-place individual finishes, including Garrett Sooter (1,000 free) and Liam Riebling (200 fly).

• Kyra Manson had the best individual finish for the AU women, placing third in the 100 fly at 58.35. She also had a fifth in the 100 freestyle.

American competes next Saturday at George Mason in a quadrangular with the host Patriots, Army West Point and Old Dominion.