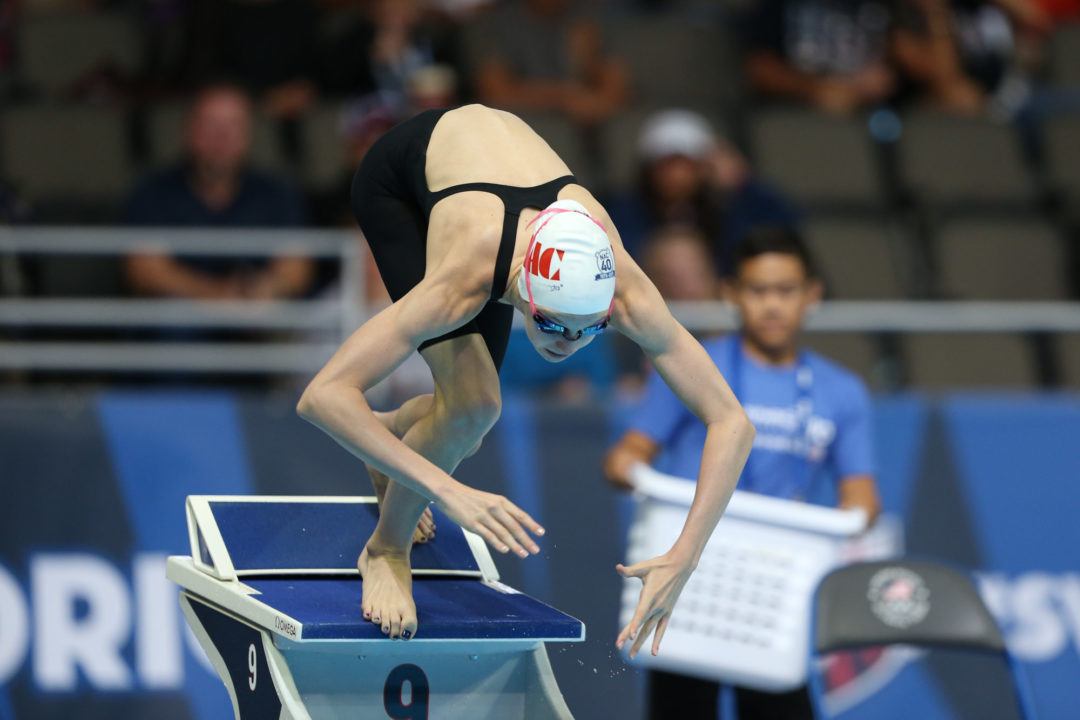 Gretchen, sister Alex, and teammate Ella Nelson combined for 4 individual event wins and a relay on the 1st day of the NAC-hosted Southern Premier Meet. Archive photo via Tim Binning/TheSwimPictures.com

The first day of one of the most exciting non-championship junior meets in the country saw the Walsh sisters pick up right where they left off in their first meet since the Tennessee High School state championship a month ago, and first club since they dominated Winter Juniors in December.

15-year old Gretchen Walsh won the 200 free in a new lifetime best of 1:45.88. That knocked 2 full seconds off her previous flat-start best, which was set at this same meet last year. It was also faster than the 1:46.1 that she swam on a relay start at Winter Juniors – East.

She won that race by 2-and-a-half seconds, and in the process kicked off a near-clean-sweep for the Nashville Aquatic Club of the day’s girls’ “open age” events.

Alex Walsh won her first event in the girls’ 200 back with a 1:52.47, taking a 5-second margin of victory over Lakeside’s Annabel Crush.

The wins on the boys’ side were much more evenly distributed, with only one team winning more than 1 race.

Owen Conley of the Dayton Raiders won the boys’ 200 backstroke in 1:44.77. That’s his new best time by almost a second, and on top of his drop at Winter Juniors, he’s dropped 4 seconds in 3 months. His teammate Nicholas Perera won the 400 IM in 3:48.87, which is almost a two-second drop for him, and gave him almost an 8-second margin of victory in the meet.