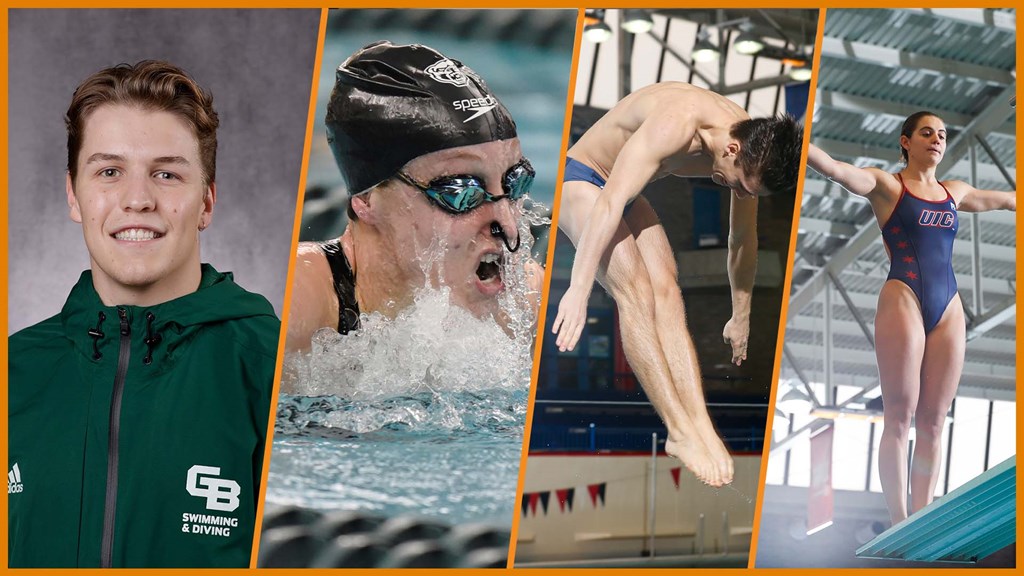 UIC’s Felix Lafortune and Cydney Liebenberg were also named the conference's Men's and Women's Diver of the Week. Current photo via Horizon League

INDIANAPOLIS – Green Bay’s Ben Redman and Oakland’s Susan LaGrand Nike® #HLSD Swimmer of the Week. Redman competed in three events and won those events, winning the 50-yard freestyle (20.38), the 100-yard freestyle (45:45) and was a part of the 200-yard medley relay that touched in a time of 1:31.86. LaGrand picked up six first place finishes over the week, with three being individuals races, and the other three coming as relay races. UIC’s Felix Lafortune and Cydney Liebenberg earned Nike® #HLSD Diver of the Week. Lafortune dove to two victories, winning the one-meter with a score of 326.03, and winning the three-meter with a score of 340.58. Liebenberg also picked up wins in both events, scoring 290.48 in the one-meter dive, and 286.65 in the three-meter dive.

MEN’S SWIMMER OF THE WEEK | BEN REDMAN | GREEN BAY | SENIOR | EAU CLAIRE, WISCONSIN.
Ben Redman competed last Saturday against Valparaiso and Youngstown State, and he finished first in all of the events he was in (three). He has yet to lose an event this year. He was part of the Green Bay 200-yard medley quad that touched the wall in 1:31.86. Redman grabbed the 50-yard freestyle with a 20.38, and the 100-yard freestyle with a final time of 45.45.

MEN’S DIVER OF THE WEEK | FELIX LAFORTUNE | UIC | SENIOR | GATINEAU, CANADA.
Felix Lafortune returned to his league championship form, winning both diving events in UIC’s dual meet win over Milwaukee.  He scored 340.58 on the 3-meter board, passing the NCAA Zone standard and winning the event by over 38 points.  His 1-meter score of 326.03 also easily exceeded the Zone standard.  His list earned two scores of 8.0 or higher. Lafortune’s scores in both events represented increases from his season debuts a week ago against Northwestern.

WOMEN’S DIVER OF THE WEEK | CYDNEY LIEBENBERG | UIC | SENIOR | PRETORIA, SOUTH AFRICA.
Cydney Liebenberg was a double winner in UIC’s dual meet with Milwaukee.  She scored 290.48 in 1-meter diving, over 17 points ahead of the second place diver and comfortably ahead of the NCAA Zone standard.  On the 3-meter board, she scored 286.65 to make another Zone cut, and leave the field over 40 points behind her.  Liebenberg had three dives score over 50 points in 1-meter, and two more in 3-meter.