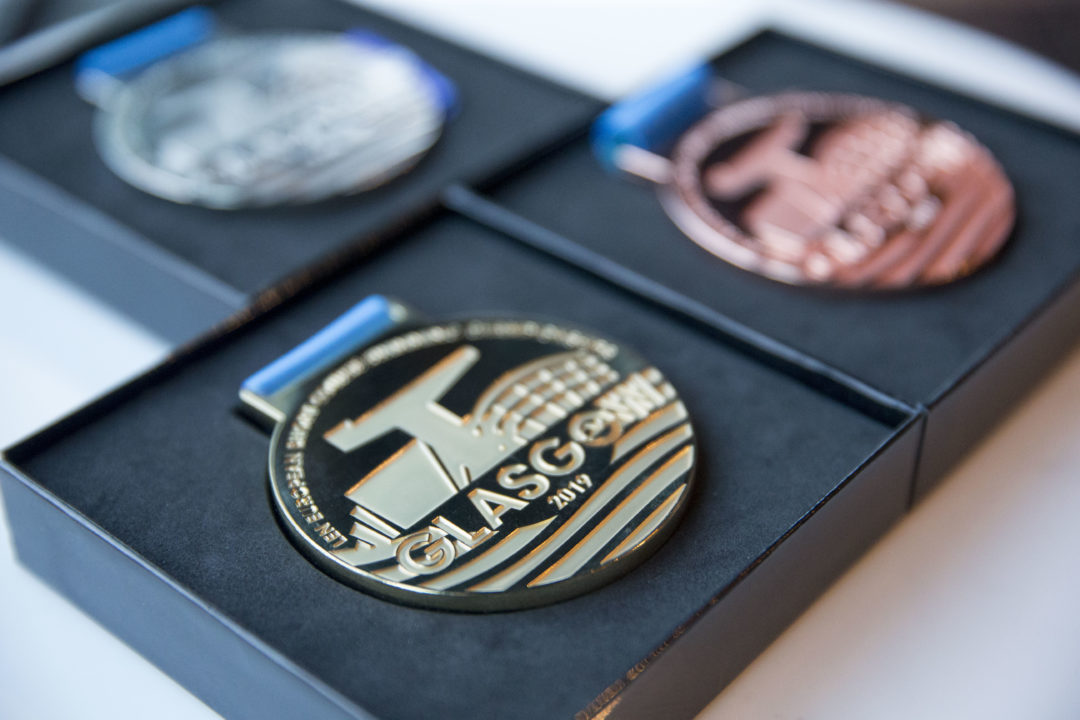 The medals will incorporate several key elements such as the addition of a ripple effect to the medal while giving it a three-dimensional look. Stock photo via Mark Horsburgh/ Glasgow 2019

Organizers for this upcoming December’s short course European Championships have unveiled the medals that athletes will be racing for in scarcely three weeks at the Tollcross International Swimming Centre between December 4 and December 8 of this year, marking the championships’ 20th anniversary. 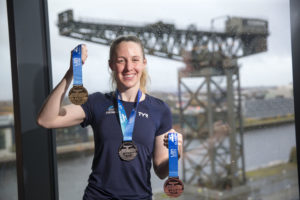 The medals, which were designed with the help of Scottish swimming ace and three-time Olympic swimmer Hannah Miley, will incorporate several key elements such as the addition of a ripple effect to the medal while giving it a three-dimensional look. The design will also consist of more subtle changes such as having individual event titles engraved on the medals, ensuring they are prizes athletes will treasure for a lifetime. Miley and fellow Scottish swimmer Scott McLay were on sight at the official unveiling.

“I was delighted to be involved in designing the Championship medals, and it was great to input some ideas from an athlete’s perspective,” Miley said. “The medals will be something athletes from all around the world will treasure forever, and a great reminder of what I’m sure will be an amazing event in Glasgow. I’m so excited for Scotland to host another major international sporting event and can’t to see it all come to life over the next few weeks,” Miley added.

Accompanying Miley at the event was Scott McLay, Scotland’s most successful Commonwealth Youth Games athlete of all time, as he set personal bests in both Glasgow and Gwangju already in 2019. McLay, who made his senior debut at this summer’s FINA World Swimming Championships in South Korea, will look to continue his progress on the senior level. 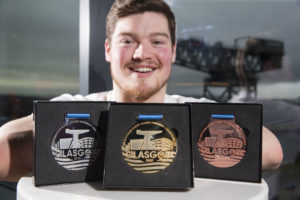 Scott McLay with the medals for the 2019 European Swimming Championships. Courtesy: Glasgow 2019

“The Commonwealth Youth Games medals I have are pretty iconic but I think Glasgow and Hannah have done a great job in the design of these,” said McLay. “Having made my first GB senior team in the summer and seen a number of my teammates picking up medals, it has only stoked the fire even more and I’d love to get my hands on one of these in a months’ time,” McLay added.

The city of Glasgow welcomes the Championships for the first time, as it continues to build its reputation as a truly world-class sporting city. The competition will be the third major European event held in Glasgow within twelve months of the  hugely successful inaugural multi-sport European Championships, and the European Athletics Indoor Championships earlier this year in the Emirates Arena. Glasgow continues to receive global recognition as major event hosts with a coveted top-five ranking as an ultimate sporting city.

“We’re one of the top five sporting cities in the world, and we’re known for setting new high standards for major sporting events – and I’m sure the 20th LEN European Short Course Swimming Championships will be no different,” said Billy Garrett, Director of Sport and Events at Glasgow Life and Co-Chair of the Glasgow 2019 Steering Committee.

Spectators will watch as European Champions are crowned over five action-packed days in Glasgow as some of Europe’s finest swimmers compete in 40 short course (25-meter pool format) events.

“It’s hard to believe we’re now just weeks away from the next major international aquatics event in the UK. It’s been a fabulous year for our swimmers, starting at Tollcross back in April at the British Swimming Championships, and I know our team are keen to end the year on a high back in Glasgow, by getting their hands on some of these beautiful medals,” said Jack Bucker, British Swimming’s Chief Executive Officer.

Official #EuroSwim2019 ambassador @HannahMiley89 had a vital role to play in creating the medal for the LEN European Short Course Championships 2019 🙌 pic.twitter.com/fH4XOyHqbQ