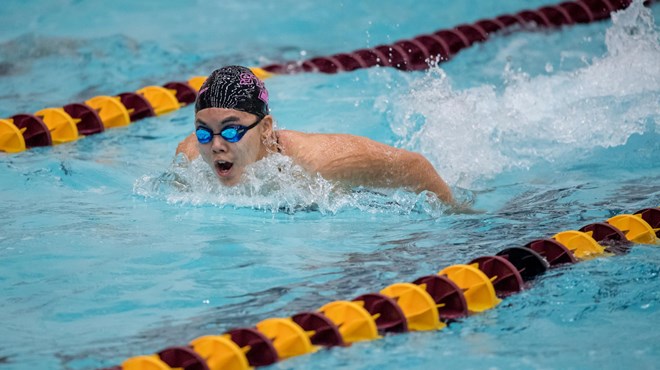 Numerous Zone diving qualifying marks were posted on the night. Dana Liva and Jayna Misra finished with a score just .05 apart on the three-meter. Liva came in first with a 297.35 and Misra in second at 297.30. Misra becomes the seventh freshman since 2000 to post a Zone qualifying score.

In three-meter diving, Michelle Schlossmacher Smith claimed her third Zone cut with a score of 292.00. The dual also marks her third consecutive meet topping her previous personal record. Misra and Liva followed with their score of 277.85 and 275.50, respectively, rounding out the total Zone qualifying scores to five.

“I thought with the five Zone cut scores that the divers got, that’s a big deal,” head diving coach Jeff Warrick said. “Usually that doesn’t happen. I thought they dove really well and deserved those scores. The whole team, even the ones who didn’t get the Zone cut score, I saw some really good things from everybody top to bottom.”

The Cyclones remain unbeaten in relay events, bringing the win streak to three in the 200 medley and 400 free relay. The team of Wyli Erlechman, Martha Haas, Elynn Tan and Anna Andersen timed in first at 1:45.11 in the 200 medley relay. The 400 free relay squad of Andersen, Elynn Tan, Keely Soellner and Sophia Goushchina out-touched South Dakota with a time of 3:33.54.

Goushchina, a freshman, slid into the second spot on the Iowa State season top-five performers list with her time of 57.14 in the 100 back. Freshman Elizabeth Richardson improved her second-place time on the list in the 200 back with a 2:05.13.

“We swam some off events and our second and third level swimmers were put in a position that they had to go out and take on the top swimmers from South Dakota,” said head coach Duane Sorenson. “I thought we did an outstanding job of competing and racing, not just finishing strong but taking our races out strong and then bringing it back the second half.”

Iowa State returns to competition as the swimmers and divers split up. The divers head to Columbia for the Mizzou Invite from Nov. 21-23 and swimmers to Topeka for the Kansas Classic Nov. 22-24.

Pederson finished second in the one-meter diving competition with 270.65 points, a season-best, which qualifies her for the NCAA Zone Diving Championships in March.

Sabrina Sabadeanu had a pair of individual runner-up performances in the pool, part of seven in the dual for the Coyotes. The senior swam 58.26 in the 100 back and posted a season-best of 2:05.07 in the 200 back.

Teagan Haberkorn, a freshman, posted a season-best of 5:18.55 in the 500 free to finish second while also swimming a season-best was Isabel Fairbanks in the 200 IM (2:12.02), an event she finished second in.