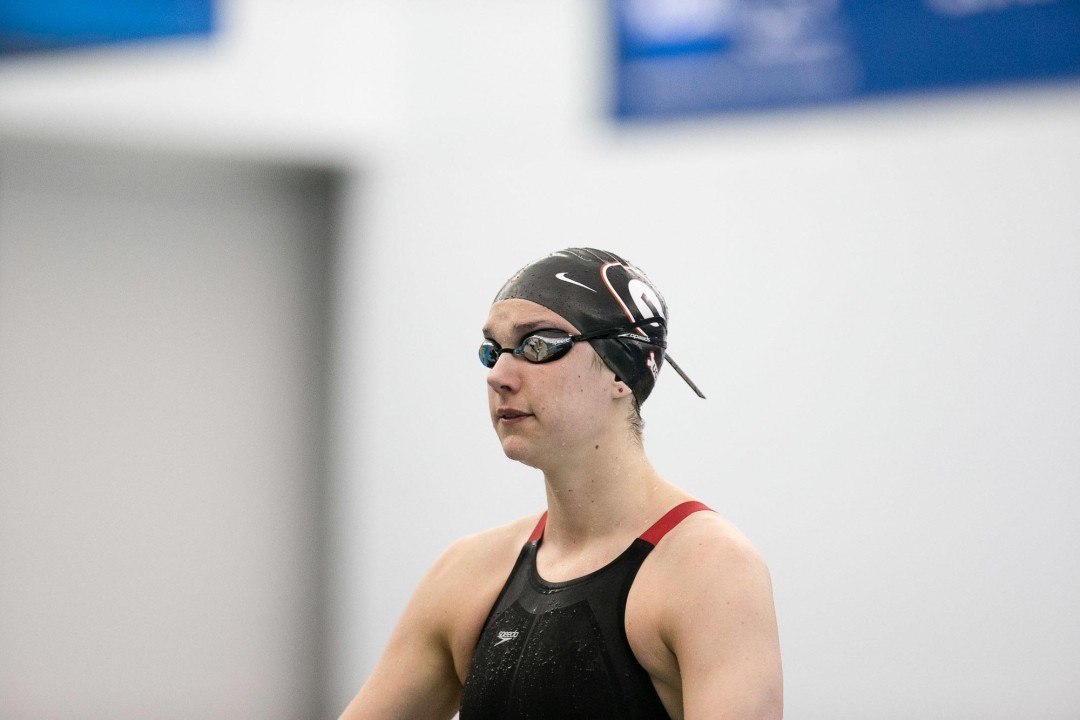 Georgia's Chantal Van Lendeghem is planning on sitting out the next NCAA season to focus on Olympic training. Archive photo via Tim Binning/TheSwimPictures.com

A Swimming Canada spokesperson told us that Canadian National Team member Chantal Van Lendeghem is planning on sitting out the next NCAA season to focus on Olympic training. Van Lendeghem is a Canadian record holder, an NCAA All-American, and winner of the NCAA’s Elite 89 award as a sophomore. She just finished her junior season at the University of Georgia.

At this point, it is unclear if Van Landeghem is foregoing her senior year or just taking an Olympic redshirt and then coming back for her senior season in the fall of 2016. Several swimmers this season have already confirmed they will be taking an Olympic redshirt, as well. The most notable of that group includes the 2015 NCAA Champion in the 200 breaststroke, Kierra Smith, from Minnesota. Smith is also a Canadian National Team member.

If you search through the NCAA rule-books, there is no real “Olympic Waiver” rule per se, rather there are several waivers that allow athletes, when training for certain designated international events, to fall behind the progress-towards-degree requirements and other eligibility requirements and still compete with the college team. Usually, athletes who take an “Olympic Waiver” are employing a few of these different rules.

Tim Phillips of Ohio State and Allison Schmitt of Georgia opted to go with simple “redshirts,” where an athlete doesn’t compete for the NCAA team, and maintain the extra year of collegiate eligibility. In both of these situations, the athletes have also chosen to not participate in classes (and fulfill the the progress-towards-degree requirements), and have actually decided to train with other teams. Phillips went to train with David Marsh at SwimMAC and Schmitt went to train with Bob Bowman at North Baltimore.

These Olympic waivers have been great for several foreign student athletes. Indiana’s Eric Ress was able to extend his NCAA eligibility and compete in 4 season overs a period of 6 years because of the waiver. He used one waiver because of an injury and another to take a year to train for the Olympics back in France.

There have been a few complex situations where a waiver has allowed a swimmer to practice and compete with the Texas swimming squad during the spring semester without being enrolled as a full-time student. Texas sprinter Jimmy Feigen was the most recent swimmer to use an Olympic waiver to compete at the NCAA championships without being enrolled as a full time student. The timing of the US Olympic Team trials make it much easier for American athletes to do this, however. Many Olympic Trial meets for foreign countries conflict with the timing of the NCAA Championships, making it hard for swimmers to swim at their best for both meets.

Wouldn’t be shocked if a lot of the foreigners do this as well as some higher profile Americans.

Anyone with a shot at their Olympic Squad has to do this, IMO.

It worked VERY well for you, David, from what your fans could see! 🙂