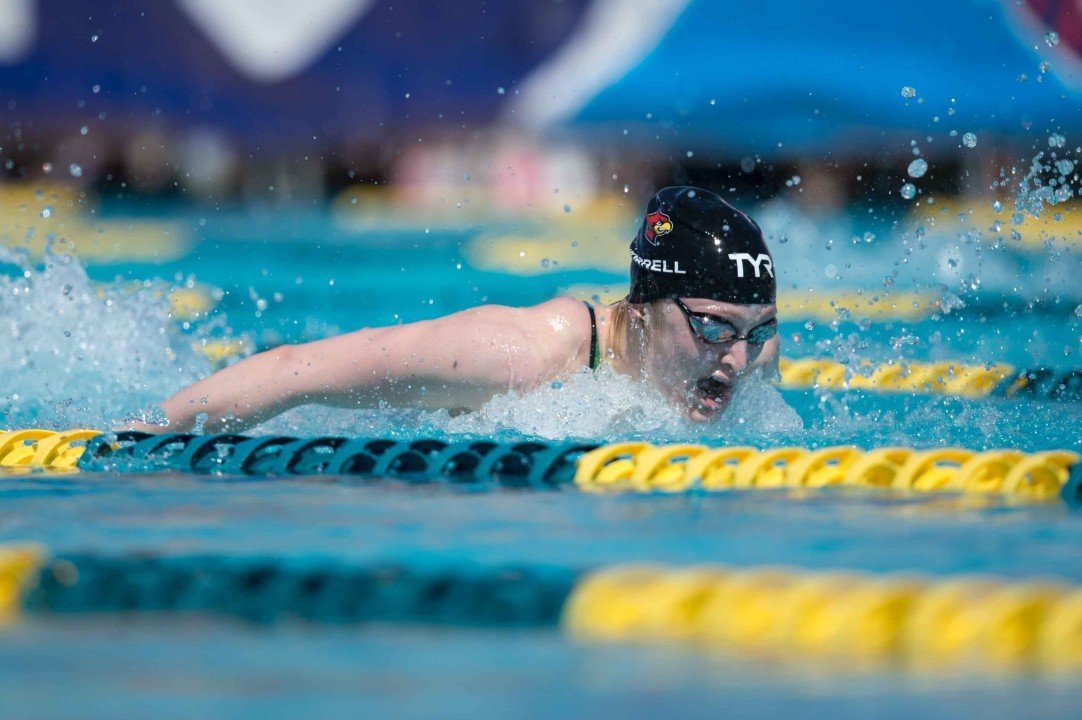 Kelsi Worrell is expected to crush records of all kinds in the butterfly events at NCAAs this season. Archive photo via Mike Lewis/Ola Vista Photography

Take a good look at the record board below.

Phelps. Lochte. Coughlin. Grevers. Vanderkaay. Knutson. Burnett. Descenza. Tarwater. Komisarz. Some of the legends with their names up there.

The Georgia Tech Campus Aquatic Center has seen greatness, but there is a big storm coming: the NCAA Championships. What records are safe? Which pool marks will be absolutely smashed? How will the upcoming men’s and women’s NCAA Champs re-shape this legendary record board?

First, we give you a look at last year’s Women’s Championships and see what kind of damage the Georgia Tech record board will take for the upcoming Women’s Champs.

The Cal Golden Bears earned the NCAA title last year with their Olympic-level squad, as Missy Franklin broke Greensboro Aquatic Center pool records in the 200 free, 200 IM, and 200 back as well as on the 800 free relay and 200 free relay and Rachel Bootsma took down the 100 back pool record and contributed to an NCAA title and a pool record in the 200 medley relay with her blazing 23.39 lead off in finals. In total, every swimming pool record was rewritten, save for the 200 breast, the 500 free and the 1650 free.

We’ve divvied up all of the women’s pool records into three categories:

Without further ado, let’s get into our predictions for how the Georgia Tech pool record board will fare against the field of the 2016 Women’s NCAA Championships.

The Distance Freestyles – No, Ledecky won’t make her NCAA debut this year. That won’t matter, though, because Leah Smith is a star in the making and she’s already been faster than pool records in the 500 through 1650 by a significant margin.

In her collegiate career, Smith has been under 4:35 altogether a total of six times (4:30.37 marks the NCAA record holder’s lifetime best) as well as under 15:50 four times (15:34.46 is her best). She’s already been swimming exceptionally well this season, and has little expected competition in her events this year– top domestic talents like Ledecky, Runge, Becca Mann, and Sierra Schmidt are all either too young or sitting out a season.

Her top threats in her record chase will be last year’s 3rd place finisher Jess Thielmann of Florida (who holds the mile record) and Brittany Maclean of Georgia. Thielmann’s never broken 15:46 in the mile and wasn’t really in the 500 race, despite making the A final. Maclean, however, seems to have bounced back from injury and has already posted the #2 time in the NCAA this year in the 1000 (9:42.40) which ranks just over a tenth behind Smith’s season best of 9:42.23. Maclean won the 500 and 1650 titles in 2014, posting a very fast 15:27.84 that still stands as the NCAA record today.

If Maclean can return to form, Smith will most certainly not be alone in the distance events–regardless, the three above records are definitely goin’ down this year.

The Backstrokes – Missy has gone pro, but the backstroke talent in the NCAA still runs incredibly thick. Add names like Rachel Bootsma, Courtney Bartholomew, and Liz Pelton, and you’ve got a scary-good gauntlet of backstroke talent that will more than likely unseat Bartholomew’s backstroke records set earlier this year.

Both Bartholomew and Bootsma finished under the Cavalier’s 100 back pool mark of 50.58 last year at NCAAs, with Bootsma claiming the win at 50.03. Bartholomew has a personal best of 50.01, however, and the two will clash again in their senior seasons with two of the top programs in the nation. It would be silly, too, to ignore the potential that Cal’s star rookies Amy Bilquist and Kathleen Baker could bring to this A final. Keep a close eye on Coughlin’s magical NCAA, U.S. Open, and American mark of 49.97, too.

In the 200, keep Bartholomew and swap the Cal girls– Pelton will face Bartholomew, and the Cal Bear will look to avenge her slide to 7th place in finals last season. Bartholomew is the sole returner sub-1:50, but Pelton did set the American record of 1:47.84 way back in 2013. These two will feel the heat from rising stars Danielle Galyer and Kylie Stewart, as well as potential party crashers in freshmen standouts Quinn Carrozza or Baker.

The Breaststrokes – Look for UVA junior Laura Simon and Stanford’s Haase to take care of these ones.

Haase nearly broke 58 in the 100 last year, and Simon dipped under 2:07 last year to earn the runner-up spot behind Kierra Smith, who is red-shirting this year. Simon will find opposition in Louisville’s Andee Cottrell, who is coming off a fantastic summer and has already been under 2:09 this season (albeit suited at the historically fast SMU Classic). IU newcomers Lilly King and Miranda Tucker are certainly names to keep an eye on, too. Both have posted top 10 times in the 200 this season.

Look for King and Cottrell in the 100, too. Haase does not have this one in the bag– King surged onto the national scene this summer, and her LCM best of 1:06.69 suggests that her SCY best of 59.63 is going to get quite the renovation this season. Meanwhile, Cottrell is the first and only sub-minute 100 breaststroker in the nation this year.

The Butterflies – Kelsi Worrell. Not much else needs to be said.

Yup. Piece of cake. Flickinger looks to have a monster season coming up once again to challenge in the 200, but Worrell is queen of butterfly right now. Katie McLaughlin cannot be slept on, either, but she’s got a much better shot at taking down a record along with Worrell in the 200.

All Relays – Way too much talent in the NCAA to argue that any of these relay pool records are safe.

Stanford, Cal, and Georgia are still incredibly stacked teams (but those West Coast schools are SERIOUSLY LOADED). UVA and L’ville have deadly medleys again. NC State, USC, Michigan, and UNC will be looking to break through to the top. It’s unclear right now how it will all fall into place, as relays are some of the hardest events to predict come taper, but these pool records are definitely goin’ down.

COULD GO EITHER WAY

100 freestyle – Despite international forces like Manuel and Chantal van Landeghem sitting out this season, there is still talent around that could challenge Coughlin’s pool record here.

Last year, Lia Neal and Natalie Hinds toed the 47.0 line, both posting 47.1’s to finish up right behind Manuel. Neal, however, went on to blast a 46.84 to lead off Stanford’s 400 free relay on the final day of the meet. Both of these women have the guts to challenge this record, but it’ll certainly be close.

Once again, NCAA newcomers look to be in the mix. Michigan’s Siobhan Haughey has already been 48.45 this season, and UCLA’s Caroline McTaggart looks to have some firepower this year as well. Bilquist again could factor in here.

200 freestyle – All eyes will be on Neal again.

Neal was under this leading off Stanford’s 2nd place 800 free relay and dropped another couple tenths in the individual 200 free final for 3rd place, tallying two sub-1:43 performances with a flat start. Pelton could shift from the 100 back to the 200 free and challenge this record, especially after an impressive 1:42.69 split on Cal’s 800 relay last year at NCAAs. Look out for IU’s Kennedy Goss and newcomers Haughey and Louisville’s Mallory Comerford to step up this year. Neal will be the favorite, but the record is no gimme for her.

The IMs – More of Knutson’s marks are in jeopardy this season. Madisyn Cox is now a proven IM force after an excellent summer following an impressive NCAA charge, and Ella Eastin is a young star ready to make her mark collegiately.

Eastin dipped under 1:54 this past spring, while Cox was a 1:54.4 at last year’s NCAAs. Those two look the most shored up to slug it out for the 200 race, while the 400 brings more players to the pool.

Hali Flickinger was runner up last year at 4:02.73, and has steadily improved each year at Georgia. She’ll clash with Eastin and Cox, along with Minnesota sophomore Brooke Zeiger, whose 4:03.28 from Big Tens proved too hard to replicate at NCAAs. Zeiger, though, will look to put up competitive times where it counts this year. 4:00 is a stretch, undoubtedly, which is why this one could go either way.

50 Freestyle – Breathe easy, Natalie. It doesn’t seem very likely that this record of yours is going to bite the bullet this year.

The field will be very close this year, with Farida Osman, Olivia Smoliga, and Worrell expected to duke it out. Sub 21.5 is no easy task, however. Smoliga’s been the fastest, at 21.53, but that came during her stellar freshman season and she hasn’t looked quite the same since.

Auburn junior Allyx Purcell has already been sub-22 on a relay in a dual meet, but there is no clear star in this event this year. Without Manuel and Abbey Weitzeil this season, this may be the only pool record to survive the upcoming NCAA Champs.

That wraps things up– disagree with one of our predictions? Let us know in the comments how you think the record watch will play out come NCAAs.

Stay tuned– the men’s edition of this report will be out soon!

Does anyone think some pool records could fall during Winter Junior Nats?

Can we get a picture of University of Texas’ record boards? Cannot be found online

Allyx Purcell has been sub 22 without being on relay in the 50. Watch Ashton Ellzey who has also been sub 22…..and I heard from a good source she went 21.90 at practice yesterday.

“Reaney. Smith. Bilis. Simon. Thielmann. Bartholomew. NCAA stars who will meet again in March.”
Emma Reaney graduated in 2015 and will not been competing at NCAAs.