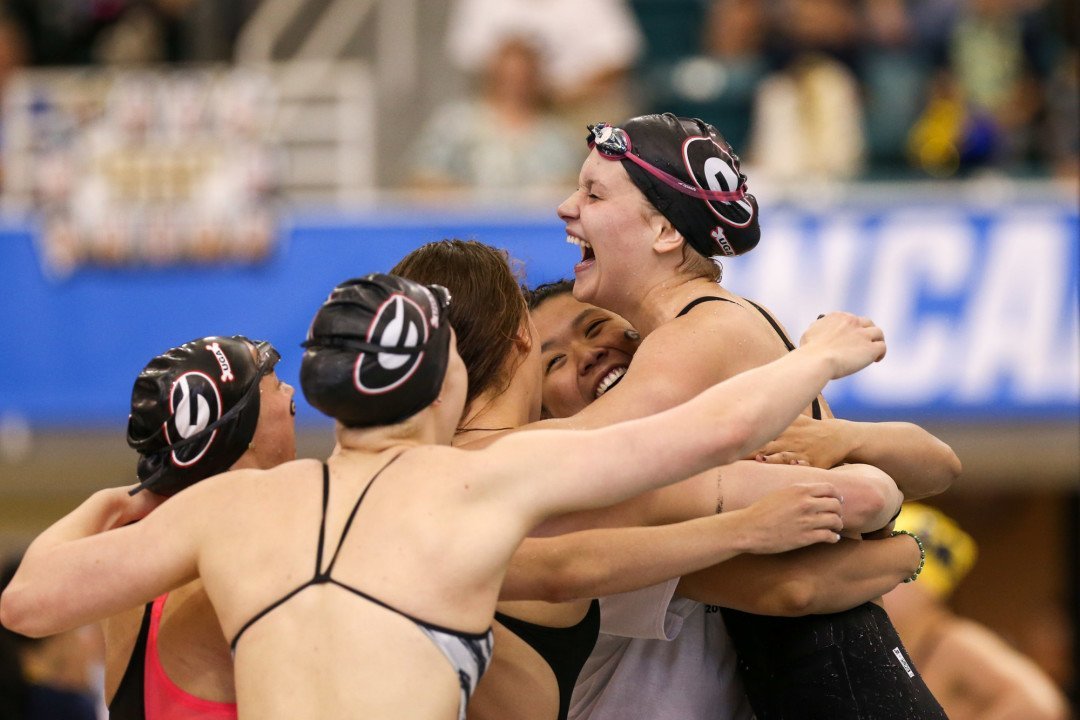 Georgia’s swimming and diving teams will open their seasons against North Carolina on Friday at 2 p.m in the Maurice J. Koury Natatorium in Chapel Hill, N.C. Current photo via Tim Binning/TheSwimPictures.com

Georgia’s swimming and diving teams will open their seasons against North Carolina on Friday at 2 p.m in the Maurice J. Koury Natatorium in Chapel Hill, N.C.

“North Carolina has a really good program,” Georgia head coach Jack Bauerle said. “We always have close, competitive meets with them. Our kids are excited and have been working really hard. There are a lot of young swimmers and divers ready to show what they’ve got. We are all excited to compete again. With a new season, you have new team makeups and you have new opportunities. We’re looking forward to seeing what happens with our teams.”

Seniors Pace Clark, Taylor Dale, Patrick Humphreys, Chase Kalisz, John Mattern, Chris Powell and Walker Wheeler will lead the Bulldogs. Kalisz earned a silver medal at the 2016 Olympic Games in the 400-meter individual medley and returned to Georgia after redshirting in the 2015-2016 season.

Coming off of an NCAA Championship in March, the Lady Bulldogs are anchored by seniors Emily Cameron, Kimberlee John-Williams, Olivia Smoliga, Kelly Thatcher, Chantal Van Landeghem and Rachel Zilinskas. Smoliga claimed a gold medal at the Olympics in the 400-meter medley relay, while Van Landeghem earned a bronze on the 400-meter freestyle relay.

Smoliga won the 50- and 100-yard freestyle national titles in March, extending Georgia’s streak of at least one male or female individual or relay winning an NCAA title since 1995. Kalisz and Van Landeghem also boast past national champion titles.

Juniors Gunnar Bentz and Jay Litherland also competed at the Games, where Bentz brought home a gold medal on the 800-meter freestyle relay and Litherland finished fifth in the 400-meter individual medley. Freshman Javier Acevedo represented Canada in the 100-meter backstroke at the Games as well.

Bauerle is entering his 38th season as head coach of the women’s team and 34th of the men’s squad. He has led the Lady Bulldogs to 310 dual-meet victories (joining Tom Groden of Boston College as the only members of the 300-wins club), seven national championships and 12 SEC titles during his tenure. Counting his 221 wins as the Bulldogs’ coach, Bauerle has an overall record of 531-124-3. That figure ranks first all-time in the SEC, second among active coaches and third on the all-time national list.

Bauerle-coached teams are 38-4 all-time against North Carolina:­ 22-0 for the women and 18-4 for the men. The Lady Bulldogs have won 14 straight season openers and are 28-9 all-time under Bauerle.

Live results will be available through GoHeels.com.