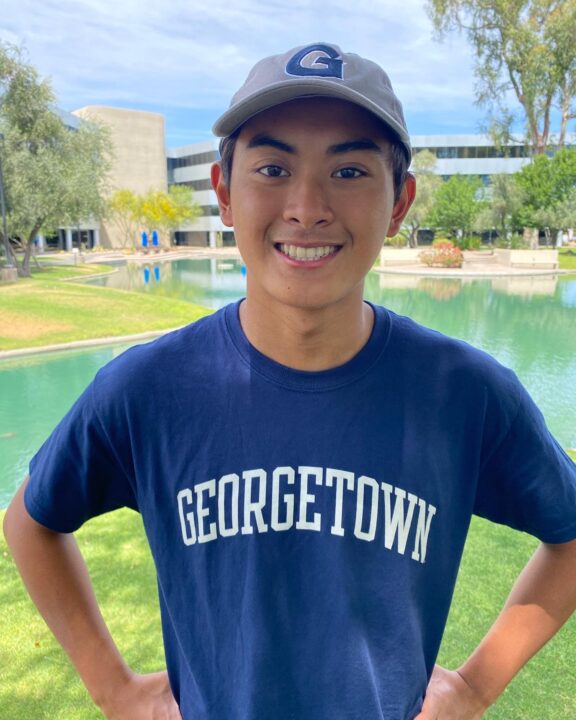 Gonda will come to campus with a time in the 200 fly that would have scored in the A-final of the 2022 Big East Championships.

A rising senior at Brophy College Preparatory High School in Phoenix, Arizona, Gabe Gonda has announced his decision to travel to the East coast in the fall of 2023 to swim for Georgetown University. Gonda, who will be a captain of his high school team this season, currently trains under Olympic gold medalist Darian Townsend at the Phoenix Swim Club. Gonda was also named to the USA Swimming Scholastic All-America team last year.

“I am thrilled to announce my verbal commitment to continue my academic and athletic career at Georgetown University! Thank you to my family, friends, teammates, and coaches who have supported me along the way to make this dream come true! I’m so grateful for this opportunity to be a part of such an amazing team! Hoya Saxa!”

Last fall, Gonda was a two event finalist at the AIA Division I Swimming and Diving State Championships while representing Brophy Prep. Posting a pair of lifetime bests, he finished fourth in the 200 IM (1:52.08) and fifth in the 100 fly (50.50). As a freshman, Gonda was a part of the Brophy Prep team that won it’s 32nd straight state title. The team was forced to pull out of the meet during his sophomore year after multiple members of the program tested positive for C0vid-19 just days before the start of the meet.

In the long course pool Gonda has posted numerous lifetime bests throughout the summer. At the Arizona Senior State Championships, he swam to personal bests in the 200 free (1:58.16), 400 free (4:11.11), and 200 fly (2:07.17). That time in the 200 fly was ultimately fast enough to earn him third overall in the event. The only two swimmers faster than him in the event were NCAA Championships finalist Brooks Fail and Keaton Jones, one of the top recruits in the class of 2023.

Gonda will be joining a Georgetown team that is coming off its first ever Big East Swimming and Diving Conference Championship title. The team was led by four time Big East Most Outstanding Swimmer Drew Carbone, who claimed gold in both backstroke events, as well as the 200 IM. The Georgetown team was also recognized as the Men’s Swimming Coaching Staff of the Year.

While versatile, Gonda will likely make his biggest impact for the Hoyas in the fly and IM events. Last season, his lifetime best swim in the 200 fly would have made him the program’s second fastest performer all year. It also would have earned the highest finish for the team at the 2022 Big East Championships, with his time being fast enough to finish 5th in finals. The team was led in the event last season by sophomore Will Barao. Barao, a transfer to the program from Notre Dame, will be a senior on the team when Gonda arrives on campus next fall.