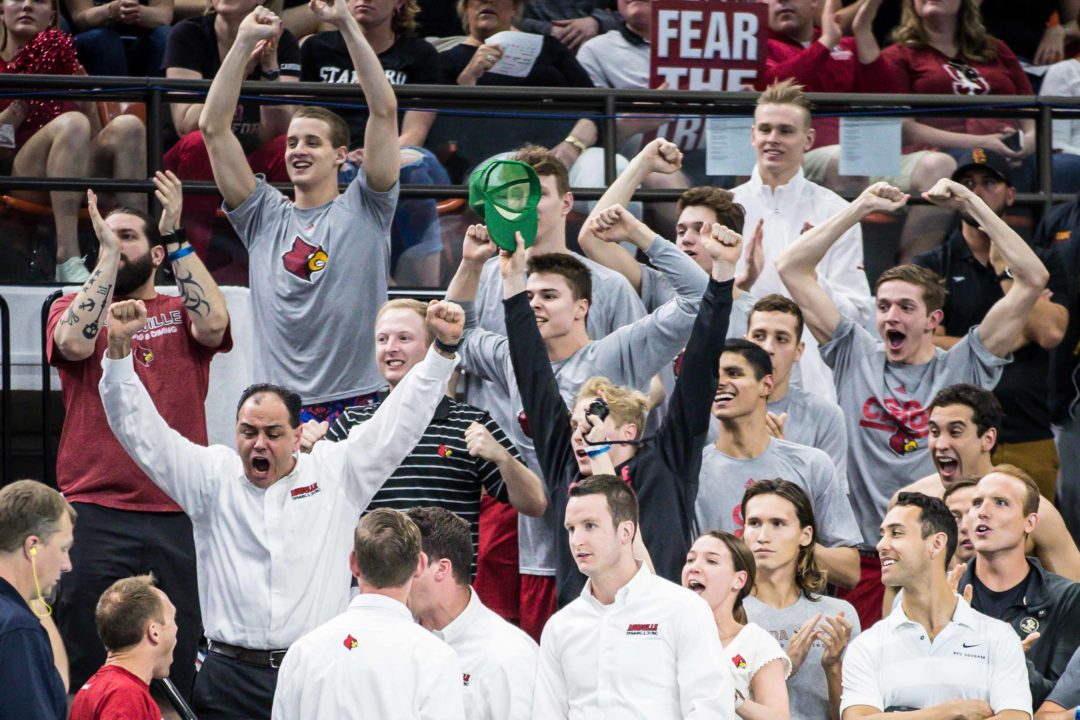 The Louisville Cardinals headed across the state to face the University of Kentucky Wildcats in some relatively-rare interconference action today. Both teams teams suited up, and the Kentucky women and the Louisville men emerged victorious, with some races highlighting both sides of the competition.

The #10 Louisville women had a few notable absences, including Gabi Albiero, Mariia Astashkina, Arina Openysheva, but even those three probably wouldn’t have been enough to turn the tide of the meet, as the #12 Wildcats were dominant in a 200.5-99.5 victory.

Wildcat junior Riley Gaines was the big star of the day, as she swept the three shorter freestyle events. After anchoring Kentucky’s winning relay, Gaines got going in the individual evens with a two second win in the 200 free, touching in 1:44.06. That would make her the 5th-fastest women in the nation this year, but she’s already the 3rd-fastest with her 1:43.68 from the Mizzou Invite in November. Gaines came back just a few events later to win the 50 free in 22.52, setting a new lifetime best. She wrapped up her day right after the break by setting a new Kentucky school record in the 100 free, touching in 48.42 to move up to #9 in that event nation-wide this season.

Gaines was the only multiple individual event winner of the day, with all seven of the rest of Kentucky’s indivudal wins coming from seven different women.

The Wildcats didn’t let up after the break, winning all but one of the remaining individual events.  Sophie Sorenson took the 200 back in 1:52.63, just 0.14s ahead of Brooks and setting a new season-best and moving to #9 in the nation. Gillian Davey won the 200 breast by over two seconds, touching in 2:07.67 and crack the top ten in the NCAA this season.

Kaylee Williams led a Kentucky 1-3 sweep of the 500 free, touching in 4:44.77, and Lauren Poole wrapped up the individual competition with a 1:57.01 win in the 200 IM. Both Williams and Poole hit season-bests in their respective events.

The Wildcat women were on fire in their home pool, and it’s hard to gauge what effect Louisville’s missing swimmers would’ve had if they were present. Hypotheticals aside, the Cardinals actually swam pretty solidly, also hitting a number of season-best times, although they only came away with three wins.

Kaylee Wheeler was the first Cardinal to pick up a win on the day, as she was the only woman to get under a minute in the 100 breast, touching in 59.99, with teammate Morgan Friesen taking 2nd in 1:00.46. While Kraus just missed out on the 200 fly win, she did earn the victory in the 100 fly, touching just ahead of Kentucky’s Brooks with a 52.94.

Louisville closed out the meet with a 3:18.17 win in the 400 free relay, highlighted by Christiana Regenauer‘s 48.6 anchor leg.

The score was almost as lopsided on the men’s side as it was on the women’s, although with the teams reversed, as the #7 Louisville men won 188-111.

Louisville jumped out to the lead early on, as Michtell Whyte (21.50), Evgenii Somov (23.79), Nick Albiero (20.42) and Haridi Sameh (19.15) combined for a 1:24.86. The Cardinals actually took the top three spots in this relay, and Dalton Lowe threw down a 20.01 fly leg on their ‘B’ relay. On paper, that would seem to increase the probability that Lowe could get bumped up to ‘A’ relay for ACCs/NCAAs, and the Cardinals could use Albiero relay on another relay, probably the 200 free.

Kentucky picked up three wins, two of them courtesy of Jakob Clark. The Wildcat sophomore swept the distance events, first winning the 1000 free by over three seconds in 9:01.99, then taking the 500 free towards the end of the meet with a 4:24.43. Mason Wilby was Kentucky’s only other event winner, and he led a 1-3 Kentucky sweep of the 200 IM with a time of 1:46.80.

LEXINGTON, Ky. –  For the fourth straight year, the Kentucky women’s swimming and diving program posted a dominant performance over a ranked Louisville camp, as No. 10 Kentucky defeated No. 19 Louisville at the Lancaster Aquatic Center on Saturday afternoon, 200.5-99.5. The final score marked UK’s largest triumph over UofL in the Lars Jorgensen era, as the team won 13 of 16 possible events.

Riley Gaines paced the women’s team in the pool on Saturday afternoon, winning all four of her events – one relay event (200 med-r) and three individual events (50, 100, 200 fr).

In the process, the junior reset the school record in the 100 freestyle race, touching the wall in a swift 48.42, which also ranks as the eighth-fastest time in the nation to date. Her time in the event is .04 faster than her previous career best and school record (48.46), which she recorded at the Mizzou Invitational in mid-November.

Gaines, a Nashville, Tennessee, native, also recorded a personal best in the 50 freestyle, earning a mark of 22.52. It beats her previous personal record by more than two-tenths of a second, which allowed her to advance five spots in the women’s all-time top-10 performance list, sitting in fourth.

The diving squad dominated the dual meet, earning the top score in each event – men’s and women’s 1- and 3-meter springboard.

Kyndal Knight, the reigning SEC Champion on 3m, swept the women’s events, winning both springboards. On 1m, Knight scored 310.35 points, less than four points off her career high and sixth-best score in school records (313.60). On 3m, the junior rallied 333.60 points, her third-best score on the board this season, but still more than 20 points off her personal record (355.58), which she recorded at then-No. 11 Alabama in mid-December.

Knight has won first place 10 out of 12 times this season, and she has earned first or second place 11 out of 12 times this season. The North Carolina native has won four of five appearances on the 1- and 3-meter springboards, respectively, and she has won two of two appearances on platform, meanwhile, she has competed against top talent in the nation including Alabama, Louisville, Missouri and Tennessee. Knight concluded the regular season having reset her career best on every discipline this season.

Jakob Clark had a phenomenal meet, beginning with the first individual race. The sophomore earned a career best in the 1,000 freestyle for the second straight meet, this time touching the wall in 9:01.99. He came into No. 11 Tennessee last week with a career best of 9:11.94, but snapped the personal record in 9:10.20 in Knoxville. This time, Clark rallied a time of 9:01.99, nearly ten full seconds faster than he has ever swum the event.

In the process of earning first place with his time, Clark also recorded the 13th-fastest time in the nation.

Proving their depth and versatility, the women’s team had six different swimmers earn first place on a time that was either a season best or career best that also ranks in the nation’s top-12 times to date. Those Wildcats and events include:

The No. 8-ranked University Louisville men’s swimming and diving team took down rival RV Kentucky 188-11 but the No. 19-ranked Cardinal women fell to No. 1–ranked 200.5-99.5 Saturday afternoon in Lexington.

UofL had outstanding individual performances from several Cardinals .  Kaylee Wheeler won the 100 breast and the 400 Free Relay. Alena Kraus took the 100 fly and the 400 free Relay.  Nicolas Albiero won both flys and both relays. Haridi Sameh won the 50-free, the 100-free and was on both winning relays. Multiple event winners also included Mitchell Whyte, who won the 100 and 200 back and the 200 Medley Relay. Senior Evgenii Somov won both breaststroke events and was on the winning 200 Medley Relay as well.

Here is a race-by-race breakdown:

The Cardinals swept the top three spots in the men’s 100 backstroke led by Mitchell Whyte (46.47), Nikos Sofianidis (46.98) and Jack Wever (48.22).  Tatiana Salcutan touched fourth in the 100 back with a time of 53.98 for the Cardinals. Teammate Tristen Ulett was right behind her with a 54.05. Kentucky won that event when Caitlin Brooks turned in a winning time of 51.99

Louisville took he top spots in the women’s 100 breaststroke as Kaylee Wheeler stops the clock with the winning time of 59.99 and teammate Morgan Friesen was in her wake with a 1:00.46. Louisville takes first, second, and fourth in the men’s 100 breast led by Evgenii Somov’s blazing time of 52.43. Aidan Kreiley was second in 55.46 and Tanner Cummings put up a 55.71.

The Cardinal sprint crew was hard to beat today as UofL’s Haridi Sameh threw down the winning time of 19.56 in the 50 freestyle. Teammate Mihalis Deliyiannis was second with a time of 19:93 and Caleb Duncan was third in 19.98. Christiana Regenauer was out-touched by 1/100th of a second in the 50 free, posting a 22.53 for second. Katie Schorrput up a 23.44.

Haridi Sameh took first in the 100 freestyle, getting his hands on the wall in 43.76, Colton Paulson was second in 43.93 and Michael Eastman was third in 43.99 for another Cardinals sweep. In the women’s 100 free, Kaylee Wheelertouched third with a time of 50.38 and Katie Schorr was fourth in 50.42.

In the 200 breast, Evgenii Somov won with a time of 1:56.11 to make it a breaststroke sweep. For the women’s race, Morgan Friesen touched second with a 2:09.77 for the Cardinals.