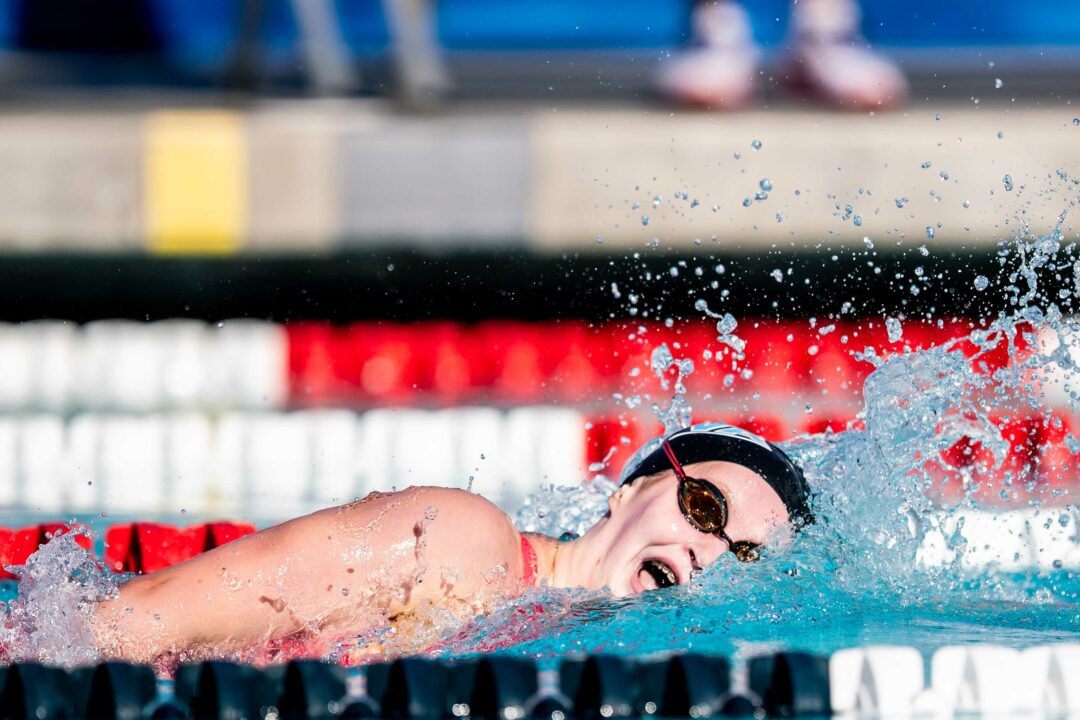 The CIF-SS Division 1 finals session took place this past Friday in Mission Viejo, featuring some of the fastest high school swimmers in California. Stock photo via Jack Spitser/Spitser Photography

The CIF-SS Division 1 finals session took place this past Friday in Mission Viejo, featuring some of the fastest high school swimmers in California. Perhaps the greatest swim of the weekend came in the boys 500 free, where Loyola junior Rex Maurer threw down an incredible 4:13.90 to win, becoming the fastest 17-year-old in U.S. history in the event. You can read more about Maurer’s swim here.

Maurer would also win the boys 200 free at these Championships, clocking a 1:34.95. Unlike his 500 free performance later in the session, Maurer’s 200 free wasn’t a personal best. His best time stands at 1:34.59, which he swam at the 2021 Speedo Winter Junior Championships – West meet this past December.

Maurer was also a member of the Loyola boys 400 free relay, which won in a new CIF-SS Division 1 Record of 2:58.86. Maurer led the team off in 43.76, a new personal best and a Division 1 Record as well. Zachary Larrick went 2nd in 44.58, then Max Cahill clocked a 45.83 on the 3rd leg, and William Kim anchored in 44.69. The future is bright for Loyola in this event, as Maurer, Larrick, and Cahill are all juniors, and thus will be returning next season.

St. Margarita freshman Teagan O’Dell was exceptional over the weekend as well, winning all 4 of the events she swam and breaking Division 1 records in 3 events. Individually, O’Dell dominated the final of the girls 200 IM, swimming a new lifetime best of 1:55.46 to touch the wall as the only swimmer in the field under 2:00. She was phenomenal across the board with the swim, splitting 25.09 on fly, 28.39 on back, 34.56 on breast, and 27.42 on free, all 4 of which were the fastest splits in the field. The swim also cracked the Division 1 record, indicating the freshman is going to be a force to be reckoned with in the division for years to come.

O’Dell also competed on the St. Margarita girls 200 medley and 400 free relays, both of which won in Division 1 Record fashion. Despite backstroke likely being O’Dell’s best stroke, she was given breaststroke duties on the relay, splitting an impressive 27.53. It was junior Macky Hodges who handled backstroke for the team, splitting 25.17, the fastest back split in the field by over a second. Senior Justina Kozan swam a 24.25 on the fly leg, and senior Lindsay Ervin anchored in 22.61. The team combined for a 1:39.56, establishing a new Division 1 Record.

In the girls 200 free, Justina Kozan sped to victory in 1:45.09, breaking away from Corona del Mar junior Maggie Schalow (1:47.41) on the back half of the race. Both Kozan and Schalow are coming off a ton of racing, as both swimmers competed at the U.S. International Team Trials in Greensboro, NC the week before the CIF-SS Championships took place. They’re far from the only swimmers at this meet who competed in Greensboro, however, this duo went head-to-head in both their individual events over the weekend.

They went at it again in the girls 100 fly, with Kozan again coming out on top in 52.65. Schalow took 2nd in 52.90, marking a new personal best for the junior. As for Kozan, the swim was just off her personal best of 52.41, which she set back at Speedo Sectionals meet in 2019. Perhaps the most fun part of the Kozan/Schalow showdowns is that we’ll get to see them race each other again at the State Championships this weekend.

Harvard Westlake senior Ronald Dalmacio was another double event winner on the day, taking the boys 50 free and 100 back. In the 50 free, Dalmacio sped to a 20.08, touching a quarter of a second ahead of anyone else. He then went on to swim a 47.80 in the 100 back, out-splitting the field on both 50s of the race.

A fun talent to watch. Kid can swim.

Looks like Teagan O’Dell has missed her taper for trials 2 weeks ago. She underperformed there by swimming only 2.12.38 in the 200 back (PB of 2.09.57 last summer) and 2.16.75 in the 200 IM (PB of 2.12.53 last summer).
Or I’m wrong and her goal was to peak for that California meet in yards which would be weird.
Or her long course is simply not there yet.
She would have finished 14th at NCAAs with her 200 IM time of 1.55.46. Not bad for a high school freshman.
What is sure is that we have not seen the best from her this year in long course. Hopefully this will happen next summer at US junior nationals.
Very special talent.

Super talent, but many top scy swimmers who have great powerful walls & UW simply do not shine as bright lcm. Excelling at scy & lcm rely on completely different strengths, some swimmers are fortunate to have both.

I think she knew she would not make it to the world team at least this year. So, she peaked later. In fact Rancho Santa Margarita does go for it. Both her and Kozan are on the psych sheet for state since they have a good chance but even if one of them decided not to swim at state Rancho Santa Margarita Catholic school could win the state title. Coach interview, want to bring back the winning days in Orange County like the 1970’s, 1980’s, and 90’s. While people complain about Ranch Santa Margarita recruiting and I think there is some recruitment Mission Viejo according to their coach won 11 CIF girls titles while Ranch Santa Margarita won 8 titles… Read more »