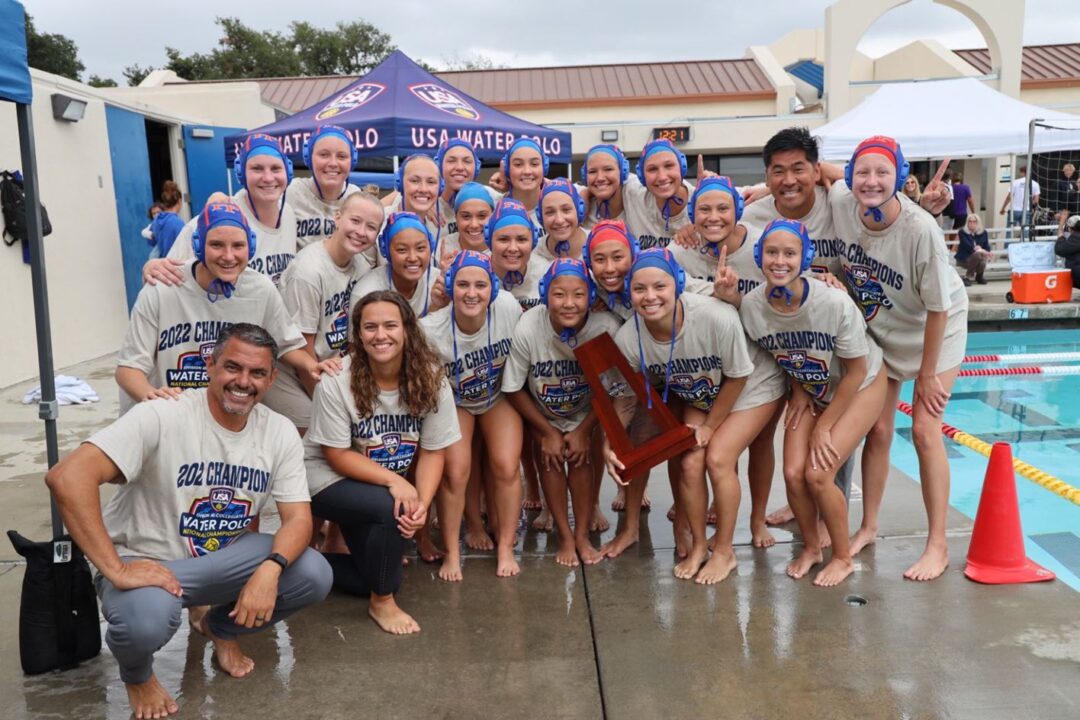 The Sagehens defeated Augustana College and Whittier College on their way to the title. Current photo via USA Water Polo

Claremont, CA – May 9 – The inaugural USA Water Polo Women’s Division III Collegiate Championship wrapped up yesterday at Haldeman Pool with the Pomona-Pitzer Sagehens capturing the National Championship. The Sagehens defeated Augustana College and Whittier College on their way to the title.

The Championship final on Sunday afternoon was a tight affair from start to finish. The Pomona-Pitzer Sagehens rode their home crowd to three quick goals in the first three minutes of play before the Whittier Poets got on the board behind two goals from senior Natasha Velez. After the first quarter, Pomona-Pitzer led 4-2. In the second, each team scored only once to bring the halftime score to 5-3 in favor of the Sagehens. Sophomore Abigail Wiesenthal scored the only goal of the third period just over one minute in to increase the Pomona-Pitzer lead to 6-3.

In the final frame, senior Amelia Bennett scored for Whittier within the first minute to cut the deficit to two before senior Lucie Abele countered for Pomona-Pitzer just over two minutes in to increase their lead back to three. Whittier senior Alex Lopez scored thirty seconds later to bring the difference back to two, 7-5. That is where the score remained for the next three minutes of the quarter until Sagehen sophomore Namlhun Jachung stole the ball and took it the distance of the pool to score on the counter attack with 1:54 remaining. That goal pushed the Pomona-Pitzer lead back to three and effectively ended Whittier’s hopes at a comeback. The Poets tacked on a power play goal with 0:29 seconds to go, but the Sagehens held on for the 8-6 win.

Namlhun Jachung was named MVP after scoring two goals, handing out four assists, and earning six exclusions in the final. The Sagehens were aided by Abigail Wiesenthal and Lucie Abele, who each scored twice in the victory as well. Alex Lopez, Amelia Bennett, and Natasha Velez scored two goals a piece to make up the entirety of the Poets’ scoring. A replay of the final can be seen by clicking here.

In the semifinal round on Saturday, Pomona-Pitzer bested Augustana College 21-6. Senior Nadia Paquin and sophomore Abigail Wiesenthal led the way for the Sagehens with four goals each while Augustana’s Alyssa Fricker scored thrice for the Vikings in the loss.

On the other side of the bracket, Whittier College beat Austin College, 15-9, to advance to the Championship game. Natasha Velez scored five times and freshman goalkeeper Alexys Puche recorded 15 saves in the cage for the Poets. Austin College seniors Sophie Oliver and Brooke Le each scored two goals for the ‘Roos in defeat.