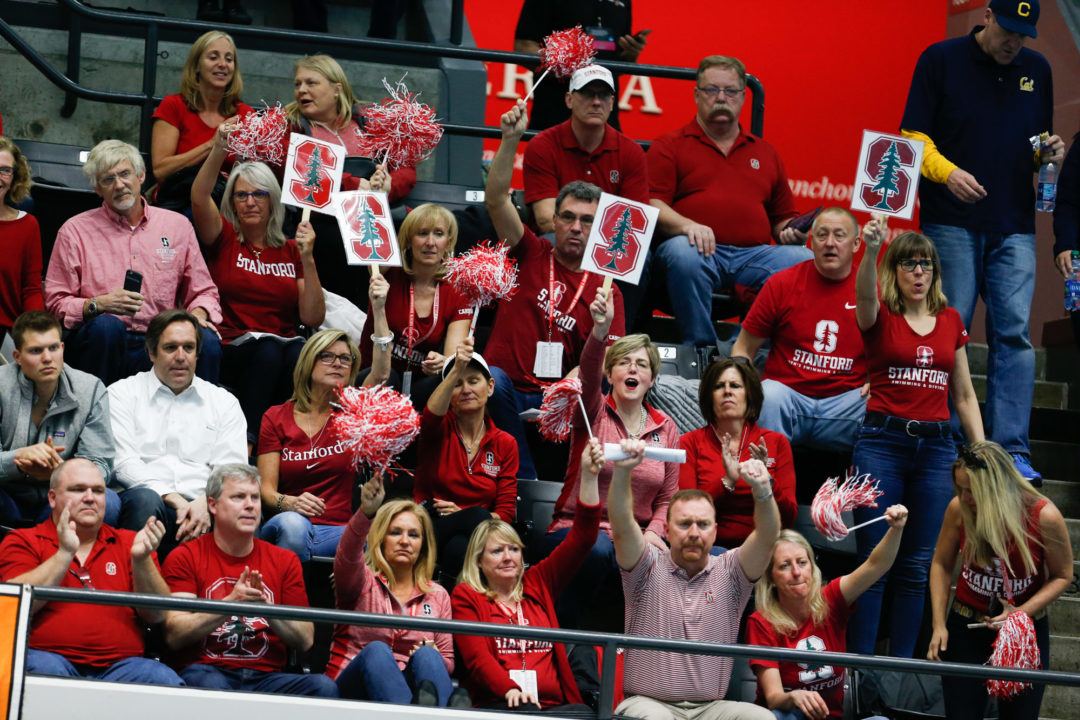 Freshman Lauren Green was among the swimmers to win multiple individual races on Thursday as the Cardinal took down Pac-12 foe Oregon State at home. Archive photo via Tim Binning/TheSwimPictures.com

Stanford (2-0, 2-0 Pac-12) posted the fastest time in every event for the second straight meet. The Cardinal won its 17th straight dual meet and 16th in a row over the Pac-12. It also marked the 12th consecutive dual victory on The Farm, dating back to 2014.

Diving did not compete on Thursday, but will Friday. Stanford hosts defending ACC champion N.C. State on Friday at 1 p.m. The meet at Avery Aquatic Center is free, and for those that cannot make it, the meet will be streamed on Stanford Athletics Facebook » facebook.com/stanfordathletics/.

STANFORD, Calif. – The Oregon State swimming program took on Stanford on Thursday afternoon at the Avery Aquatic Center to continue the Pac-12 portion of the schedule. The Cardinal took the decision in the dual meet over the visiting Beavers, 170-77.

“A lot of good swims this afternoon,” said head coach Jennifer Buffin. “This team put in a lot of work in October. We were excited to come into Stanford and to get back to racing.

“This team stepped up after a day of travel. We’re looking forward to getting rest and having another good day of racing tomorrow.”

Oregon State got strong performances in the water from several members, including freshman Fernanda Rodriguez (Portland, Ore.) who set three in-season bests in the pool, including her leg on the ‘A’ 200 medley relay team.

Rodriguez touched the wall in 30.27 on her leg of the relay to lead OSU to a third-place podium finish behind an overall time of 1:46.73 to improve the standard on the team’s relay time. Rodriguez also turned in a time of 1:07.07 in the 100 breast for a third-place finish, edging out senior Allie Kilroy‘s (Boise, Idaho) posted time of 1:07.09 on the leaderboard as both Beaver swimmers finished with strong performances.

Rodriguez closed her time in the pool with a time of 2:12.92 in the 200 IM for a second-place finish in scoring in the event.

Senior captain Noemie Midrez (Verviers, Liège, Belgium) had one of her best performances of the early season in the 100 free with a time of 54.24 to finish second in scoring in the event for OSU.

Junior Arianna Letrari (Bolzano, Italy), fresh off her strong showing at the Pac-12 vs USA Swimming College Challenge, kept her momentum in the water with an in-season best time of 52.81 on her leg of the 400 free relay. The Beavers posted a time of 3:36.47 in the relay to finish second in scoring.

The Beavers will remain in the bay on Friday and will take on Cal starting at 2 p.m. PT at the Legends Aquatic Center.